The GF13-013NR Bolt Gundam is a Mobile Fighter and Neo Russia's entry in the 13th Gundam Fight. It is featured in the Mobile Fighter G Gundam series. The unit is piloted by Argo Gulskii.

Unlike the other mobile fighters in the Gundam Fight, the Bolt Gundam is powered by a powerful "Victor Engine", which makes it the strongest mobile fighter in terms of raw strength. It complements its power with exceptionally strong armor that can shrug off most ordinary attacks. This combination of strength and durability suits Argo's fighting style, which relies heavily on enduring enemy blows to put him in a position to deliver overwhelmingly powerful counterattacks. Argo frequently uses the Bolt Gundam's durability to get face-to-face with his foes, allowing him to use his Gundam's superior strength to lift, crush, and throw his opponent.

The primary weapon of the Bolt Gundam is the Graviton Hammer, a flail-type weapon that consists of a dense spherical hammer that is manipulated via a beam chain. The weapon can be used in a variety of methods for both offense and defense and increases the Bolt Gundam's reach in melee combat, allowing it to utilize its physical strength at the maximum possible range. When not in use, the hammer portion is stored in the Gundam's left shoulder, while two beam emitter "hilts" are stored in recharge racks in the gauntlet-like armor on its forearms.

As with most melee-focused mobile fighters, the Bolt Gundam lacks a ranged weapon outside of the standard vulcan guns on its head.

In the events leading up to the Shinjuku arc, the Bolt Gundam is infected with DG Cells. Although it doesn't have any visible changes in the TV series, the manga adaptation Super-Class! Mobile Fighter G Gundam: Shinjuku/Undefeated of the East!, shows the Bolt Gundam with a new, mutated design that incorporates parts resembling the JDG-009X Death Army. The infected Bolt Gundam has noticeably heavier armor with its upper body greatly increased in size. It has enhanced strength, but is never seen using the Graviton Hammer.

A flail-type weapon.  The head is stored in Bolt's left shoulder while the handle in its right forearm.  When activated, the Bolt Gundam fires the head as a projectile weapon followed by deploying the handle into its right hand which it uses to project a beam chain that attaches to the head.

Argo's signature finisher, which he learned during his training in the Guiana Highlands by tapping into the power of his Shuffle Alliance crest.  When activated, the Bolt Gundam strikes the ground with its fist, triggering a seismic upheaval that raises the rock around him.  Variations of the technique include using it to create a series of rock spires that impales/immobilizes an opponent, raising a shield to protect God Gundam from Gundam Heaven's Sword, and creating a tunnel for Domon to safely cross the battlefield in order to reach the Devil Gundam.

Seen in episode 38 Domon vs. Argo! Charging Bolt Gundam. After using the Gaia Crusher, Bolt Gundam charges up both hands with energy and directly strikes the enemy at close range. This move is powerful enough to overpower GF13-017NJII God Gundam's Bakunetsu God Finger, but it puts too much strain on the Bolt Gundam that one of its legs become weakened.

A variation of the Sakuretsu Gaia Crusher, performed by God Gundam, Dragon Gundam and Bolt Gundam in unison, as all 3 fighters slam their fists into the ground, shuddering the rocks around them. It was created in order to create a tunnel so that Domon in God Gundam can bypass Gundam Heaven's Sword and head straight to where the Devil Gundam is as Bolt Gundam and Dragon Gundam holds the Heavenly King back.

A combination attack with GF13-011NC Dragon Gundam, used to defeat the Gundam Heaven's Sword. The Dragon Gundam uses the Shin Ryuusei Kochouken to land on top of an airborne target, driving it towards the ground. Once the target is in range, the Bolt Gundam uses its Graviton Hammer technique, striking the foe and binding it in the energy chain of the Bolt Gundam's flail. To finish the attack, the Dragon Gundam drives its spear into the victim's weak point, inflicting heavy damage. The technique was named in Super Robot Wars J.

At the beginning of the 13th Gundam fight, Neo Russia's initial plan was to hide the Bolt Gundam in Siberia, waiting for Gundam Fighters to come search for it. When a Gundam Fighter did appear Neo Russian authorities would arrest them and throw them into the prison where Argo was being held. Argo would act as a spy among the prisoners while the guards interrogated the Gundam Fighters to learn the location of their Gundams so Neo Russia could simply take them and dismantle them. The purpose of the plan was to keep the Bolt Gundam out of fights until the Finals, while at the same time allowing Neo Russia to study the technology of the captured Gundams.

After the Bolt Gundam was forced to fight Neo Japan's Shining Gundam, Neo Russia reworked their plan. Instead of letting Gundam Fighters come to them, they would seek them out and participate in straight up fights. 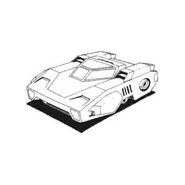 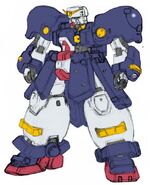