The GF13-011NC Dragon Gundam is the mobile fighter representing Neo China in the 13th Gundam Fight. It was featured in the anime Mobile Fighter G Gundam. The unit was piloted by Sai Saici.

Developed by the space colony of Neo China, the Dragon Gundam is assigned to Sai Saici, the young heir to the martial arts traditions of the legendary Shaolin Temple. This mobile fighter is both agile and highly adaptable, able to fight in any environment from sandy deserts to the depths of the ocean. In addition to the extendable, fire-breathing Dragon Claws built into its forearms, the Dragon Gundam is armed with twelve Feilong Flags - multipurpose beam weapons which can be used to pin down enemies, and also function as both spears and protective shields. Perhaps its sneakiest weapon is the dagger-tipped queue attached to its head, a close-range weapon which has taken more than one foe by surprise.

Before Shinjuku arc, Dragon Gundam got infected with DG Cells. Although it doesn't have any visible changes in the TV series, Super-Class! Mobile Fighter G Gundam: Shinjuku/Undefeated of the East!, however gives it a new design that incorporated parts resembling the JDG-009X Death Army. The arms of DG-Cells infected Dragon Gundam have a different design from each other with the right arm appearing to be a Death Army-like creature. It has enhanced speed and power, but never seen using the Feilong Flags.

A pole weapon that can generate a variety of beam constructs. Sai mostly used them offensively by combining two flags into a long staff that could produce a physical or energized spearhead at its tip or a beam flag to block enemy attacks. The beam flags could also be thrown around the battlefield to confuse and trap an opponent. The flags are capable of automatically flying back to the Gundam after being deployed. In Super-class! Mobile Fighter G Gundam, Sai's Gundam also displays the ability to use Feilong Flags as nunchaku.

A dark weapon mounted on the back of the head. The tip is a super-hard cutter. It can be wielded to slash and stab enemies.

A fang-like weapon mounted on the forearms that resemble a dragon head. It has a freely extendable structure, and can bite and crush enemy machines with its fangs, and also emits flames.

A flamethrower equipped inside the Dragon Claws. Since it radiates from within the arm, it can continue to radiate while the dragon claw is extended. Can be used in space without problems.

A move from the school of Shaolin. The Dragon Gundam jumps high and gives a sequence of speedy kicks to the opponent.

An attack used against the GF4-001NE Mummy Gundam IV. It begins with Dragon Gundam taking hold of all of its Feilong Flags and spinning them together like a wheel before tossing them at the target, surrounding them in a circular fashion. It is then followed up and finished by a stream of Dragon Fire, the energy produced by the flags intensifying its power to a greater degree as it produces an explosive column of flame that consumes the target. The flags then return on Sai's command, completing the attack. In the English Dub it is known as "Dragon Fire-Storm"

The Dragon Gundam's ultimate attack and the pinnacle of Sai's Shaolin martial arts, only accessible in Hyper Mode. After absorbing an immense amount of energy through the gem in its chest, the Dragon Gundam manifests greenish-yellow flames behind it in the shape of a swallowtail butterfly's wings. These flames vastly enhance the Gundam's capabilities, enabling it to fly and envelop itself in an intense aura that overcame the GF13-017NJII God Gundam's God Finger attack (before Domon countered by using the God Finger with the left hand). It was believed to be a suicidal technique, but Sai survived his first use of it, and it became a part of his regular arsenal.

A technique borrowed from Argo Gulskii, it was used during the Battle Royale together with the Bolt Gundam and God Gundam. By tapping into the power of the Shuffle Alliance crest, the Dragon Gundam strikes the ground with its fist, triggering a seismic upheavel that raises the rocks around the Dragon Gundam. It was used to create a tunnel for Domon to escape to confront the Devil Gundam.

A combination attack with GF13-013NR Bolt Gundam, used to defeat the Gundam Heaven's Sword. The Dragon Gundam uses the Shin Ryuusei Kochouken to land on top of an airborne target, driving it towards the ground. Once the target is in range, the Bolt Gundam uses its Graviton Hammer technique, striking the foe and binding it in the energy chain of the Bolt Gundam's flail. To finish the attack, the Dragon Gundam drives its spear into the victim's weak point, inflicting heavy damage. The technique was named in Super Robot Wars J.

A dark colored version of the Dragon Gundam. There are no technical changes from the original other than the dark coloration, which allows it to blend into the dark of night. 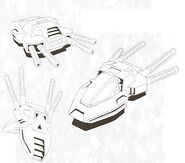