The Gundam Rose is a graceful, elegant mobile fighter created by the space colony of Neo France. It's assigned to the chivalrous nobleman George de Sand, whose fencing skills allow him to make good use of the mobile fighter's Chevalier Saber. The cape-like shield on the Gundam Rose's left shoulder houses dozens of remote-controlled Rose Bits, which either attack with their built-in beam guns, or pierce an enemy's armor and then explode. These Rose Bits can surround a foe and attack it from all directions at once in a coordinated Rose Screamer attack, and can also generate an energy field to trap the Gundam Rose's target.

Before Shinjuku arc, Gundam Rose got infected with DG Cells. Although it doesn't have any visible changes in the TV series, Super-Class! Mobile Fighter G Gundam: Shinjuku/Undefeated of the East!, however gives it a new design that incorporated parts resembling the JDG-009X Death Army. The DG-Cells infected Gundam Rose has a more cloth-like cloak shoulder armor and can launch more bits at once. The rose bits now have an Death Army-like eye in the middle of their petals, and the chevalier saber has become a physical blade with vine coiled around it.

The main feature and weapon of the Gundam Rose. These rose-shaped autonomous weapons are launched from the Gundam's cape when it unfolds from the shoulder and each carries a single beam gun. The Gundam Rose seems to carry a countless number of these weapons and launches them in a flurry. Because of their sheer numbers and speed, they can easily shred an opponent's Gundam with a barrage of beam fire and serve as the basis of Gundam Rose's special attacks. During George and Chibodee's battle with the massive Grand Gundam during the finals, Rose lent one of its bits to Gundam Maxter which the latter used as a bullet for its Gigantic Magnum to obliterate the Grand Gundam's cockpit.

Twin automatic projectile guns, the vulcans are mounted in Rose's head and are used for warding off enemy movement.

A unique melee weapon stored in a sheath on Rose's left hip, the Chavalier Beam saber combines a solid matter blade that is enveloped with a beam blade when activated. Befitting George's style of combat, the Chevalier saber incorpoates a cup shaped hand guard and is wielded similar to a fencing foil emphasizing thrusting attacks to pierce George's enemies.

George's signature attack where he launches the rose bits to fly around the opponent and generating an energy cage to confine them.

A technique George developed for his fight with Domon by tapping into the power of his shuffle alliance crest. Similar to the Rose Screamer, except instead of randomly flying around the opponent, the Rose Bits encircle and spin around a rival gundam in a cyclone pattern as they attack, creating a vortex of energy that traps and immobilizes the opponent.

As Neo France's entry for the 13th Gundam Fight, the GF13-009NF Gundam Rose was a throwback to old days of chivalry and honor in the Middle Ages. Gundam Fighter George de Sand was no exception to this and adhered to a strict code of chivalry that governed his life. Unlike the selection of other Gundam Fighters, George's appointment as Neo France's Fighter was the result of a tragedy. In a tournament to select their nation's fighter, newcomer George fought against Jean-Pierre Mirabeau and his Mirage Gundam at Versailles. Determined to become Neo France's Gundam Fighter, Mirabeau placed the audience in danger and used them as a shield to prevent George from attacking. Disgusted by this act, the King disqualified Mirabeau and selected George as the Fighter. Mirabeau attempts to kill the King, and the missiles he fires kill many bystanders, forever marring the day as the Tragedy of Versailles. This event would haunt George until a later encounter with Mirabeau, who escaped from prison in space.

George was a master fencer, and it is no surprise that the Gundam Rose's main weapon is the Chevalier Beam Saber. Far more effective were the Gundam Rose's many rose bits, which are mobile weapons controlled by George's concentration. The rose bits can be deployed from many directions to attack an opponent at multiple angles. The bits can work together to form George's final move, the powerful Roses Screamer. In an encounter with Domon's GF13-017NJ Shining Gundam, a decisive winner was not decided due to George stopping the battle to save the Eiffel Tower from destruction. As a member of the Shuffle Alliance, George also trained in the Guyana Highlands and developed a Hyper Mode and a new final move, the Roses Hurricane. This new move caused the rose bits to spin around rapidly and create a cyclone of energy that trapped the opponent and rendered them helpless. However, using a new move of his own, Domon was able to counter the Roses Hurricane. The Gundam Rose entered the Finals and the Battle Royale and participated in the final battle against the JDG-00X Devil Gundam.

The battle ended with Domon winning the fight and destroying the Devil Gundam. George later returned to Earth with the rest of the Shuffle Alliance. 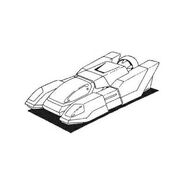