The GF13-006NA Gundam Maxter is a Mobile Fighter for the nation of Neo America built for the 13th Gundam Fight. It was featured in the anime Mobile Fighter G Gundam. It is piloted by boxer Chibodee Crocket.

By using the Mobile Trace System, the Maxter Gundam is capable of fully performing Chibodee's boxing fighting style to attack. When the Maxter Gundam is equipped with its fighting knuckles its ultimate attack is its Cyclone Punch, a punching attack that unleashes a swirling vortex of wind. Against more powerful opponents Chibodee has his Gundam enter Boxing mode, purging the front chest armor (revealing a muscular-like inner armor) and using the Gundam's shoulder armor as punching gloves. With the gloves equipped, Gundam Maxter can unleash its ultimate attack: Burning Punch, a punching technique that launches a powerful stream of fire. Later Chibodee will develop a new ultimate attack, the Gounetsu Machine Gun Punch, a rapid punching attack that overwhelms his opponents.

In the event that Chibodee fights an opponent that he can't get close to or that he simply doesn't want to fight in close range the Maxter Gundam is equipped with two gigantic magnum pistols that are stored on its hips.

Before Shinjuku arc, Gundam Maxter got infected with DG Cells. Although it doesn't have any visible changes in the TV series, Super-Class! Mobile Fighter G Gundam: Shinjuku/Undefeated of the East!, however gives it a new design that incorporated parts resembling the JDG-009X Death Army. The DG-Cells infected Gundam Maxter has increased punching power but is never seen using the Gigantic Magnum or its Boxing Mode.

Giant revolver like guns stored on its hip. They shoot solid bullets.

A pair of knuckle dusters mounted on its forearms that Maxter uses in normal mode. When activated, they flip over the fists, increasing the force of Maxter's punches while maintaining its defensive stats.

A pair of boxing gloves mounted on its shoulders as armor in normal mode which it transfers onto its fists in boxing mode.

A combination shield/rocket powered surfboard able to travel over water or through the air. Used primarily for transportation or for Chibodee to make a flashy entrance.

Chibodee's basic attack, a punch that generates a cyclone gust capable of lifting an opponent clear into the sky. Cyclone punch also has defensive abilities as seen when Chibodee used it to deflect a volley of missiles fired at him by a crooked Department of Defense agent during his initial match with Domon.

A more powerful technique, typically only used by Maxter in Boxing mode. Chibodee unleashes a punch charged with flaming energy powerful enough to shatter a boulder at least the size of Maxter. The attack can be performed either at close range or to fire a blast of energy from Maxter's fist.

Chibodee's ultimate attack, which he developed for his match against Domon in the finals by tapping into the power of his Shuffle Alliance crest. The attack enables Maxter in boxing mode to unleash multiple shockwave blasts with one punch to completely overwhelm the opponent.

As the 13th Gundam Fight began, one of the favorites was Gundam Fighter Chibodee Crocket of Neo America. As a champion boxer in the Neo America, Chibodee was the epitome of the American dream. Starting out as a poor boy in New York City, his mother worked hard to get him to the Neo American space colony so that he could make something of his life. A tragic incident involving terrorists disguised as clowns would return to haunt Chibodee years later during the Gundam Fight Finals.

As a champion boxer, Chibodee's GF13-006NA Gundam Maxter was designed to take advantage of his skills. During battle, the armor mounted on the Maxter's shoulders could be removed and placed over the hand as powerful boxing gloves. The front chest armor could also be removed to reveal a powerful interior. Other weaponry included two hip-mounted Gigantic Magnum guns as well as a shield that could double as a surf board for extended flight. Chibodee's main finishing moves included the Cyclone and Burning Punches, which functioned as their name implies. In one of the first fights in the tournament Chibodee would face a crushing defeat at the hand of Neo Japan's Domon Kasshu and his GF13-017NJ Shining Gundam. This defeat resulted in a desire by Chibodee to beat Domon, even after joining Domon as a member of the Shuffle Alliance. While training in the Guyana Highlands, Chibodee developed his own Hyper Mode and a new final move, the Gounetsu Machine Gun Punch. This new move allowed Chibodee to throw multiple punches at an opponent to overwhelm them, but it was ultimately defeated by Domon and his GF13-017NJII God Gundam. Despite two losses to Domon, the Maxter qualified for the Finals and the Battle Royale at the end of the tournament and participated in the final battle against the JDG-00X Devil Gundam. 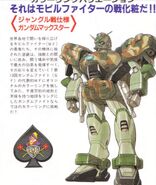 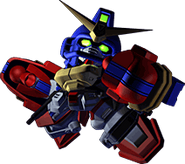