The GF13-002NGR Zeus Gundam is a mobile fighter from Mobile Fighter G Gundam. It is piloted by Marcelot Cronos of Neo Greece.

This mobile fighter represents the space colony of Neo Greece, and is considered to be the number one contender in the 13th Gundam Fight. Like its pilot, the twelve-foot giant Marcelot Chronos, the Zeus Gundam is huge and overwhelmingly powerful. While its large wings enable this mobile fighter to soar through the air, it usually rides into battle in a unique chariot drawn by the mobile horse Hercules. Without even dismounting from its chariot, the Zeus Gundam can call down the Lightning of Judgement and smite its opponent with a devastating thunderbolt.

As the finals began, the massive Marcelot Cronos was the favorite to win the tournament. However, he was defeated by Domon Kasshu's GF13-017NJII God Gundam. Marcelot would later return to trouble Domon again, and during the battle royale he was infected with DG cells and ultimately killed by Domon. 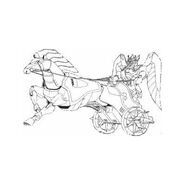 Attacking with "Lightning of Judgement"