The GF13-001NHII Master Gundam is a mobile fighter that appears in the TV anime Mobile Fighter G Gundam.

A state-of-the-art mobile fighter made by Neo Hong Kong, and a developmental improvement of the Kowloon Gundam. Its body is made up of DG cells, allowing it to disguise itself as the Kowloon Gundam. Although its body is made up of DG cells, it is completely controlled by Master Asia's strong mental power, so it does not self-propagate or self-evolve, and uses its abilities only for self-regeneration. This machine has strong characteristics as a dedicated fighting machine developed from the Kowloon Gundam, and its flexible joint structure and thrusters allow it to move in a variety of ways, reproducing many of the techniques of Master Asia. It has two wing shields on its back, and can transform into two modes: Normal Mode, in which the shields are deployed to cover the entire body, and Attack Mode, in which the shields are folded up on its back for all-out combat. It is a member of the Devil Gundam Corps, the Four Heavenly Kings, and is treated as the leader among the four Gundams.

A cloth-like weapon generated by a beam. It is generated by the Mobile Trace System in conjunction with Master Asia's waist cloth in the cockpit. In addition to cutting targets like a beam saber, it can also entangle enemy machines.

A hand blade with a telescopic mechanism that instantly extends and retracts from the elbow to strike. The Master Gundam's manipulator has a sharp shape suitable for striking, and is powerful enough to easily penetrate enemy armor.

The elbow is controlled by a beam wire, and the hand blade is used to strike enemies at a distance. Once launched, it can be retrieved and reconnected by pulling back the beam wire.

A small beam cannon with five emitters built into the bottom of the left and right palms.

A special move with a power that surpasses the Shining Gundam's "Shining Finger" and is comparable to God Gundam's "Erupting God Finger". It can be transformed into a palm strike after stabbing an opponent with a ki-infused hand, or into an attack that crushes the opponent in its grip. It can also be used in "Normal Mode" by deploying part of the wing shield.

A technique that uses the Darkness Finger to unleash a blast of energy at the opponent.

The Master Gundam spins in a horizontal whirlwind as it flies along, allowing it to clear whole fields of enemies.

With its arms in the air, the suit draws the 7 characters of "十二王方牌大車" in a circular wheel-like pattern using the Siddham script. These characters transform into miniature Master Gundams, and are launched and adhered at key points on their opponent's body. Via the use of the technique "Kizan Shoukoujin", all the miniatures then return to the main body, to suppress further use of energy.

The Master Gundam launches a furious wave of punches, leaving afterimages as it attacks, and then the opponent explodes as Master Gundam makes a kicking pose along with the shout of "爆発！" ("Bakuhatsu", literally "Explode!").

The ultimate technique of the School of the Undefeated of the East. An 'earth-splitting, heaven-piercing' attack, usually launched as a devastating wave of energy.

A piloting system for controlling mobile fighters. Normally, a pilot suit with nanomachines woven into it called a fighting suit is worn, but Master Asia wears normal clothes with fighting suit functions built in, according to his own preference. This is a technology used in the early Gundam Fights, and even though it is an early technology, it perfectly traces the Master's movements. In the manga version serialized in Comic Bombom, Master Asia wears a fighting suit that mimics his own attire.

This machine first appears in the old Shinjuku district of Tokyo during the Survival Eleven in the 13th Gundam Fight. After that, it mimics the Kowloon Gundam and Master Asia approaches Domon Kasshu to bring him in, but Rain Mikamura interferes and reveals its true nature. In the ensuing battle, Master Asia would soundly defeat his former student and the Shining Gundam. When Domon retreated to the Guiana Highlands to further his training, Master Asia secretly followed with his Master Gundam in tow.

At the end of Domon's training, the two Gundam fighters faced each other once again. Though Master Asia initially overpowered the Shining Gundam, the battle would end in the destruction of the Master Gundam at the hands of Hyper Mode God Gundam. However, the Master Gundam possessed self-regeneration capabilities thanks to the Devil Gundam, and soon reappeared in Neo Hong Kong for the finals. According to Gundam Fight procedures, the Gundam Fighter representing Neo Hong Kong, Master Asia, switched from the Kowloon Gundam to this machine. Because Master Asia was the previous Gundam Fight champion, he and the Master Gundam would not participate in the tournament until the final round.

A custom Master Gundam Gunpla that made an appearance in the Gundam Build Fighters finale, piloted by Master Chinan accompanied by Mr. Ral in his Gouf R35 to aid Sei and his companions in battling swarms of Mocks. An attack similar to the Sekiha Tenkoyken was used to destroy several Mocks. The Master Gundam and Gouf R35 then utilized their signature combination technique, wiping out numerous Mocks before continuing in their assault against the remaining enemies. The suit is noticeable for its gold shoulders, side skirting and kneecaps.

In Super Robot Wars Reversal, a fully revived Master Asia will gain a man-made version of the Master Gundam to join the other heroes should players rescue him and fully trigger the Shin Getter Robo vs. Neo Getter Robo's God Getter event. As it was man-made and not built with DG cells, Rain Mikamura warns him that it is not as strong as the original Master Gundam, though Master Asia tells her its the skill of its pilot that draws out its power, not what it's made of. 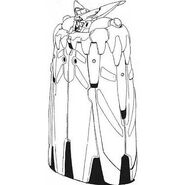 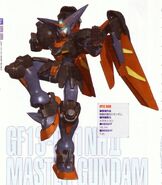 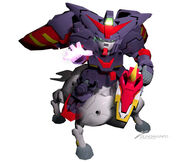 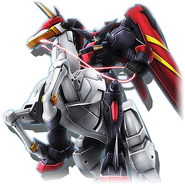 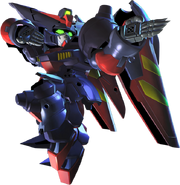 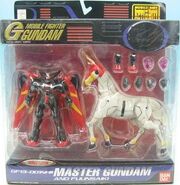 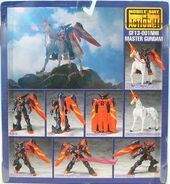 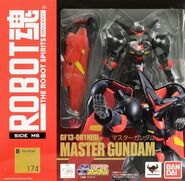 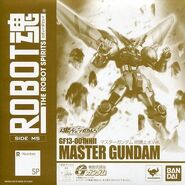 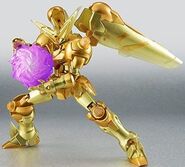 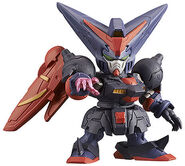 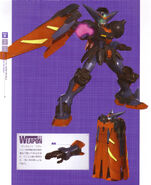