The GBN-Guard Frame (GBN-ガードフレーム, GBN-Gādo Furēmu?) (aka Guard Frame) is a Gunpla that appears in the Gundam Build Divers television series.

A security Gunpla deployed throughout GBN's Dimension, it acts on the instructions of the Game Master and other administration personnel.[1] As it was created using completely new designs, the GBN-Guard Frame has no base Gunplas, but its concept of being a versatile and expandable mass production mobile suit is thought to be taken from the RGM-79 GM.[2]

The GBN-Guard Frames' focus on versatility allows them to adapt to the various terrains they come across due to their operational purposes, and their simplistic frame allow for expandability.[2] Additionally, they have an alternate canopy-type head for operating in Dimension with system errors.[2] The GBN-Guard Frames have standard performance levels, but they can be greatly enhanced via the Game Master activating a special parameters setting when ordering them to be on duty.[2] Thus, it is strongly advised that Divers do not engage the GBN-Guard Frames during missions, even if tempted.[2]

While originally existing in data form within the GBN, the GBN-Guard Frame's simplistic concept become popular among certain professional Divers, and it later became available as normal Gunpla.[2] Utilizing its expandability, Divers have customized it by building original outer armor pieces, and it is also said that there are special versions with different armor created by members of the administration.[2]

A standard beam firing armament for mobile suits.[2] The beam rifle for this Gunpla is a compact model for ease of handling and excels in rapid-firing capabilities.[2] A long barrel can also be equipped, boosting the weapon's accuracy and power.[2]

Two types of heads exist for this Gunpla; a standard full-face visor and a canopy-type version that can adapt to Dimensions with system errors and can withstand electromagnetic noise.[2]

After a series of analysis by the GBN administration determined that a participant of the Nadeshiko-athlon was connected to the bugs that have been occurring lately, Game Master deployed a number of GBN-Guard Frames to check on the participants. When one unit detected Sarah as an unidentified player, it attempted to apprehend her, but was stopped by Ms. Tori, the developer of GBN. The GBN-Guard Frames later accompanied Game Master and his subordinates when they went to Build Divers' Force Nest to apprehend Sarah. After realizing that Sarah had left, Game Master ordered his subordinates and the GBN-Guard Frames to search for her.[3] 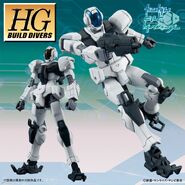 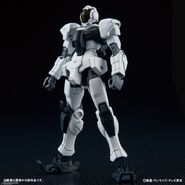 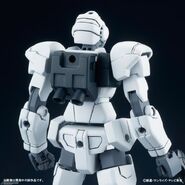 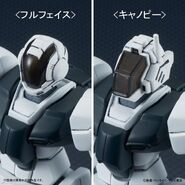