Developed by the Earth Alliance to counter ZAFT's TMF/A-802 BuCUE and TMF/A-803 LaGOWE, the Wild Dagger is based on the GAT-02L2 Dagger L and incorporated data gained from analyzing the ZGMF-X88S Gaia Gundam. The 'Q' in its model code stands for 'quadruped', and like the word implies, the Wild Dagger can transform into a four-legged Quadruped Mode that rivals the BuCUE and LaGOWE in moving on uneven terrain. Like the transformable GAT-X303 Aegis Gundam and GAT-X370 Raider Gundam, the suit utilized a X300 series frame as indicated in its model number. Despite being transformable, the Wild Dagger is cheap to produce as it shares many parts with Dagger L.

As the focus of the Earth Alliance's war turned to counter insurgency, the Wild Dagger was tuned to meet this change. The Wild Dagger is armed with a gatling gun in its Quadruped Mode's head, which can be replaced with a beam boomerang, a smoothbore cannon in its tail and several other armaments used by the Dagger L. The suit also has a multipurpose turret on its lower back for mounting various weaponry. During counter insurgency operations, the psychological pressure that the Wild Dagger placed on the insurgents is more frightening than its mobility.

The Wild Dagger has two 12.5mm CIWS mounted in its head and they are usable only in MS Mode. CIWS is typically inadequate for dealing with mobile suit-grade armor, but is sufficient for destroying small targets such as missiles, ground vehicles, and other soft targets.

A characteristic weapon of the Wild Dagger, it is mounted in the Quadruped Mode's head and is usable only in this mode. The Gatling gun is mainly used against ground targets.

A beam saber is stored on each of the Wild Dagger's side skirt armor, and is handheld when used in MS Mode. In Quadruped Mode, the beam sabers can pivot outward to function in a similar manner to the Gaia Gundam's wing blades.

Mounted in the suit's tail, it is used to attack enemy targets when the suit is in Quadruped Mode and turns to have its rear facing them. The cannon's firing angle can be controlled by adjusting the Wild Dagger's four legs. The cannon remains functional while the suit is moving in Quadruped Mode, in this way, it can be used for attacking pursuing units while retreating.

The same ranged handheld weapon as the Dagger L, the beam it fires is not as strong as most beam rifles but it is capable of rapid fire, and its small size make it easier to wield. The beam carbine is mainly used in MS Mode.

The Wild Dagger can also use the same type of shield as the Dagger L to block enemies' attacks when in MS Mode. The shield is anti-beam coated and can block or deflect energy based attacks from beam weapons.

An alternative weapon that can be mounted on the Quadruped Mode's head. It seems to be mainly used by the MS Mode, whether the Quadruped Mode can use it or not is unknown. The beam boomerang is a throwing weapon that emits a short beam blade on one end, and can return to the owner after throwing, often catching enemy units by surprise.

Located on the suit's back, it is for mounting additional weaponry like missiles pods, beam cannons, etc.

On uneven terrain, the Earth Alliance forces often faced a tough battle against ZAFT forces due to the BuCUE and LaGOWE's superb mobility. Development of the Wild Dagger was thus started, but due to increasing development cost and the ceasefire between both parties, the project was shelved. The project was restarted in C.E.73 after the Earth Alliance analysed the captured Gaia Gundam's structure, and the Wild Dagger's design was changed from a four-legged form into its current transformable form. It was then put into limited production, and 70 units were produced in total for use in counter-insurgency operations, although the initial order was for 72 units. During the Battle of Heaven's Base, a Wild Dagger was part of a MS team deployed to protect the Nibelung anti-aircraft cannon from being discovered by ZAFT's reconnaissance team before it could be used. 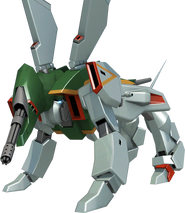 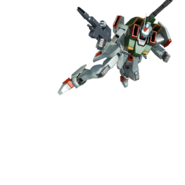