The GAT-X370 Raider Gundam is a transformable Mobile Suit featured in the series Mobile Suit Gundam SEED. It is piloted by "Biological CPU" Clotho Buer.

The Raider is a transformable mobile suit and the only second generation GAT-X machine to adopt the X300-series frame used by the GAT-X303 Aegis Gundam. Compared to the Aegis, Raider has improved anti-mobile suit capabilities when in MA mode and its transformation system is greatly simplified. It is actually a variant of the GAT-333 Raider Full Spec and maintains some of its predecessor's characteristics, like a MA mode specialized for flight and the two large fighter plane-like main wings that give it full atmospheric flight capabilities. These wings also boost Raider's turning capabilities and acceleration speed on earth and in space, as well as allow it to serve as a subflight lifter unit for carrying other mobile suits (usually the GAT-X131 Calamity Gundam). During battles, Raider often utilizes hit-and-run attacks and has Trans Phase Armor like the other second generation machines. The Raider is armed with both energy and shell-firing weapons (with some of them being usable only in flight mode) and uses the "Mjolnir" Spherical Breaker, a wire tethered mace, as its handheld weapon.

Usable only in MA mode, they are mounted in the middle portion of the claws and have a short firing range. They can also generate a short beam blade for close combat.

A shield with a built-in double barrelled cannon, it can be used in both MA and MS mode. It is mounted on the left shoulder when in MA mode and on the right forearm when in MS mode. The 52mm hyper velocity shield cannons have two firing modes, semi-auto and full-auto.

Two machine guns installed in the shoulders and are usable only in MA mode.

Mounted in the MA mode's nose and usable only in this mode. It is mainly used to restrict enemy's movements during dogfight, but also has sufficient power to damage non-PS armored unit.

An exceptionally dense spherical mace that can even damage enemy with Phase Shift armor. The mace also has a thruster to increase its speed and impact power, and is attached to a handheld holder via an anti-beam coated macromolecular cable. As a result, the "Mjolnir" can be spun rapidly on its long cable to form a makeshift shield effective at blocking both beam and projectile barrage. However, as the mace is not anti-beam coated, it can be cut in half by a beam saber. It is stored under the torso in MA mode.

A short range energy cannon mounted in the suit's mouth, it is usable in both MA and MS mode.

A new version of the PS armor, Trans Phase armored suits do not change color when the armor is activated. It is a two-layer armor system with the PS armor in the inner layer activating only when the outer armor is breached. This design thus helps to reduce energy consumption and allows the equipped suit to have a longer operational time as well as for more power to be reserved for the suits's weapon.

In mid CE 71, the EA collaborated with Muruta Azrael's Azrael Conglomerate to build three second-generation GAT-X mobile suits. These suits used more advanced technology based upon the old G Project mobile suits and were piloted by "Biological CPUs". One of these new suits was the GAT-X370 Raider Gundam. The Raider debuted during the Battle of Orb, alongside the GAT-X131 Calamity Gundam and GAT-X252 Forbidden Gundam, and the trio battled the ZGMF-X10A Freedom Gundam and ZGMF-X09A Justice Gundam to a standstill.

After the Battle of Orb, the Raider and its "Biological CPU", Clotho Buer, was sent to space and assigned to the Archangel-class assault ship Dominion under the supervision of Azrael. The Raider eventually took part in several important battles at the end of the First Alliance-PLANT War, surviving until the Second Battle of Jachin Due. There, it met its fate and was destroyed by Yzak Jule in the GAT-X102 Duel Gundam using the GAT-X103 Buster Gundam's hyper-impulse long-range sniper rifle. 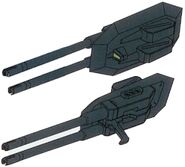 Firing one of the M2M3 76mm Machine Guns 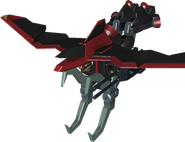 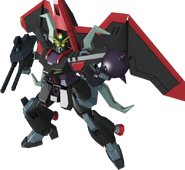 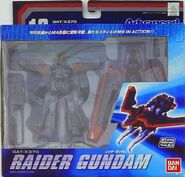 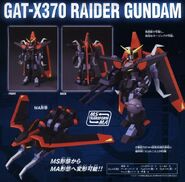