The GAT-X303 Aegis Gundam is a Mobile Suit introduced in the anime Mobile Suit Gundam SEED and is piloted by Athrun Zala.

Designated as the commander unit of the Alliance's G Project due to its enhanced communication and analysis capabilities, Aegis also has heavy attack power as well as Phase Shift armor and can transform into a mobile armor (MA) due to its X300-series frame. In MA mode, it has two different sub modes, 'Cruise' and 'Attack'. When in 'MA Cruise Mode', Aegis has higher speed and acceleration, while in 'MA Attack Mode', it can destroy enemy ship/mobile suit with its "Scylla" 580mm energy cannon directly or grab onto them with its four limbs first then destroy them using the cannon. Other weaponry includes two head-mounted CIWS, a hand-held beam rifle, a shield and a beam saber in each limb.

Aegis also has a large sensor unit at the top of its head and unlike most suits, its main thrusters seem to be located in the side binders on its waist. Due to the transformation system, Aegis's internal structure is more complex and it is for this reason that there are no mass production variants of the suit. The three different modes (MS Mode, MA Cruise Mode and MA Attack Mode) also means that Aegis's pilot needs to have higher skills to be able to use the suit effectively.

Mounted in the Aegis's head are two "Igelstellung" 75mm multi-barrel CIWS guns. Although classified as an anti-air weapon, these light projectile weapons can be used to intercept missiles and to destroy lightly armored vehicles.

Aegis can emit a total of four beam sabers from its forearms and feet. All four can be used simultaneously, in either mobile suit or mobile armor configuration.

A simple anti-beam coated shield that can be mounted on its left forearm or handheld. It is stored on the side binders when not in use and when the suit transform into its MA Attack/Cruise mode.

A powerful energy cannon that is usable only in Aegis's 'MA Attack Mode'. It is the largest caliber beam weapon to be mounted on a G Project mobile suit and likely to be the strongest, it has enough power to tear through the entire width of an Earth Alliance battle ship.

Aegis Gundam's main ranged weapon when in MS mode, it is hand-held when in used and can be stored on the side binders.

As with all of the G Project mobile suits, the GAT-X303 Aegis is equipped with phase shift armor. When activated the Aegis's color is changed from a light grey to a bright red scheme with a bit of black and white mixed in. Phase Shift armor, when activated, renders the Aegis immune to physical attacks such as bullets, the GINN sword, or against missiles. However Phase Shift armor continually drains the battery of energy, shortening the mobile suit's combat endurance, and uses up additional energy when it is hit.

One of the original five mobile suits created as part of the Atlantic Federation's G Project. The Aegis was rolled out on January 20, CE 71, together with the other suits produced in the project. Stored in the colony Heliopolis, it became the target of ZAFT and, together with all but one of the prototype mobile suits, was stolen by them on January 25.[1][2] Its pilot was Athrun Zala, who then used the suit for several months.

The Aegis was transported to Earth shortly after the Battle of Orbit on February 13 to pursue the Archangel.[3] It was held at the Carpentaria Base in Australia until the Archangel passed through the Indian Ocean, where it was sent to rendezvous with the Vosgulov-class submarine Cousteau. The Aegis, GAT-X102 Duel Gundam, GAT-X103 Buster Gundam and GAT-X207 Blitz Gundam successfully intercepted the Archangel in mid-ocean and forced the heavily damaged assault ship to lay over at Orb for repairs.[4]

Its final battle occurred in mid April, while fighting Kira Yamato in the GAT-X105+AQM/E-X01 Aile Strike Gundam‎ and Tolle Koenig in his FX-550 Skygrasper during the Battle of the Marshall Islands. There, Athrun destroyed the Skygrapser, killing Tolle, and fought a viscous battle with Kira. At the battle's climax, Athrun self-destructed the Aegis while grappling the Strike, destroying the Aegis and heavily damaging the Strike.[5] He ejected beforehand and was found injured on the shore by Cagalli Yula Athha.[6] Athrun returned to combat shortly after, piloting the ZGMF-X09A Justice Gundam.[7]

The fragments of the destroyed mobile suit eventually found their final, peaceful use as a playground for young children, on the same island where Athrun and Kira fought. Its shield was later found and sold at the black market auction for junk, which was listed by Lowe Guele and friends. The Aegis was used as the base unit for developing ZAFT's ZGMF-X11A Regenerate Gundam.

After the war, as part of the "Actaeon Project" MS development plan, another Aegis Gundam was manufactured and piloted by Phantom Pain pilot, Emilio Bloderick. The unit was later upgraded into the GAT-X303AA Rosso Aegis.

Appearing in the manga Mobile Suit Gundam SEED Re:, it is the Aegis Gundam equipped with new modules that allow it to transform into a MA mode that is usable in the atmosphere. Changes to the suit include: 1) the side binders are replaced with wing binders that mount a railgun each, 2) the suit can now fire its "Scylla" 580mm Multi-phase Energy Cannon when in MS mode, 3) the shield is modified with three beam saber emitters, and 4) it uses a larger, longer beam rifle as its primary handheld weapon, and in the new MA mode, this beam rifle is connected to the "Scylla" 580mm Multi-phase Energy Cannon. 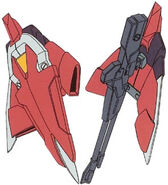 Beam Rifle and Shield stored on side binders

In the first opening (Original)

With Blitz Gundam in hangar (On a Calm Day, HD Remastered)

With other Gundams stolen by ZAFT (The Turning Point, HD Remastered)

Self destructing with Aile Strike Gundam in its grasp (Flashing Blades, Original)

Self destructing with Aile Strike Gundam in its grasp (Flashing Blades, HD Remastered)

Salvaged shield in an auction (Ep 1) 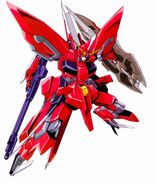 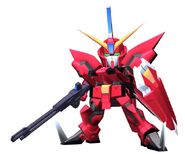 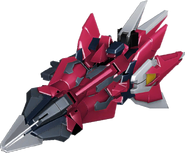 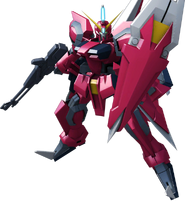 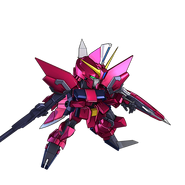 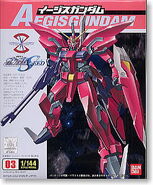 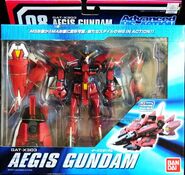 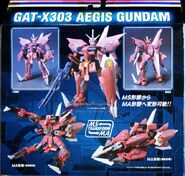 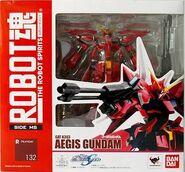 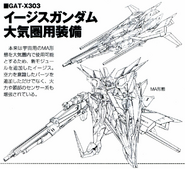