The Rosso Aegis is a modified GAT-X303 Aegis Gundam produced as part of the "Actaeon Project", a joint development between several companies led by Actaeon Industries and Phantom Pain. The GAT-X303AA Rosso Aegis ("AA" stands for "Advanced Acceleration") retains most of the original Aegis' weaponry, except the shield and the head vulcans, has Variable Phase Shift armor and a more complex transformation mechanism. Besides the "MS mode", "MA cruise mode" and "MA attack mode", it can also transform into 3 other modes. However, these additional modes resulted in the Rosso Aegis' internal structure to be more complex and is thus a source of concern. Additionally, the pilot also needs to have a higher level of skill to be able to use the different modes effectively. Although the suit is battery powered, Phantom Pain plans to convert it into a nuclear powered unit and has already set aside a space in the MS for doing so.

The major modifications to the suit is the replacement of the side binders with normal side armors, and the addition of a pair of back-mounted wing binders, which increases the mobility of its MA modes and allows Rosso Aegis to transform into its new "Flight mode". In this mode, the wing binders are positioned above the shoulder and mimic the Jet Striker equipment, allowing Rosso Aegis to fly in the atmosphere while in MS mode. Another new mode is the "Shooting mode", which allows Rosso Aegis to fire its "Scylla" multi-phase beam cannon while in MS mode by lifting up the front torso section, which cannot be done in the original Aegis. Furthermore, the Scylla's beam is bendable due to the magnetic field generators mounted in the wing binders, which can be positioned at the sides of the cannon. The last new transformation mode is the "Multi-leg mode", whereby the Rosso Aegis retains the use of the MS mode's upper body while having the mobility of a four-legged MA. In this mode, the legs are bent close to 90° while the wing binders are flipped upside down, with the top components morphing into an additional set of feet.

Rosso Aegis is equipped with 4 beam sabers that are mounted on the forearms and feet rather than hand-carried. All four can be wielded simultaneously, in either mobile suit or mobile armor configuration.

A handheld ranged beam weapon, it can be mounted or stored on the forearms.

A powerful multi-phase beam cannon that can be fired in either MA attack mode or in Shooting mode. The beam fired can be bend by the magnetic field generators mounted in the wing binders.

To make Rosso Aegis' "Scylla" multi-phase beam cannon more effective in battle, the wing binders are equipped with magnetic field generators and can be positioned next to the cannon. These devices generate a magnetic field between the binders that can alter the direction of the Scylla's beam, making it difficult for enemies to evade the attack and allowing the beam to hit unsuspecting enemy units. Similar equipment is mounted on the GAT-X252 Forbidden Gundam.

A new version of Phase Shift armor with greater energy efficiency. The voltage applied to the armor can be adjusted, and this changes the armor's strength and color to meet the needs of the mobile suit and its pilot.

During the First Alliance-PLANT War, the Earth Alliance collaborated with Orb's Morgenroete Inc. in creating their own series of mobile suits. One of the suit produced under this so-called G Project was the Aegis, which, together with three other suits, was stolen by ZAFT in CE 71. After the war, as part of the "Actaeon Project" MS development plan, another Aegis was re-manufactured and piloted by Phantom Pain pilot, Emilio Bloderick. The unit was later upgraded into the GAT-X303AA Rosso Aegis.

Dispatched against the Martian visitors in the Second Alliance-PLANT War, the Rosso Aegis and the GAT-X207SR Nero Blitz were defeating their opponent, until repeated provocation by the MMF-JG73L ∇ pilot Ergnes Brahe caused Emilio to go berserk. After the Rosso Aegis was damaged in battle, its wreckage was retrieved by the Junk Guild and examined. 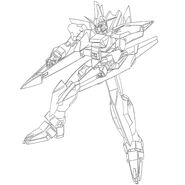 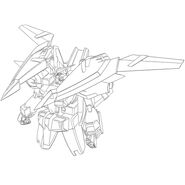 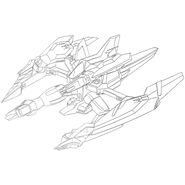 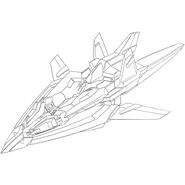