A second generation GAT-X machine, the Forbidden is designed for infiltrating and raiding enemy bases and to fulfil this role, it can transform into a "High-Speed Assault Form" by flipping its huge backpack unit over its head. Like the other two second generation units, the Forbidden is equipped with Trans Phase Armor (TP armor). Its armaments consists of head-mounted CIWS, forearm-mounted machine guns, a handheld scythe and backpack-mounted railguns and plasma cannon, both of which are usable only in "High-Speed Assault Form".

As indicated by its model code, the Forbidden utilizes a X200-series frame like the GAT-X207 Blitz Gundam, and as such it is also equipped with special equipment. One special equipment is the "Geschmeidig Panzer" energy deflection armor installed in its two massive shields. This equipment can deflect any range beam attacks that hits it, making the Forbidden virtually invulnerable to these attacks. Coupled with the fact that the shields themselves also have TP armor, the Forbidden is thus well protected from most beam and physical attacks. In addition, the "Geschmeidig Panzer" also allows the Forbidden to move underwater with ease, even though it is not specifically designed for aquatic use.

Another special equipment is the magnetic field generators installed on the railguns, they allow the bending of the plasma cannon's beam, making the attack harder to evade. Due to the powerful thrusters in the backpack, which is actually a specialized flight unit, the Forbidden can fly in the atmosphere and is one of the rare mobile suits to be capable of both aerial and aquatic combat without any additional equipment.

Two of these light projectile weapons are mounted in the Forbidden's head and although designated as Anti-Air, they can be used for missile interception and to destroy lightly armored vehicles.

Mounted on each forearm, they are mainly used to discourage enemy units from closing in or to restrict their movements in close combat.

A pair of them are mounted on the backpack and are usable only in "High-Speed Assault Form". They are the Forbidden's most powerful solid-based range weapon and can destroy most mobile suit in a single shot.

The Forbidden's only beam weapon but also its most powerful weapon, it is mounted on the backpack and usable only in "High-Speed Assault Form". The beam fired from the cannon can be bended via the magnetic field generated between the railguns.

The Forbidden's only handheld weapon, it can be used to slice and destroy small battleship/mobile units and even mobile suits. The sharp blade is made using a special process created by technicians who once lived in the Graveyard.

Mounted on the shields, this system utilizes colloid particles to repel and redirect energy beams away from the mobile suit. The particles used are different from those in Mirage Colloid stealth system, but both systems are similar as powerful magnetic fields are needed to hold the particles in place above the armor. This deflection system however seems to be ineffective against close combat beam weapons, as ZGMF-X09A Justice Gundam's beam boomerang is able to damage the shields' surface. This system is also used for moving through water and counteracting water pressure.

To make the Forbidden's only beam weapon- the "Hresvelgr" Plasma Induction Cannon- more effective in battle, the two "Eckzahn" railguns are equipped with magnetic field generators. These devices generate a magnetic field between the railguns that can alter the direction of the Hresvelgr's plasma beam, making it difficult for enemies to evade the attack and allowing the beam to hit unsuspecting enemy units.

A new version of the PS armor, Trans Phase armored suits do not change color when the armor is activated. It is a two-layer armor system with the PS armor in the inner layer activating only when the outer armor is breached. This design thus helps to reduce energy consumption and allows the equipped suit to have a longer operational time as well as for more power to be reserved for the suits's weapon.

In mid CE 71, the Earth Alliance collaborated with Muruta Azrael's Azrael Conglomerate to build three second-generation G Project mobile suits. These suits used more advanced technology based upon the old G Project mobile suits and were piloted by "Biological CPUs". One of these suits was the GAT-X252 Forbidden Gundam, whose pilot was the "Biological CPU", Shani Andras. The Forbidden debuted during the Battle of Orb, alongside the GAT-X131 Calamity Gundam and GAT-X370 Raider Gundam, and the trio battled the ZGMF-X10A Freedom Gundam and ZGMF-X09A Justice Gundam to a standstill.[1][2] After the battle, the trio was sent into space and assigned to the Archangel-class assault ship Dominion under the supervision of Azrael; one of the leaders of the anti-Coordinator terrorist group, Blue Cosmos.[3]

As the Forbidden's Geschmeidig Panzer system could also be used as an underwater propulsion system, the EA used the machine as a base to create underwater-use mobile suit, resulting in the GAT-X255 Forbidden Blue, which was also deployed during the war.

About to be hit by Freedom Gundam's Railguns at point-blank range (Athrun, HD Remastered)

High-Speed Assault Form, side (Into the Dawn Skies, HD Remastered)

Hovering over the water (Into the Dawn Skies, HD Remastered)

With Calamity Gundam and Raider Gundam (1) (Into the Dawn Skies, HD Remastered)

In hangar (What Stands in the Way, HD Remastered)

Vs. Justice Gundam (What Stands in the Way, HD Remastered)

Charging in High-Speed Assault Form with both shields in front (The Opening Door, HD Remastered)

Attacking Justice Gundam (A Place for the Soul, HD Remastered) 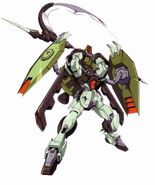 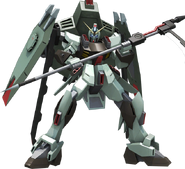 In In G Generation Crossrays 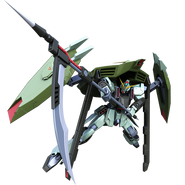 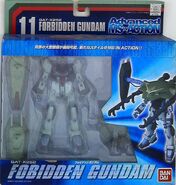