The GAT-X252R Rot Forbidden Gundam is a Mobile Suit appearing in the Mobile Suit Gundam SEED Destiny Astray R photonovel. It is a variant of the GAT-707E Forbidden Vortex.

The Rot Forbidden is developed under the Earth Alliance's "Actaeon Project", but it is actually an independent project by the Actaeon Industries. Created by Valerio Valeri, it is designed to have higher defensive capabilities than the other MS in the Forbidden Gundam lineage. It was originally supposed to have four "Geschmeidig Panzer" Energy Deflection Armor, but due to a series of problems including high energy consumption and difficulties in getting rare materials for their construction, this idea was dropped in favor of the installation of anti-beam particle dispensers. Some of the suit's weapons have also been improved and a pair of diffuse beam cannons are added to the backpack. The Rot Forbidden also has additional thrusters in the legs,and retains the ability to transform into the "High-Speed Assault Form". Although it is based on the mass produced GAT-707E Forbidden Vortex, it has no problem operating in space. The Rot Forbidden is meant to be used alongside the GAT-X131B Blau Calamity Gundam and GAT-X370G Gelb Raider Gundam, where it functions as the team's vanguard and defense specialist. The suit is later upgraded with the Trio System, which improves its cooperation with the other two suits during battle, as well as the combat AI, 80. The installation of 80 greatly improves the suit's performance and turns it into an AI controlled MS.

Two of these light projectile weapons are mounted in the Rot Forbidden's head and although designated as Anti-Air, they can be used for missile interception and to destroy lightly armored vehicles.

Mounted on each forearm, they are mainly used to discourage enemy units from closing in or to restrict their movements in close combat. The body of the machine gun is enlarged so as to increase its ammunition capacity.

A pair of them are mounted on the backpack and are usable only in "High-Speed Assault Form". They are the Rot Forbidden's most powerful solid-based range weapon and can destroy most MS in a single shot.

Enlarged version of the plasma induction cannon used by the original Forbidden, it is mounted on the backpack and usable only in "High-Speed Assault Form".

A pair of diffuse beam cannons are mounted on the backpack, on either side of the plasma induction cannon. They are usable only in "High-Speed Assault Form".

Mounted on the shields, it is a system that utilizes colloid particles to repel and redirect energy beams away from the mobile suit. The particles used are different from those in Mirage Colloid stealth system, but both systems are similar as powerful magnetic fields are needed to hold the particles in place above the armor. This deflection system however seems to be ineffective against close combat beam weapons, as ZGMF-X09A Justice Gundam's beam boomerang is able to damage the original Forbidden's shields' surface. This system is also used for moving through water and counteracting water pressure.

The dispensers release special anti-beam particles, which are also used by warships, to repel energy beams away from the mobile suit, providing a wider area of protection against beam attacks. Due to the particles' synergistic effect with the Geschmeidig Panzer, the latter's effectiveness is also improved.

To make Rot Forbidden's "Hresvelgr" Plasma Induction Cannon more effective in battle, the two "Eckzahn" railguns are also equipped with beam arching devices. These devices generate an magnetic field that can alter the direction of the Hresvelgr's plasma beam, making it difficult for enemies to evade the attack and allowing the beam to hit unsuspecting enemy units.

A system that allows for better coordination of attacks between the Blau Calamity, Gelb Raider and Rot Forbidden. This system is actually a copy of ZGMF-X56S/ι Destiny Impulse Gundam R's Buddy System.

A combat AI based on 8 and the AI that Valerio Valeri is working on. Unlike the AI system installed in other MS, 80 is capable of controlling a MS by itself, but it can also serve as a support system if the pilot is present in the cockpit.

The last of the enhanced second generation GAT-X machines created by Valerio Valeri under the "Actaeon Project", the Rot Forbidden was first deployed alongside GAT-X131B Blau Calamity Gundam and GAT-X370G Gelb Raider Gundam in an ambush aimed at destroying the ZGMF-X56S/ι Destiny Impulse Gundam R and DI Adaga. The battle was a stalemate initially despite the three suits having the Trio System, but they soon managed to forced the self-destruction of the DI Adaga. However, DI Adaga's Destiny R Silhouette ejects beforehand and then escapes with the Destiny Impulse R.

After the combat AI, 80, was successfully developed, Valerio Valeri immediately installed it on the three enhanced second generation GAT-X machines. The trio of AI controlled suit was then used to defend against a large scale attack from Destiny Impulse R and numerous DI Adagas. The three suits were later destroyed on earth a week later by the MBF-P02 Gundam Astray Red Dragon in a duel between Valerio Valeri and Lowe Guele. 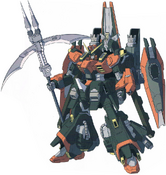 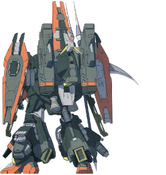