A copy of the original Blitz Gundam, the Blitz Gundam (Lily Thevalley Custom) is however armored with the latest Variable Phase Shift Armor instead of the Phase Shift Armor. The suit's unique color patterns are achieved through customizing the VPS Armor's voltage. The other aspects of the Gundam is no different from that of the original Blitz and similarly, its VPS armor cannot function while the Mirage Colloid stealth system is active.

Mounted on the left forearm, the "Gleipnir" is a rocket-propelled grappling claw which can be fired to pierce or grab an enemy unit and then retrieved on a line. A similar weapon is mounted on the GAT-X105+AQM/E-X02 Sword Strike in the form of the "Panzer Eisen" rocket anchor.

Mounted on the right arm, the "Trikeros" serve as the main weapon and shield of the Blitz and includes several weaponries. It allows the suit to switch between offense and defense quickly, as well as give it fast access to range and melee weapons. The negative aspect of this is that losing it will deprive Blitz of most of its weapons. The shield is anti-beam coated for defense against beam weapons.

For ranged combat, the Trikeros mounts a high-energy beam rifle.

The Blitz has three lancer darts that can be fired or be used for close combat. These rocket-propelled shafts can penetrate armor and detonate after impact. It can also be used as a handheld spear in combat.

Mounted on the Trikeros, it is the Blitz's primary close combat weapon of choice.

In this system, a powerful magnetic field is utilized to hold in place microscopic prisms capable of blocking infra-red emission as well as bend visible light and radio waves around an object (e.g.a mobile suit). However due to the system's high energy consumption, it could only be activated for up to 80 minutes. Also, since Variable Phase Shift armor is disabled while Mirage Colloid is active, the Blitz is highly vulnerable in its cloaked state if an enemy is able to locate its position.

The latest version of Phase Shift armor, it is more energy efficient and its strength, as well as color can be changed in the field, although this must be programmed beforehand. 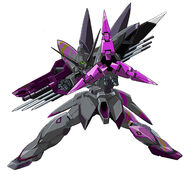 Retrieved from "https://gundam.fandom.com/wiki/GAT-X207_Blitz_Gundam_(Lily_Thevalley_Custom)?oldid=441379"
Community content is available under CC-BY-SA unless otherwise noted.