The GAT-X207 Blitz Gundam is a Mobile Suit featured in Mobile Suit Gundam SEED and piloted by Nicol Amalfi.

The GAT-X207 Blitz Gundam is developed for the purpose of conducting surprise attacks deep behind enemy lines. It is the only unit among the five prototypes created under the Alliance's G Project to use the X200 series frame that is designed to support special systems. In this case, the Mirage Colloid Stealth System that renders Blitz invisible to both sensors and the naked eye. The suit is painted mainly black to enhance the effectiveness of the stealth system and is fitted with other systems to ensure the silent operation of internal mechanisms and systems, as well as to control the heat dissipation while cloaked. Like the other four units, Blitz is also equipped with Phase Shift armor system, but unlike them, it does not have any built-in weaponry like the CIWS. Its armament are all arm-mounted and consists of a grappling claw and an offensive shield system, which mounts both melee and range, beam as well as non-beam weapons.

Mounted on the left forearm, the "Gleipnir" is a rocket-propelled grappling claw which can be fired to pierce or grab an enemy unit and then retrieved on a line. A similar weapon is mounted on the GAT-X105+AQM/E-X02 Sword Strike Gundam in the form of the "Panzer Eisen" rocket anchor.

Mounted on the right arm, the "Trikeros" serve as the main weapon and shield of the Blitz and includes several weapons. It allows the suit to switch between offense and defense quickly, as well as give it fast access to the range and melee weapons. The negative aspect of this is that losing it will deprive Blitz of most of its weapons. The shield has Phase Shift armor[1], and is anti-beam coated for defense against beam weapons.

For ranged combat, the Trikeros mounts a high-energy beam rifle.

The Blitz has three lancer darts that can be fired or be used for close combat. These rocket-propelled shafts can penetrate armor and detonate after impact. It can also be used as a handheld spear in combat.

Mounted on the Trikeros, it is the Blitz's primary close combat weapon of choice.

The Blitz is the first mobile weapon to use the Mirage Colloid Stealth System. In this system, a powerful magnetic field is utilized to hold in place microscopic prisms capable of blocking infra-red emission as well as bend visible light and radio waves around an object (e.g.a mobile suit). However due to the system's high energy consumption, it could only be activated for up to 80 minutes. Also, since Phase Shift armor is disabled while Mirage Colloid is active, the Blitz is highly vulnerable in its cloaked state if an enemy is able to locate its position.

As with all of the G Project mobile suits, the GAT-X207 Blitz is equipped with Phase Shift armor. When activated, the Blitz's color is changed from a light gray to a bright black scheme with red highlights. Phase Shift armor, when activated, renders the Blitz immune to physical attacks such as bullets, the GINN sword, or against missiles. However Phase Shift armor continually drains the battery of energy, shortening the mobile suit's combat endurance, and uses up additional energy when it is hit.

The Blitz Gundam is one of five mobile suits created by the Earth Alliance under its G Project during the First Alliance-PLANT War. Together with the other four units, it was stored secretly in the Orb Union controlled space colony Heliopolis.

On January 25, C.E. 71, the Blitz, along with three other mobile suits of the project, the GAT-X102 Duel Gundam, the GAT-X103 Buster Gundam, and the GAT-X303 Aegis Gundam were stolen by ZAFT, with Nicol Amalfi becoming its designated pilot.[2] Together with his comrades, Nicol used his suit to pursue the Archangel so as to capture the last G Project machine, the GAT-X105 Strike Gundam. During the Archangel's stay in the Eurasian Federation-controlled Artemis asteroid, Nicol used the Blitz's Mirage Colloid system to infiltrate the asteroid base, successfully bypassing the "Umbrella of Artemis" and severely damaging the facility.[3] The Blitz later participated in the Battle of Orbit against the Earth Alliance's 8th space fleet with the other three stolen Gundams, destroying several TS-MA2 Moebius units and a Nelson-class battleship.[4]

In March, the Blitz was sent to Earth with the Aegis and assigned to the Zala Team. The team then launched an attack on the Archangel in the Third Equatorial Skirmish, where the Blitz was knocked off its Guul sub-flight lifter by the GAT-X105+AQM/E-X01 Aile Strike Gundam.[5] In mid April, the Blitz lost its right arm in combat with the GAT-X105+AQM/E-X02 Sword Strike Gundam during the Battle near Orb. Despite the damage, Nicol still had it charged towards the Sword Strike to protect the Aegis, piloted by his friend Athrun Zala. However, it ended up running into the Sword Strike's anti-ship sword, killing Nicol, with the Blitz exploding soon after.[6]

Orb subsequently recovered the severed right arm of the Blitz, and used it in the construction of the MBF-P01-ReAMATU Gundam Astray Gold Frame Amatsu, giving it use of the Mirage Colloid system, in addition to the Trikeros Offensive Shield System. After the war, as part of the "Actaeon Project" MS development plan, another Blitz Gundam was re-manufactured and piloted by Phantom Pain pilot, Dana Snip. This unit was later modified into the GAT-X207SR Nero Blitz Gundam.

Appearing in the manga, "Mobile Suit Gundam SEED Re:", it is the Blitz Gundam equipped with an atmospheric flight pack similar to the one used by GAT-X102 Duel Gundam (Atmospheric Equipment). Although the Blitz's flight pack also uses parts from AMF-101 DINN, but unlike the Duel's, it is armed with special sub-wings that can transformation into a large claw. The large claw, like the Gundam Astray Gold Frame Amatsu's "Maga no Ikutachi", can drain energy from the battery of enemy mobile suit caught in its grip via the use of Mirage Colloid technology.

In hangar with Aegis Gundam (On a Calm Day, HD Remastered)

Charging with a Trikeros' Lancer Dart in hand (The Turning Point, Original)

Attacking with a Trikeros' Lancer Dart in hand (The Turning Point, Original)

Moments before being struck by the Sword Strike's Anti-Ship Sword (The Turning Point, Original)

Moments before being struck by the Sword Strike attempting to moves away its Anti-Ship Sword (The Turning Point, HD Remastered)

Blitz Gundam (Atmospheric Equipment) (center) with the other stolen Gundams in Mobile Suit Gundam SEED Re: 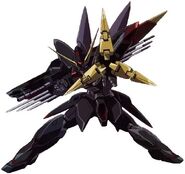 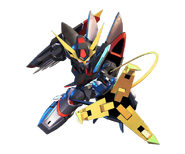 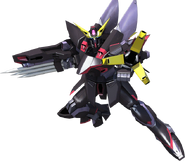 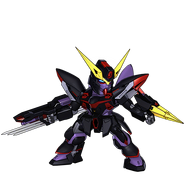 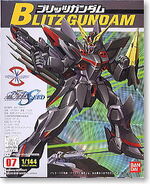 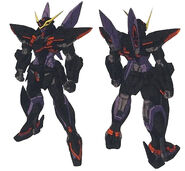 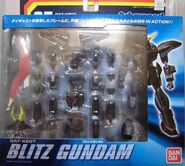 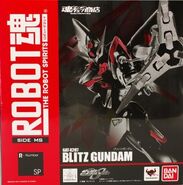