The GAT-X133 Sword Calamity is a prototype close-quarters combat mobile suit and was first featured in the original design series SEED-MSV. It is piloted by Rena Imelia, Edward Harrelson and Four Socius.

While the original GAT-X131 Calamity Gundam is an artillery mobile suit, the Sword Calamity is primarily designed for close combat with armament derived from the GAT-X105+AQM/E-X02 Sword Strike Gundam. Its main weapon is a pair of large anti-ship swords similar to that used by Sword Strike, and they also function as laser guns. Other close combat weaponry includes pairs of beam boomerangs, rocket anchors, and combat knives. Sword Calamity retains the energy cannon of the original Calamity, but its power is reduced in exchange for a longer operational time. In addition, the mobile suit's fire control system and electronics have been modified to fit its new role as a close combat unit.

Three Sword Calamity units are produced in total. Unlike the Sword Calamity Unit 2 and Unit 3, Unit 1 retains the Calamity Gundam's original color on its unmodified parts. This occurs as Unit 1 was designed to gather data for other Calamity Gundam-based variations as part of the 'Rebuild 1416 Program' and hence was not repainted. However, the program was later dropped as Earth Alliance switched to the GAT-01A1 Dagger as the base machine for their multi-purpose MS.

A close combat weapon stored on the suit's legs, they are simply enlarged knives and mainly serve as backup weapons.

A set of two "Midas Messer" beam boomerangs derived from Sword Strike's is mounted on the Sword Calamity, with each shoulder storing one. It is a throwing weapon with a small beam blade that can return to the owner, often catching enemy units by surprise.

Sword Calamity is also equipped with two forearm-mounted "Panzer Eisen" rocket anchors, which are of a similar type as the one on the Sword Strike Gundam. They are grappling claws that are shot out on a line to hit or grab an enemy unit.

The other ranged energy weapon installed on the Sword Calamity (besides the laser guns on the anti-ship swords) is the chest-mounted "Scylla" 580mm multi-phase energy cannon. It is the same weapon as the one on the original Calamity, but its maximum output is only 30% of the original. This allows more energy to be used for powering the suit, extending its operational time.

Built as a close-combat variant of the GAT-X131 Calamity, the Sword Calamity was piloted by Naturals and Combat Coordinator, instead of "Biological CPUs". Sword Calamity was completed at around the same time period as the original Calamity and 3 units were produced in total. The first unit was created mainly to gather data and was put into storage after that. The other 2 units were deployed in combat after numerous tests and were piloted by Earth Alliance aces Edward Harrelson and Four Socius. During the Third Battle of Victoria, these 2 units were under the command of Rondo Gina Sahaku and played an important role in the EA victory over ZAFT.

Four Socius and his Sword Calamity were eventually given to Orb's Rondo Sahaku faction by Muruta Azrael, and later attaced the Kusanagi to kill Cagalli Yula Athha on Gina's orders, but the plan was thwarted by Gai Murakumo. Edward's unit took part in the Second Battle of Jachin Due and during the battle, Ed was convinced that he should rebel against the Alliance. After the war, Ed defected to the United States of South America, and the first Sword Calamity was taken out of storage and assigned to Earth Alliance ace, Rena Imelia, who was sent after him. Ed defeated Rena in combat, but both pilots were injured. The damaged Sword Calamitys were salvaged by Kaite Madigan and added to his MS collection, however, he promised Jess Rabble that he would give Ed's unit back to him if he ever needed it again.

Holding the pair of Anti-ship Swords together 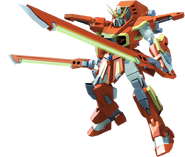 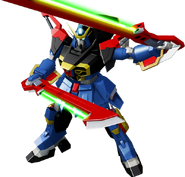