The GAT-X131 Calamity Gundam is a Mobile Suit introduced in the anime series Mobile Suit Gundam SEED and is piloted by "Biological CPU" Orga Sabnak.

One of three second-generation GAT-X machines, Calamity is built on the X100-series frame and inherits GAT-X103 Buster Gundam's artillery attack concept. It can also be used to provide support from the rear and is armed with several powerful range weapons, but it completely lacks any close combat weaponry. Its armament consisted of two back-mounted high-energy long-range beam cannons, a chest-mounted multi-phase energy cannon, 2-barrel ram cannon equipped shield attached to the left arm and a hand-carried plasma-sabot bazooka.

Due to its Trans Phase Armor, a new and energy-efficient form of the Phase Shift armor, Calamity has a longer operational time than the first generation GAT-X machines and also has more energy for its power-hungry beam weapons. With the powerful thrusters installed around the body, it can hover over deserts or bodies of water easily. However, as it lacks true flight capability within the atmosphere, it often has to ride on top of GAT-X370 Raider Gundam when the latter is in MA mode to keep up with its flight-capable sister units when moving to the combat zone. In this configuration, Calamity uses Raider much like ZAFT suits use the Guul subflight lifter. The control system of the Calamity is very complex and its customized OS can only be used by the "Biological CPU".

A hand-carried, shell-based weaponry. It has a high rate of fire and causes serious damage and shock around the impact area.

A pair of backpack-mounted beam cannons that rise up over the shoulders. They have an excellent rate of fire and destructive power and are capable of easily destroying an enemy force from range.

A high powered energy cannon mounted in the upper torso of the Calamity. Based upon the same cannon incorporated into the GAT-X303 Aegis, it can deal serious destruction to anything in its path. It can also be used to discourage enemy units from closing in and is often used in conjunction with Calamity's other weapons for a pure destructive barrage.

Attached to the left forearm and/or handheld, the shield is made out of materials derived from the outer armor of spaceships like the Laurasia-class. As a result, it is light yet super hard. In addition, its surface has been given anti-beam treatment and the sharp tip can be used as a weapon during close combat.

A pair of beam cannons mounted on the shield, they have an excellent rate of fire.

A new version of the PS armor, Trans Phase armored suits do not change color when the armor is activated. It is a two-layer armor system with the PS armor in the inner layer activating only when the outer armor is breached. This design thus helps to reduce energy consumption and allows the equipped suit to have a longer operational time as well as for more power to be reserved for the suits' weapon.

In mid CE 71, the Earth Alliance collaborated with Muruta Azrael's Azrael Conglomerate to build three second-generation GAT-X mobile suits. One of these was the GAT-X131 Calamity Gundam, whose pilot was the "Biological CPU" Orga Sabnak. The Calamity was first used in the conquest of neutral Orb Union. During the Battle of Orb, the Calamity Gundam destroyed many battleships and MBF-M1 M1 Astrays. It also briefly engaged the GAT-X105+AQM/E-X01 Aile Strike Gundam (the GAT-X105+AQM/E-YM1 Perfect Strike Gundam in the HD remaster), before turning its sight to the ZGMF-X10A Freedom Gundam.

Working together with GAT-X370 Raider Gundam and GAT-X252 Forbidden Gundam, the trio nearly overwhelmed the Freedom before being interrupted by the ZGMF-X09A Justice Gundam. The trio fought the Freedom and Justice to a standstill, until their Biological CPUs began fighting amongst themselves, and they were eventually forced to retreat when the effects of the medication they were taking wore off. Once given their medication and their machines resupplied, the trio sortied again the next day. They faced off against the Freedom and Justice again, but withdrew once they were low on power. On the final day of the battle, they trio tried but failed to stop the Izumo-class battleship Kusanagi, Freedom, and Justice from escaping into space.

Subsequently, the trio were sent to space and assigned to the Archangel-class assault ship Dominion, and engage in battle with the Three Ships Alliance. During the Battle of Mendel, the Calamity was ordered to retrieve an escape pod carrying Flay Allster, who had with her data for the Neutron Jammer Canceller. Afterwards, the Calamity took part in the Battle of Boaz, where it shot down many ZAFT machines including the new ZGMF-600 GuAIZ. During the Second Battle of Jachin Due, the final battle of the war, the Calamity was finally destroyed by the METEOR equipped Justice Gundam. A close combat variant of the Calamity, known as the GAT-X133 Sword Calamity, was also created and deployed in the war. 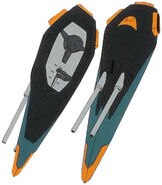 With Forbidden and Raider (2) (Into the Dawn Skies, HD Remastered)

Rear (What Stands in the Way, HD Remastered)

In hangar, with close up on "Scylla" 580mm Multi-phase Energy Cannon (What Stands in the Way, HD Remastered)

Holding Flay's lifepod (A Place for the Soul, HD Remastered) 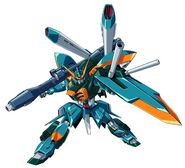 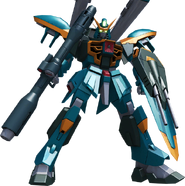 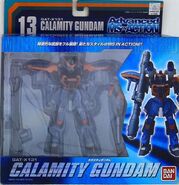 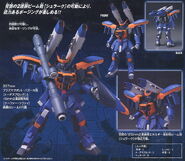