Like the GAT-X105+AQM/E-X02 Sword Strike Gundam, the Another Trial Sword Strike E is a close combat mobile suit, however it is superior in terms of offensive capabilities, power efficiency and operating time. It is the GAT-X105E Strike Gundam E equipped with the Another Trial Sword Striker, which is an improved version of the Sword Strike's Sword Striker Pack. This new striker pack has an additional rocket anchor and beam boomerang, with the latter now mounted on the former instead of the shoulder. The change in the beam boomerang placement is because the Strike E has additional thrusters on the shoulder, and is thus unable to mount the original Sword Striker's shoulder part. When equipped with this striker pack, some of Strike E's VPS armor turns pale blue.

While most mobile suits feature a single handheld beam rifle, the Sword Strike E instead is equipped with two small M8F-SB1 "Shorty" beam rifle. Despite their small size and a 15% decrease in effective combat range compared to standard rifles, these are powerful enough to destroy an enemy unit with a single shot. When not in use, they are mounted on the side skirt armor, where the combat knives were stored on the original Strike.

A "Panzer Eisen" rocket anchor is mounted on each of the Sword Strike E's forearm. The front portion is a rocket-propelled anchor that is shot out on a reinforced polymer cable. The anchor's claw can open and close to capture or destroy the target. The cable's reel case is installed behind the front portion, and the entire weapon can function as a shield with anti-beam coating. Sword Strike E's "Panzer Eisen" has been modified to be able to mount the "Midas Messer" beam boomerang.

Sword Strike E is equipped with two beam boomerangs that are mounted on modified "Panzer Eisen" rocket anchors. The beam boomerang is a throwing weapon that emits a short beam blade on one end, and can return to the owner after throwing, often catching enemy units by surprise. It is equipped with a system similar to the beam saber, and the generated beam blade does not dissipate when it leaves the mobile suit's hand due to the in-built large-capacity power condenser.

The "Schwert Gewehr" 15.78m anti-ship sword is the Sword Strike E's largest and primary weapon. It is a large physical sword that has a laser blade along the cutting edge. The large blade is designed to easily slice mobile suits in half or to cut off sections of a ship such as the guns. It is stored on the right side of the backpack when not in use.

After their defeat at the end of Mobile Suit Gundam SEED C.E. 73 Δ Astray, Phantom Pain pilots Dana Snip and Emilio Bloderick were captured by Jess Rabble and his friends. Dana and Emilio subsequently led them to a secret research lab, where they managed to escape captivity and took control of two Strike E units stored within the lab, using them to launch an attack. However during the battle, Emilio had a change of heart; he attacked and destroyed Dana's Launcher Strike E using his Sword Strike E, saving Jess and friends. 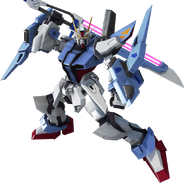 Retrieved from "https://gundam.fandom.com/wiki/GAT-X105E_Another_Trial_Sword_Strike_E?oldid=502695"
Community content is available under CC-BY-SA unless otherwise noted.