Installed in the head of the Launcher Strike E are two 12.5 Automatic CIWS (Close-In Weapon System) vulcans. While not very effective at damaging the armor of a MS, they serve as point-defense weapons for destroying incoming missiles, enemy aircraft/fighters and other light-armored targets or to deter enemy MS from closing in.

While most mobile suits feature a single handheld beam rifle, the Launcher Strike E instead is equipped with two small M8F-SB1 "Shorty" beam rifle. Despite their small size and a 15% decrease in effective combat range compared to standard rifles, these are powerful enough to destroy an enemy unit with a single shot. When not in use, they are mounted on the side skirt armor, where the combat knives were stored on the original Strike.

The primary weapon of the Launcher Strike E, this large beam cannon has a total length of about 20m. It generates highly-compressed critical plasma energy in the order of microsecond burst impulses and fires them, easily destroying a mobile suit in one shot and blasting a hole through a space colony's wall. It is mounted on the left side of the backpack on an arm unit, and held under the left shoulder when in use.

The secondary weapons of the Launcher Strike E, it is a close range, defensive, composite armament unit consisting of a 120mm anti-ship vulcan gun and two 350mm gun launchers. It is mounted on the right side of the backpack and can lock onto multiple targets simultaneously. The 120mm anti-ship vulcan gun is effective in intercepting MS at close-mid range and can also be used for anti-ship combat. As for the 350mm gun launchers, they are missile launchers, but can also fire a variety of projectiles including grenades.

One EQS1358 rocket anchor is mounted in each hand and foot, for a total of four rocket anchors. These anchors can be used for various purposes, such as for maneuvering or to grapple a unit and throw it over a short distance. The attached cable is coated with a special polymer that allows the pilot to adjust the physical properties (thickness, strength, etc.) of the cable upon firing.

After their defeat at the end of Mobile Suit Gundam SEED C.E. 73 Δ Astray, Phantom Pain pilots Dana Snip and Emilio Bloderick were captured by Jess Rabble and his friends. Dana and Emilio subsequently led them to a secret research lab, where they managed to escape and took control of two Strike E units stored within the lab, using them to launch an attack. However during the battle, Emilio had a change of heart; he attacked and destroyed Dana's Launcher Strike E using his Sword Strike E, saving Jess and friends. 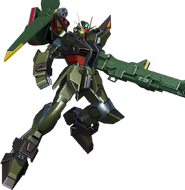 Retrieved from "https://gundam.fandom.com/wiki/GAT-X105E_Another_Trial_Launcher_Strike_E?oldid=457271"
Community content is available under CC-BY-SA unless otherwise noted.