The GAT-X105E+AQME-X09S Strike Noir Gundam is a Mobile Suit introduced in the Mobile Suit Gundam SEED C.E. 73: STARGAZER OVA. It is piloted by Sven Cal Bayang.

The GAT-X105E+AQM/E-X09S Strike Noir Gundam is the GAT-X105E Strike Gundam E equipped with the newly developed Striker Pack, the Noir Striker, which like the base MS itself, is part of the "Actaeon Project". The Noir Striker is developed based on Phantom Pain member Sven Cal Bayang's usage of the GAT-X105+P202QX Strike Gundam IWSP, and is hence considered the successor to the IWSP. Unlike the original IWSP, the Noir Striker is specialized for close combat and as a result, the Strike Noir has to work in coordination with the GAT-X1022 Blu Duel Gundam and GAT-X103AP Verde Buster Gundam in group tactics to maximize combat efficiency.[1]

The Noir Striker is a flight pack equipped with two MAU-M3E42 Twin Linear Guns, two MR-Q10 "Fragarach 3" Beam Blades, and an EQS1358T Rocket Anchor (similar to those on the Strike E itself), and has VPS armor. The VPS armor makes the Noir Striker hard to mass-produce and furthermore, like the IWSP, it can only be mastered by those with high piloting skills and therefore, there are no records of it being used by regular forces. Due to the Strike E's power extender, the Strike Noir has longer operational and flight time.[2] When equipped with the Noir Striker, the Strike E's VPS armor changes color, with the shoulder, head, wrist, ankle and skirt color changing to black and the white armor pieces changing to a dull gray.

While most mobile suits feature a single handheld beam rifle, the Strike Noir is instead equipped with two small M8F-SB1 "Shorty" Beam Rifles. Despite their small size and a 15% decrease in effective combat range compared to standard rifles, these are powerful enough to destroy an enemy unit with a single shot. When not in use, they are mounted on the side skirt armor, where the combat knives were stored on the original Strike.

Developed from the ZGMF-X88S Gaia Gundam's MR-Q17X "Griffon 2" Beam Blade, it is a physical sword with a beam edge. While not as big as a normal Anti-Ship Sword, it can still do massive damage to the target. The design of this weapon takes into consideration the handling in anti-MS combat. A pair of "Fragarach 3" beam blades are stored on the wings when not in use.

Developed based on the reliable and cost-effective MAU-M3 Twin Linear Guns fielded by the TS-MA4F Exus, the MAU-M3E42 model is configured for close combat, it has rapid-fire capability and consumes less energy. Strike Noir is equipped with a pair of twin linear guns mounted on the wings and they can swivel in various directions for a wide range of fire.

The same portable firearm as used by the GAT-X102 Duel Gundam. It can easily destroy most mass-production type MS with one shot, but is mostly ineffective against armor that has anti-beam coating. The beam rifle is also integrated with a 175mm grenade launcher under its barrel for additional firepower. Strike Noir has been shown to carry a pair of them for certain missions.

Because of its origin as a Strike E, the Strike Noir can mount Striker Packs. This ability was demonstrated in Mobile Suit Gundam SEED C.E. 73 Δ Astray, when the Strike Noir was heavily damaged by the GSF-YAM01 Δ Astray and had to equip an IWSP pack used by a GAT-01A2R+AQM/E-M1 105 Slaughter Dagger IWSP.

A large-capacity power pack added to the power supply system. This device improves a mobile suit's energy storage capacity, allowing the Strike Noir to use its VPS armor for a longer duration.

A rocket-propelled anchor of the model EQS1358 is mounted in each hand, and in the front and back of each sole, for a total of six. These anchors can be used for various purposes, such as for maneuvering or to grapple a unit and throw it over a short distance. The attached cable is coated with a special polymer that allows the pilot to adjust the physical properties (thickness, strength, etc.) of the cable upon firing. A variant of this, the EQS1358T, is mounted in the Noir Striker.

After the First Alliance-PLANT War, as part of the "Actaeon Project" MS development plan, at least one other GAT-X105 Strike Gundam was re-manufactured. The unit was assigned to Phantom Pain pilot, Sven Cal Bayang, and subsequently upgraded into the more powerful and advanced Strike E. Sven's Strike E was typically equipped with the Noir Striker and often work in a team consisting of Mudie Holcroft and her GAT-X1022 Blu Duel Gundam, as well as Shams Couza and his GAT-X103AP Verde Buster Gundam.

The Strike Noir's first deployment in the anime, along with the Blu Duel and Verde Buster, was to defend an Alliance base against Patrick Zala loyalist guerillas who emerged in the wake of the "Break the World" terrorist attack. Sven and his Strike Noir subsequently supervised a squad of GAT-01A2R 105 Slaughter Daggers as they destroyed a Coordinator refugee camp where some of the terrorists were allegedly trained.

Later in CE 73, Sven in the Strike Noir engaged in a brief duel with Martian Coordinator Ergnes Brahe in the GSF-YAM01 Δ Astray, who later escaped in his ship, the Acidalium. Shortly afterward, when Orb joined a treaty with the Earth Alliance, Sven was assigned to lead a squad of five Slaughter Daggers piloted by Orb soldiers in pursuit of the Acidalium. During the battle, Strike Noir's striker pack was damaged by Δ Astray and Sven changed over to the IWSP pack (which was being used by one of the Orb pilots) to continue the fight. He then defeated Δ Astray using the GAT-X105E+AQM/E-M1 Strike Gundam E IWSP.

Sven and his Strike Noir later returned to his Phantom Pain squad and escorted the Bonaparte as it delivered the GFAS-X1 Destroy Gundam to Neo Roanoke's unit. They were attacked along the way, and while Blu Duel was defeated with its pilot killed, the attacking ZAFT force was wiped out and the Bonaparte arrived at its destination.

Later, the remainder of Sven's squad was assigned to attack the Deep Space Survey and Development Organization's (DSSD) space station, to capture the GSX-401FW Stargazer Gundam's AI unit. During the battle, Sven was caught off guard by Stargazer's unorthodox capabilities, and Strike Noir's left arm was sliced off, along with other less significant damages. Stargazer's pilot Selene McGriff then grabbed the Strike Noir and used the DSSD station's propulsion laser to launch both mobile suits away from the battlefield. They were carried all the way to Venus, where Selene rescued Sven and transferred Strike Noir's remaining power to the Stargazer. The heavily damaged Strike Noir was abandoned as Stargazer returned to Earth. 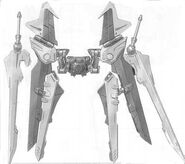 Flying with a pair of 57mm High-Energy Beam Rifles

Close up of damaged head 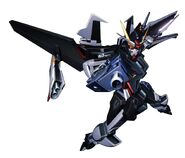 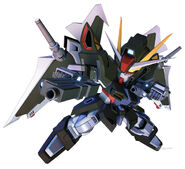 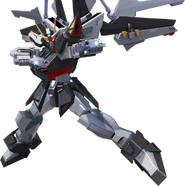