The Strike Gundam E IWSP is a Mobile Suit in the Cosmic Era timeline. It is piloted by Sven Cal Bayang and Lukas O'Donnell.

The IWSP pack combines the primary characteristics of the Aile, Sword and Launcher Striker Packs, allowing the equipped suit to handle various situations with only one set of equipment. As such it is very heavy, very powerful, very energy intensive and difficult to use. The pack also grants mobile suit the ability to fly within the atmosphere and was originally completed by Orb's Morgenroete Inc. during the last days of the first war with the model number, P202QX. AQM/E-M1 is a new model of IWSP developed by Actaeon Industries after the war, it is functionally identical to the P202QX. When using the IWSP pack, the Strike E can also be equipped with either Strike or Duel Gundam's beam rifle as its optional handheld weapon.

Strike E is equipped with two small M8F-SB1 "Shorty" beam rifle that are mounted on the side armor when not in use. Despite their small size and a 15% decrease in effective combat range compared to standard rifles, these are powerful enough to destroy an enemy unit with a single shot.

A pair of 115mm railguns is mounted on the IWSP pack, above the 105mm cannons. Railguns are powerful weapons that use electromagnetic forces to rapidly accelerate projectiles. Sensors are mounted on each barrel for high precision shooting.

Developed based on the Sword Striker's "Schwert Gewehr" 15.78 meter anti-ship, a pair of them is stored in sheaths next to the lower wings of the IWSP pack. These swords are shorter and do not posses a beam or laser blade emitter so as reduce energy usage. In the event that a beam blade is needed, the pilot can easily switch to the beam boomerang.

Although the Combined Shield has defense, range (30mm 6-barrel Gatling machine gun) and melee attack ability ("Midas Messer" beam boomerang), it also causes the unit’s center of gravity to tilt to the left when equipped. Thus, it is rated lowly by its pilot.

One of two optional beam rifles that Strike E IWSP can use. It has a longer range than the "Shorty" beam rifle.

The other optional beam rifle that Strike E IWSP can use. It has a longer range than the "Shorty" beam rifle and is fitted with a underslung single-shot grenade launcher.

In Mobile Suit Gundam SEED C.E. 73 Δ Astray, after the Acidalium was chased out of Orb, the Martians were immediately attacked by a group of MS lead by Phantom Pain's pilot Sven Cal Bayang. During the battle, Strike Noir's striker pack was damaged by GSF-YAM01 Δ Astray, and Sven forcefully took over the P202QX IWSP Striker used by Waid Rabby Nadaga's Slaughter Dagger to continue the fight. He subsequently defeated Δ Astray using his Strike E IWSP.

Another Strike E IWSP is used by Lukas O'Donnell in Mobile Suit Gundam SEED Frame Astrays. He and his MS were sent to Republic of East Asia Forest Preserve number 13 to assist the EA force there. The Strike E IWSP was used in several battles against the ZAFT force and was later replaced after Lukas obtained GAT-FJ108 Raigo Gundam. 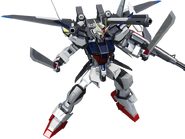 There are minor differences between Morgenroete Inc.'s (used by Orb) and Actaeon Industries' version (used by Earth Alliance, Phantom Pain and Fujiyama Company) of IWSP Pack: