The Star Build Strike Gundam is an upgraded version of the GAT-X105B/FP Build Strike Gundam Full Package. Sei Iori designed this Gunpla to shock participants all over the world in the Gunpla World Tournament. It retains all of the original weaponry from the Full Package, with some of them being redesigned and new features added. It also sports a new backpack—the Universe Booster—armed with two beam cannons and can act as an independent fighter when separated. As Sei utilized the knowledge he gained from building the RX-178B Build Gundam Mk-II when constructing the Star Build Strike, the Gunpla ends up having an inner frame similar to the former's movable frame.

The Star Build Strike also has three unique Plavsky Particles-manipulating systems: the Absorb System, the Discharge System and the Radial General Purpose (RG) System. They are the final product of Sei thinking outside of the Gundam-lore. The Absorb System allows Star Build Strike to absorb enemy beam attacks through its shield. The Discharge System's main purpose is to create a "Plavsky Power Gate" that then allows the use of the absorbed particles to enhance the Gunpla's performance in a specific area. The adaptation of an inner frame gave rise to the RG System, which allows Plavsky Particles to permeate the outside and inside of the Gunpla, increasing its performance. In this form, the Star Build Strike can also perform its strongest attack, the "RG Build Knuckle".

The Star Build Strike Gundam possesses two beam sabers as its primary close combat weapon. Its beam sabers are powerful enough to destroy an enemy unit with a single hit. When not in use, the beam sabers are stored on the side skirts.

The same beam gun as used by the original Build Strike. Additional components are added to transform it into the Star Beam Rifle.

An upgraded version of the Build Strike's "Enhanced Beam Rifle". Its power output can be enhanced further through Discharge Rifle Mode by connecting to the Absorb Shield's charging barrel. The rifle's top barrel can flip over and is only used in Discharge Rifle Mode.

Mounted on the Universe Booster, the Star Beam Cannons' barrel can extend when in use. The beam cannons are positioned under the shoulders when deployed, and can also swing backward to fire at enemy units.

An upgraded version of the original Build Strike's "Chobham Shield". The shield has two new features: the ability to absorb and nullify beam weaponry, and a charging barrel that can attach to the Star Build Strike's beam rifle and amplify its power. However, it has difficulties handling a heavy projectile based assault and when the shield opens up to absorb enemy's beam attack, is unable to defend against beam blade attacks. The shield also cannot absorb beams that are too large, such as the beam from Gundam X Maoh's Hyper Satellite Cannon.

A weapon captured from the PPGN-001 Gundam Exia Dark Matter. Unlike the Exia Dark Matter, the Star Build Strike can also use it as a high-speed projectile by launching it through several small "Plavsky Power Gates". This also has the effect of increasing the sword's penetration capability.

A weapon borrowed from the damaged AC-01 Miss Sazabi after its destruction. It is modified from Sazabi's beam tomahawk and has an additional beam blade emitter extending horizontally from the bottom of the grip. It can also be used as a beam gun.

A pair of weapons from Mao Yasaka's Crossbone Gundam Maoh. Shaped like bones, they can be used as beam rifles, heat swords, or long beam sabers by emitting a beam blade from the barrel.

One of the Star Build Strike Gundam's unique systems. By manipulating Plavsky Particles, it can alter and absorb enemy beam attacks through the Absorb Shield. The absorbed Plavsky Particles can be used later by the Gundam's Discharge System.

Another of the Star Build Strike's unique systems, it can improve the Star Beam Rifle's power or the Gunpla's speed and mobility. However for the Star Build Strike to execute this system, it must first absorb Plavsky Particles through the Absorb System. The number of times the Discharge System can be used seems to be linked to the number of beam attacks absorbed. The Star Build Strike can also use the absorbed particles to generate numerous small "Star Funnels" from the clear red parts on its legs and use them as projectile weapons. These red parts can also generate several small "Plavsky Power Gates", which are used to increase the speed and/or power of a melee attack.

The Absorb Shield's charging barrel is connected to the Star Beam Rifle and the Star Build Strike generates a large "Plavsky Power Gate". The particles absorbed are then transferred to the beam rifle and fired at the gate. When the mode is first used, the particles are fired from the rifle's top barrel and transformed by the gate into numerous beams to hit the target. The charging time required then was long and leaves the Star Build Strike vulnerable to attacks. When the Discharge Rifle Mode is later used at maximum output, the particles are fired from both of the rifle's barrels as well as the Star Beam Cannons at the "Plavsky Power Gate" that converges all of the beams into a single large, devastating beam. The charging time was also greatly reduced, but it is unknown if this is a result of an improvement or an inherent feature of the mode at max output. The reduced charging time may also be directly related to the amount of beams absorbed by the Absorb Shield; the first time the mode is used, it only absorbed a single beam shot from Luang Dallara's Abigorbine; when used at maximum output, the Absorb Shield had already been charged to maximum, by absorbing numerous beam shots from Meijin Kawaguchi's Exia Dark Matter.

The Star Build Strike Gundam generates a large "Plavsky Power Gate" and passes through it, resulting in the materialization of temporary "Plavsky Wings" on the Gunpla's back. These wings are later replaced by the gate, which now releases a particle cloud that is powerful enough to destroy any missiles or funnels caught in its wake. In this mode, the Star Build Strike gains increased speed and manoeuvrability. There seems to be a time limit on how long this mode can be used.

The effects and uses of this mode are unknown as it was not used in the anime.

Unlike other Gunpla that uses only Plavsky Particles on the exterior to move them, the Star Build Strike also saturates its internal components with Plavsky Particles through the RG System to strengthen its performance. The particles can be concentrated in specific internal components to increase their physical strength or used throughout all the internal components, improving the control of the unit and bringing out its full potential. The latter is also sometimes referred to as 'Full Mode', however there may be adverse effects if it is used when the unit's physical condition is poor. The RG System is usually reserved as a last resort to overpower other units up close should all else fails. Most of the gray parts on the Star Build Strike, excluding the Universe Booster, will glow blue when the RG system is activated and a brief glimpse of the Gunpla's inner frame can also be seen.

A new booster pack for the Star Build Strike Gundam, it can increase the unit's power and mobility when docked. Developed from the Build Booster, it is equipped with a pair of beam cannons and can act as an independent fighter when detached from the Star Build Strike. The Universe Booster plays an important role in the Discharge Mode as it is involved in generating the large "Plavsky Power Gate" and is where the "Plavsky Wings" are generated.

The support unit from the RX-178B Build Gundam Mk-II, it is armed with the Beam Rifle Mk-IIs and the Movable Shields. It is attached to the Star Build Strike after it lost its Universe Booster, and allows the Gunpla to fly against the flow of a particle storm when the RG System undergoes a full release. The Star Build Strike also executed the Hyper Build Knuckle while in this form.

Also known as the "RG Build Knuckle", the Build Knuckle is usable only when the RG system is in "Full Mode". It is a powerful punch that is strong enough to counter the Gundam X Maoh's "Maoh Sword". When the RG System and Discharge System are utilized simultaneously, the small "Plavsky Power Gates" can be localized to the arms and enhance the power of the RG Build Knuckle.

A double fisted version of the Build Knuckle. When the small "Plavsky Power Gates" localized to the arms, the double build knuckle is capable of overpowering the beam sabers generated by the Exia Dark Matter in Trans-Am, and still have enough power to land a direct on its torso.

A stronger version of the Build Knuckle, it is used when the RG system initiates a full release. The Hyper Build Knuckle manages to destroy the large Arista crystal, but at the cost of both arms. Whether this is due to excessive strain on the arms or simply the crystal's durability is unknown.

Readying final pitch to the Abigorbine.

After winning the Custom Weapon Battle with the Abigorbine. Note the speed of the winning pitch posted on the scoreboard.

Aiming the Brinicle Blade at the small "Plavsky Power Gates". 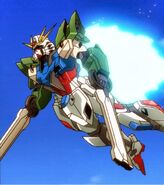 Retrieved from "https://gundam.fandom.com/wiki/GAT-X105B/ST_Star_Build_Strike_Gundam?oldid=469996"
Community content is available under CC-BY-SA unless otherwise noted.