Built by Sei after the 7th Gunpla Battle World Championship, the Build Strike Cosmos is the culmination of all his Gunpla work up until then and is made to fit his battle style.[1][2] Although visually identical to its predecessor, the GAT-X105B/ST Star Build Strike Gundam, the unique systems created by Sei were incorporated in a more refined manner.[1] For example, the RG System was improved and a new feature known as the Absorb Field that seems to be an improvement of the Star Build Strike's Absorb System is added.[3]

A close combat weapon that produces a beam blade when drawn, one is stored on each of the Gunpla’s side armor.

Mounted on the backpack, the two beam cannons are positioned under the shoulders when deployed and their barrels can extend.

Build Strike Gundam Cosmos can use a handheld beam rifle that resembles the Star Build Strike's Star Beam Rifle. Its capabilities are unknown.

Attached to the left forearm, the shield resembles the Star Build Strike's Absorb Shield. Its capabilities are unknown.

The Build Strike Gundam Cosmos was used by Sei Iori during the 8th Gunpla Battle World Championship Japanese Third Block Qualifiers. After the Build Strike Gundam Cosmos launched, its RG System was activated and its Absorb Field was deployed. The Gunpla then charges forward, leaving a colorful Plavsky Particle trail in its wake. It then remained as Sei's regular Gunpla for Gunpla battles.

After Mikio and the other Gunpla Mafia members were arrested, the Build Strike Gundam Cosmos was used by Sei in a battle with the Star Burning Gundam controlled by Reiji, fulfilling the promise between the two friends. The Gunpla was later upgraded into the GAT-X105B/GC Build Strike Galaxy Cosmos. 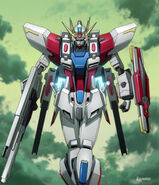 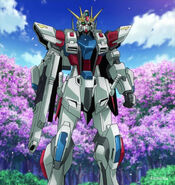 Retrieved from "https://gundam.fandom.com/wiki/GAT-X105B/CM_Build_Strike_Gundam_Cosmos?oldid=460280"
Community content is available under CC-BY-SA unless otherwise noted.