The GAT-X105+P202QX Strike IWSP is a prototype mobile suit, it was featured in Mobile Suit Gundam SEED: Mobile Suit Variations.

Integrated Weapons Striker Pack (IWSP) combines the primary characteristics of the Aile, Sword and Launcher Striker Packs, allowing the Strike Gundam to handle different combat situations with one set of equipment. It also grants mobile suit the ability to fly within the atmosphere. Although powerful, the IWSP is highly complex and difficult to use.

The IWSP was originally developed by PMP Company, but was abandoned due to energy issue. Orb's Morgenroete Inc. later acquired one of the prototypes and solved the energy issue using their superior battery technology. As the Strike IWSP has no ranged beam weapon, it can be equipped with the standard beam rifle if necessary.

After the war, the IWSP is revived by Actaeon Industries in the form of AQM/E-M1 IWSP, which is functionally identical to the earlier P202QX IWSP, despite some differences in appearance. Phantom Pain fit this IWSP pack onto their newly built Strike Gundam which has darker phase-shifted colors. Data obtained from this Strike Gundam IWSP was used in the development of Strike Gundam E, as well as the Noir, Jet and Doppelhorn striker packs.

Mounted in the Strike's head are two 75mm multi-barrel CIWS. This light projectile weapons are used to intercept missiles and to destroy lightly armored vehicles.

Stored in the Strike's side skirt armor is a pair of folding combat knives. These knives do not need power from the suit, can be thrown, and their blades vibrate at high speed allowing them to pierce through most armor except PS armor.

A pair of 115mm railguns is mounted on the IWSP pack, above the 105mm cannons. Railguns are powerful weapons that utilizes electromagnetic forces to rapidly accelerate projectiles. Sensors are mounted on each barrel for high precision shooting.

Developed based on the Sword Striker's "Schwert Gewehr" 15.78 meter anti-ship. These swords are shorter and do not posses a beam or laser blade emitter so as reduce energy usage. In the event that a beam blade is needed, the pilot can easily switch to the beam boomerang. When not in used, the swords are stored in sheaths mounted on the bottom of the IWSP pack.

Although the Combined Shield has defense, range (30mm 6-barrel Gatling machine gun) and melee attack ability ("Midas Messer" beam boomerang), it also causes the suit’s center of gravity to tilt to the left when equipped. As such, it was poorly rated by the pilots and not included when the Noir Striker, IWSP pack's successor, was made.

An optional armament, the beam rifle can be stored on the side skirt armor. It can easily destroy most mobile suits with one shot, or heavily damage warships with several shots, but is mostly ineffective against suits with anti-beam coating. It has an additional handle that can shift to the side, and is often used for extra stability when the Strike IWSP is firing its rifle rapidly.

After the war, Actaeon Industries recreated the IWSP pack and gave it the model number, AQM/E-M1. The AQM/E-M1 IWSP pack was equipped onto a newly built Strike Gundam piloted by Sven Cal Bayang, and data obtained from this Strike Gundam IWSP was used to developed the Strike E, Noir striker, Jet striker and Doppelhorn striker. Additional units of the AQM/E-M1 IWSP were eventually produced and used by the EA's MS during the second war. 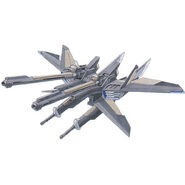 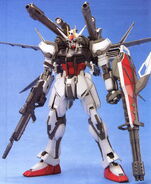