The GAT-X105+AQM/E-YM1 Perfect Strike Gundam is a mobile suit first featured in the eyecatches of the Mobile Suit Gundam SEED HD Remaster, and later made its debut in episode 36 of the HD Remaster. It is the heavy armed variant of the GAT-X105 Strike, and is piloted by Mu La Flaga.

The Perfect Strike Gundam is a configuration of the Strike Gundam equipped with the "AQM/E-YM1 Multiple Assault Striker" - a striker pack that is a combination of the three original striker packs. This allows the Strike to have the high thrust of the Aile Strike Gundam, the heavy firepower of the Launcher Strike Gundam and the close range power of the Sword Strike Gundam, all at once. There are a few visible changes to the Aile Stiker Pack - firstly, its main wings are moved back slightly to make room for the connection points for the "Schwert Gewehr" Anti-Ship Sword and "Agni" Hyper Impulse Beam Cannon, and secondly, four extended batteries are added onto the Aile Striker Pack's back to provide the suit with sufficient energy. Despite its power, the Perfect Strike Gundam has two major problems: its large variety of weapons make it difficult to use them efficiently and the increased weight reduces its mobility. Due to these issues, this configuration was only used once.

Mounted in the Perfect Strike's head are two "Igelstellung" 75mm multi-barrel CIWS guns. These light projectile weapons are used to intercept missiles and to destroy lightly armored vehicles, although it is classified as anti air.

Stored in the Perfect Strike's side skirt armor are a pair of folding "Armor Schneider" combat knives. These knives do not need power from the suit, can be thrown, and their blades vibrate at high speed allowing them to pierce through most armor except PS armor.

The "Schwert Gewehr" 15.78m anti-ship sword is the Perfect Strike's largest and primary close combat weapon. It is a large physical sword that has a laser blade along the cutting edge. The large blade is designed to easily slice mobile suits in half or to cut off sections of a ship such as the guns. Although "Schwert Gewehr" was designed to have a laser gun at the bottom end, the Perfect Strike only uses the prototype model which lacks this feature and has it replaced by a short beam blade emitter. It is stored on the right side of the modified Aile Striker when not in use.

A large beam cannon with a total length of about 20m. By generating and firing plasma energy in a highly compressed state as a burst impulse on the order of microseconds, it can destroy a mobile suit in one shot and blast a hole through a space colony's wall. Although its energy consumption rate to power ratio is high, rapid fire for an extended period of time is possible by connecting to an external power supply. It is mounted on the left side of the modified Aile Striker via an arm unit, and held under the left shoulder when in use.

Since the energy usage became a serious problem when the Aile Striker, the Sword Striker and the Launcher Striker are used at the same time, 4 extended battery packs are mounted onto the modified Aile Striker. Each battery can be jettisoned after its energy is used up in order to avoid being dead-weight.

The Multiple Assault Striker being equipped 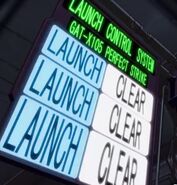 After wiping out a Strike Dagger team with Agni

Destroying a group of Strike Daggers with Buster 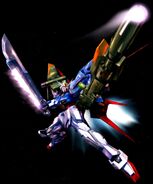 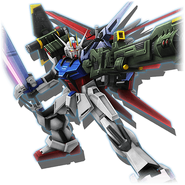 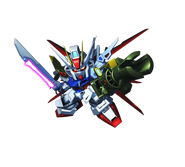 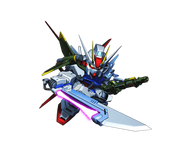 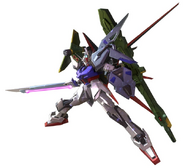 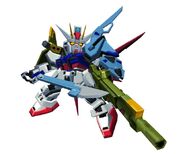 Retrieved from "https://gundam.fandom.com/wiki/GAT-X105%2BAQM/E-YM1_Perfect_Strike_Gundam?oldid=455934"
Community content is available under CC-BY-SA unless otherwise noted.