Originally planned by the Earth Alliance to be Mu La Flaga's personal unit, the Gunbarrel Strike mounts the AQM/E-X04 Gunbarrel Striker as a Striker Pack and allows the suit usage of wire-guided gunbarrel pods (which could only be controlled by one with high spatial awareness, like Mu) and perhaps the Striker's gatling gun. The Gunbarrel Strike is also armed with its standard beam rifle and shield, but it lacks a beam saber to engage in close combat.

Mounted in the Strike's head are two "Igelstellung" 75mm multi-barrel CIWS guns. These light projectile weapons are used to intercept missiles and to destroy lightly armored vehicles, although it is classified as Anti Air.

Stored in the Strike's side skirt armor are a pair of folding "Armor Schneider" combat knives. These knives do not need power from the suit, can be thrown, and are capable of piercing the joints and under-armored sections of ZAFT mobile suits.

The Gunbarrel Strike Gundam is equipped with four gunbarrel pods, each mounting one GAU-758S railgun and two M70AMSAT missiles. These pods are usually mounted on the Striker pack but can be detached and controlled through wires to attack an enemy from multiple directions. Also, the gunbarrels can function as additional boosters when attached to the Striker pack, increasing its speed or the speed of the MS to which it is docked to. The only drawback of the gunbarrel system is the fact that only pilots with high spatial awareness can use it.

Mounted on the bottom of the Gunbarrel Striker, it is positioned backwards when the Striker pack is mounted on the Strike. It is unknown if it can be used by Strike, and if it is possible, it is likely used for firing at pursuing enemy units due to its position.

The Strike's primary ranged weapon, the beam rifle can be stored on the side skirt armor. It can easily destroy a ZGMF-1017 GINN with one shot, but is mostly ineffective against suits with anti-beam coating.

As with all of the G Project mobile suits, the GAT-X105+AQM/E-X04 Gunbarrel Strike is equipped with phase shift armor. When activated the Gunbarrel Strike's color is changed from a light grey to a white scheme with a bit of blue and red mixed in. Phase Shift armor, when activated, renders the Strike immune to physical attacks such as bullets, the GINN sword, or against missiles. However Phase Shift armor continually drains the battery of energy, shortening the mobile suit's combat endurance, and uses up additional energy when it is hit.

While the Strike never uses the Gunbarrel Striker due to Mu's defection from the Earth Alliance in Mobile Suit Gundam SEED, it is possible to alter the events in Tomo to kimi to Koko de and have Mu use the Gunbarrel Strike during the battle at Mendal and afterward. This can be achieved by having Kira Yamato work on the MBF-M1 Astray's OS without looking for Torii. This makes Kira complete the OS faster than he does in the anime series, resulting in Erica Simmons giving a spare M1 Astray to the Archangel to replace Mu's FX-550 Skygrasper. Should Kira visit the MS hangar after the battle at Orb, he will find Mu happily talking about how he is now getting used to piloting MS, although he feels bad for his now obsolete Moebius Zero. Overhearing this, Erica offers to modify the Moebius Zero into a new custom Striker Pack. 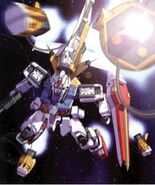 Retrieved from "https://gundam.fandom.com/wiki/GAT-X105%2BAQM/E-X04_Gunbarrel_Strike_Gundam?oldid=437653"
Community content is available under CC-BY-SA unless otherwise noted.