The GAT-X105+AQM/E-X03 Launcher Strike is a prototype long range bombardment mobile suit introduced in the anime Mobile Suit Gundam SEED. It was piloted by Kira Yamato before it was passed down to Mu La Flaga.

When equipped with the Launcher Striker, the GAT-X105 Strike Gundam becomes a mobile suit designed for long range bombardment, capable of taking down fortresses and heavily armored targets. Besides the armament mounted on the Strike itself (which includes head-mounted CIWS guns and combat knives), the Launcher Striker adds the large hyper impulse cannon and a combo weapons pod, which contain a 120mm anti-ship vulcan gun and two 350mm gun launchers, to the armament of the suit. The hyper impulse cannon functions as the Launcher Striker's main weapon, while the combo weapons pod serves a defensive role against enemy mobile suits and missiles. Although the Launcher Strike has reduced mobility due to the weight of its heavy equipment, its capabilities make it a very effective mobile turret.

Stored in the Strike's side skirt armor are a pair of folding "Armor Schneider" combat knives. These knives do not need power from the suit, can be thrown, and their blades vibrate at high frequencies to pierce through most armor except PS armor.

The primary weapon of the Launcher Strike, this large beam cannon with a total length of about 20m was one of the most powerful mobile suit mounted beam weapon at its introduction. It generates and fires critical plasma energy in a highly compressed state as a burst impulse in the order of microseconds, easily destroying a mobile suit in one shot and blasting a hole through a space colony's wall. Although its energy consumption is high, repeated firing for an extended period of time is possible by connecting to an external power supply. It is mounted on the left side of the backpack via an arm unit, and held under the left shoulder when in use.

The secondary weapon of the Launcher Strike, it is a close range, defensive, composite armament unit consisting of a 120mm anti-ship vulcan gun and two 350mm gun launchers. It is mounted on the right shoulder and can lock onto multiple targets simultaneously. The 120mm anti-ship vulcan gun is effective in intercepting MS at close-mid range and can also be used for anti-ship combat. As for the 350mm gun launchers, they are missile launchers, but can also fire a variety of projectiles including grenades.

As with all of the G Project mobile suits, the GAT-X105+AQM/E-X03 Launcher Strike is equipped with phase shift armor. When activated the Launcher Strike's color is changed from a light grey to a white scheme with a bit of blue and red mixed in. Phase Shift armor, when activated, renders the Strike immune to physical attacks such as bullets, the GINN sword, or against missiles. However Phase Shift armor continually drains the battery of energy, shortening the mobile suit's combat endurance, and uses up additional energy when it is hit.

The Launcher Striker pack is one of the first three Striker Packs created by the Earth Alliance as part of their G Project. The Launcher Strike was first used in Heliopolis as a means to increase the power of the radio's signal. However Kira Yamato would have to use the Launcher Strike's Agni cannon to fight off Rau Le Creuset. The powerful beam managed to destroy the arm of Rau Le Creuset's ZGMF-515 CGUE, but at the same time blasted a hole in the side of Heliopolis. The action did have the desired result of forcing Rau to retreat.

The Launcher Strike's second use was in space during a battle against the captured G-Units. The GAT-X105+AQM/E-X01 Aile Strike Gundam ran low on power and was in danger of being captured. As an emergency procedure, the Launcher Striker pack was launched on the catapult in order for Kira to switch out the equipment. Kira succeeded right as a grenade fired from the GAT-X102 Duel Gundam struck. Re-energized, the Launcher Strike used its Agni to force the other Gundams to retreat.

The first Striker pack that the Strike used on Earth was the Launcher Striker. The Launcher Strike was used in a desert battle against multiple TMF/A-802 BuCUEs. At first, the battle go poorly as the Launcher Strike's movement program was not adapted for the sandy terrain, meaning it could barely move while the BuCUE continued their high-speed attack. Eventually Kira made the proper adjustments and managed to fend off the BuCUEs. 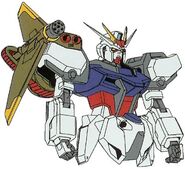 Turning around (What Stands in the Way, HD Remastered) 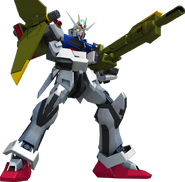