The GAT-X105+AQM/E-X02 Sword Strike is a prototype close-quarters combat mobile suit introduced in the anime Mobile Suit Gundam SEED. It is piloted by Kira Yamato.

The Sword Strike is a mobile suit designed for close quarters combat, making it the most suitable choice in an area where little collateral damage can be risked such as in a colony interior, or within the hanger of an allied base. Besides the armament mounted on the GAT-X105 Strike Gundam itself (which includes head-mounted CIWS guns and combat knifes), the Sword Striker adds a large anti-ship sword, a rocket anchor and a beam boomerang to the armament of the suit. Of all the Striker Packs available for the Strike, Sword Striker is the lightest. It also has the highest combat endurance as its energy consumption is the lowest, and can be used for aquatic combat as most of its weapons can be used underwater.

The "Schwert Gewehr" 15.78m anti-ship sword is the Sword Strike's largest and primary weapon. It is a large physical sword that has a laser blade along the cutting edge. The large blade is designed to easily slice mobile suits in half or to cut off sections of a ship such as the guns. Although "Schwert Gewehr" was designed to have a laser gun at the bottom end, Strike only uses the prototype model which lacks this feature and has it replaced by a short beam blade emitter. Due to its sharp tip, the sword can also be used for aquatic combat. It is stored on the right side of the backpack when not in use.

Mounted on the left forearm, the front portion is a rocket-propelled anchor that is shot out on a reinforced polymer cable. The anchor's claw can open and close to capture or destroy the target. The cable's reel case is installed behind the front portion, and the entire weapon can function as a shield with anti-beam coating. The weapon can also be used for aquatic combat and can defend against the Phonon Maser.

A throwing weapon that emits a short beam blade on one end, and can return to the owner after throwing, often catching enemy units by surprise. It is equipped with a system similar to the beam saber, and the generated beam blade does not dissipate when it leaves the Gundams' hand due to the in-built large-capacity power condenser. It is stored on Sword Strike's left shoulder armor when not in use. Normally the Beam Boomerang cannot be used underwater, but the manga adaptation depicted the Sword Strike destroying a UMF-5 ZnO underwater by activating the weapon's beam emitter on contact with the mobile suit.

The Sword Strike was first used during the Battle of Heliopolis to counter a ZAFT attack composed of ZGMF-1017 GINNs using D-equipment, in an attempt to minimize damage within the colony, which was already near-collapse. The Sword Strike destroyed one GINN using a combination of its Midas Messar and Schwert Gewehr.[1]

Its second use occurred during the Battle of Artemis, when the GAT-X207 Blitz Gundam had infiltrated the base and destroyed the light-wave shield emitters while the Archangel was stationed inside the asteroid. The Sword Strike sortied against it in an attempt to minimize collateral damage and to buy time for the Archangel to exit the base.[2]

Due to the suitability of its weapons, the Sword Strike was utilized in aquatic battles against ZAFT forces' amphibious mobile suits when the Archangel travelled over the Red Sea. During the Second Equatorial Skirmish, the Sword Strike fought against ZAFT commander Marco Morassim and his UMF-5 ZnO, and prevailed by using the "Armor Schneider" knives to deliver the killing blow.[3] 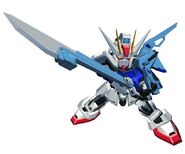 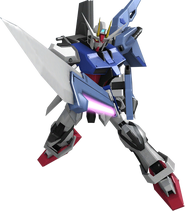