The GAT-X105+AQM/E-X01 Aile Strike is a prototype high mobility mobile suit introduced in Mobile Suit Gundam SEED. Its primary pilot was Kira Yamato before it was passed down to ace pilot Mu La Flaga.

The AQM/E-X01 Aile Striker is the most commonly equipped Striker pack for the Strike as it provides the greatest versatility. Thanks to the powerful vernier thrusters built into the Aile Striker, the Strike Gundam becomes an all purpose combat mobile suit with enhanced speed and maneuverability compared to its base capabilities.

Despite the strength of the thrusters, they do not perform well enough for true flight capabilities inside Earth's atmosphere. However, they do allow the Strike to glide in the air for a short time and enhance its jumping capabilities to the point that it can combat mobile suits on Guuls that are flying low. Besides the standard armament of the GAT-X105 Strike Gundam, the Aile Striker pack adds a pair of beam sabers to the suit's armament.

Stored in the Aile Striker is a pair of beam sabers. These are the Aile Strike's primary close combat weapons and can slice through any armor that does not have an anti-beam coating. One can be used as a reserve weapon, or both can be used simultaneously in a twin sword fashion.

Aile Strike's primary ranged combat weapon, it can be stored on the side skirt armor. The beam rifle can easily destroy a ZGMF-1017 GINN with one shot, but is mostly ineffective against suits with anti-beam coating. It has an additional handle that can shift to the side, and is often used for extra stability when the Aile Strike is firing its rifle rapidly.

The bazooka is an optional weapon that fires explosive shells and is loaded with four magazines. Because it is a conventional weapon, the bazooka does not draw power from the Strike's battery and this results in extended combat endurance. Another advantage is that the bazooka can be used underwater, unlike a beam rifle. The disadvantage is that its greater size and weight makes it somewhat less mobile then the beam rifle. Used by the Aile Strike in the manga Gundam SEED Re:, the Bazooka had an alternate Shrapnel munition.

A weapon borrowed from the Sword Striker, the "Schwert Gewehr" 15.78m anti-ship sword is a large physical sword that has a laser blade along the cutting edge. The large blade is designed to easily slice mobile suits in half or to cut off sections of a ship such as the guns. Although "Schwert Gewehr" was designed to have a laser gun at the bottom end, Strike only uses the prototype model which lacks this feature and has it replaced by a short beam blade emitter. Due to its sharp tip, the sword can also be used for aquatic combat. Used by the Aile Strike in the manga Gundam SEED Re:.

Another weapon borrowed from the Sword Striker, it is mounted on the left forearm. The front portion is a rocket-propelled grappling claw that is shot out on a line to hit or grab an enemy unit. The whole weapon itself can function as a shield and has anti-beam coating to defend against beam weapons. It can also be used for aquatic combat and can defend against the Phonon Maser. Used by the Aile Strike in the manga Gundam SEED Re:.

As with all of the G Project mobile suits, the GAT-X105+AQM/E-X01 Aile Strike is equipped with phase shift armor. When activated the Aile Strike's color is changed from a light grey to a white scheme with a bit of blue and red mixed in. Phase Shift armor, when activated, renders the Aile Strike immune to physical attacks such as bullets, the GINN sword, or against missiles. However Phase Shift armor continually drains the battery of energy, shortening the mobile suit's combat endurance, and uses up additional energy when it is hit.

When the Earth Alliance created the Strike, it gave it the ability to mount Striker Packs to adapt to different combat situations. Among them, the Aile Striker pack has the highest versatility and is the most frequently used. Kira Yamato used the Aile Strike Gundam several times during his encounters with the Le Creuset Team in space, and it was in the Aile Strike that Kira made a forced atmospheric entry. On Earth, the Aile Strike continued to see heavy use, such as against Andrew Waltfeld's desert troops and part of the Le Creuset Team led by Athrun Zala. During a battle with Athrun's GAT-X303 Aegis Gundam at the outskirt of Orb, the Aile Strike was heavily damaged when the Aegis self-destructed at point-blank. However, Kira managed to survive and the wreckage of the Strike was recovered by Orb.

Orb eventually restored the Strike and handed it over to the crew of the Archangel when the latter seeked shelter after the destruction of the Earth Alliance's JOSH-A base. Mu La Flaga then became the Strike's pilot and used the Aile Strike during the Battle of Orb. In the HD Remaster, Mu used the GAT-X105+AQM/E-YM1 Perfect Strike Gundam instead of the Aile Strike in this battle. When the Archangel returned to space, Mu used the Aile Strike in multiple battles against both the Alliance and ZAFT forces. During the Second Battle of Jachin Due, Mu and the Aile Strike fought Rau Le Creuset and his ZGMF-X13A Providence Gundam, but was defeated and heavily damaged by the Providence's DRAGOONs. The damaged Aile Strike Gundam was later destroyed when Mu used it to block the Dominion's positron cannon shot that was aimed at the Archangel. Mu survived the attack, but was severely injured and lost his memories.

In the first opening of Gundam SEED (Original)

In the second opening of Gundam SEED (Original)

Slicing a BuCUE in half with a Beam Saber

Slicing the weapon off a BuCUE's back-mounted turret

Being destroyed (The Final Light, Original) 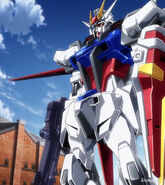 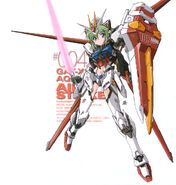 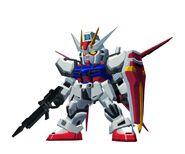 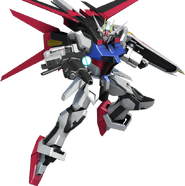 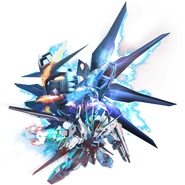 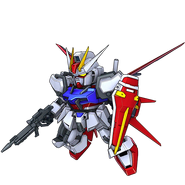 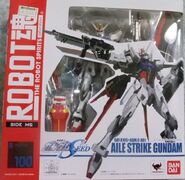 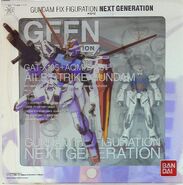 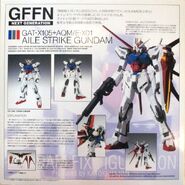