The Verde Buster Gundam is a modified GAT-X103 Buster Gundam produced as part of the "Actaeon Project", a joint development between several companies led by Actaeon Industries and Phantom Pain. The main aim of this project is to create customized MS for use by Phantom Pain's ace pilots. Like the original Buster Gundam, the Verde Buster is designed mainly as an artillery mobile suit and thus features a set of heavy armament consisting of a beam cannon, a gun launcher, missile pods and two powerful beam rifles, which also mount bayonets for close combat and hence increase the number of combat situations the MS can handle. To complement the additional weapons, the FCS and sensors system have been improved, leading to enhancement in the MS's accuracy. Other modifications include the installation of the power extender, Variable Phase Shift armor, and a new face guard to protect the enhanced main sensor on the forehead during close combat.

An updated version of the Buster's 94mm high-energy beam rifle. It is mounted on the left shoulder.

An updated version of the Buster's 350mm gun launcher. Mounted on the right shoulder, it adopts a smooth bore barrel and can fire various warheads. As the gun launcher and beam cannon are now shoulder mounted, they cannot combine like the original version.

The only new addition to the Verde Buster's armament is a pair of composite bayonet beam rifles, which are mounted on the hips, with their grips handheld when in use. The bayonet at the bottom of the rifle unfolds during close combat, and can generate a force field that allows it to penetrate most normal armor other than PS armor. The rifles can combine into a twin cannon mode for longer range attack, which is strong enough to severely damage a space station. The bayonets' field generator also serves as a beam guidance device in cannon mode, contributing to extending the beam's effective range.

An improved version of the phase shift armor with greater energy efficiency. The voltage applied to the armor can be adjusted, and this changes the armor's strength and color to meet the needs of the mobile suit and its pilot.

A large-capacity power pack added to the power supply system. This device improves a mobile suit's energy storage capacity, allowing it to use its VPS armor for a longer duration.

After the First Alliance-PLANT War, as part of the "Actaeon Project" MS development plan, another Buster was manufactured and assigned to Phantom Pain pilot, Shams Couza. It was subsequently upgraded into the Verde Buster according to Phantom Pain’s instruction. One of the suit's sorties was against a ZAFT unit which attacked the Hannibal-class Bonaparte, carrying the GFAS-X1 Destroy Gundam. While the Verde Buster easily holds its own against ZAFT's forces, its companion, the GAT-X1022 Blu Duel Gundam was destroyed by a squad of TMF/A-802W2 Kerberos BuCUE Hounds.

Later, Shams and Verde Buster were assigned to the Nana Buluku, which attacked the DSSD space station to steal the AI unit of the GSX-401FW Stargazer Gundam. During the battle, Shams destroyed a large number of the DSSD's UT-1D Civilian Astray DSSD Customs but when ordered to retreat, he was overcome with rage and continued to fire on the station. Even when he was warned that his suit's energy would soon be depleted, he continued firing until there was no energy left. The Verde Buster was then destroyed in a hail of beam fire from the remaining Civilian Astray DSSD Customs. Despite this, Shams died smiling. 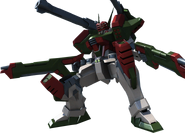 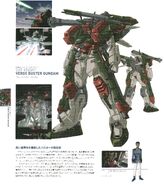