The GAT-X102 Duel Gundam is the first mobile suit developed under the Earth Alliance's "G Project" in the Mobile Suit Gundam SEED series.

The Duel Gundam is the earliest unit to be developed in the Earth Alliance's G Project series of prototype MS. Equipped with the new Phase Shift armor that makes it nearly impervious to most physical weapons, the Duel is designed as a general-purpose machine that has well-balanced performance, and also serves as a development base for the other MS in the project.

The Duel's armament consists of two head-mounted "Igelstellung" 75mm multi-barrel CIWS guns, which later become standard weaponry on most Earth Alliance's suits to intercept incoming missiles and closing in enemy units, two beam sabers stored on the backpack and hand-carried for use in close combat, a 57mm high-energy beam rifle with an attached 175mm grenade launcher for ranged combat, and an anti-beam coated shield for defense. Duel also has a rail bazooka as an optional weapon, but it was taken and used by MBF-P01 Gundam Astray Gold Frame to escape from Heliopolis.

After being stolen by ZAFT and damaged in battle with the GAT-X105+AQM/E-X01 Aile Strike Gundam, the suit is upgraded with the Assault Shroud. The Assault Shroud is a set of ejectable armor mounted on the Duel’s body to enhance overall combat performance. It adds a "Shiva" 115mm railgun to the right shoulder and a 220mm 5-barrel missile pod to the left shoulder for additional firepower, as well as various leg and backpack-mounted thrusters for better mobility. Although the equipment worked well in space, it performs poorly under gravity due to its bulk.

Mounted in the Duel's head are two "Igelstellung" 75mm multi-barrel CIWS guns. Although classified as an anti-air weapon, these light projectile weapons can be used to intercept missiles and to destroy lightly armored vehicles.

Mounted in the backpack, these are the primary close combat weapons and can slice through any armor without an anti-beam coating. One can be used as a reserve weapon, or both can be used simultaneously in a twin sword fashion.

The Duel's main ranged weapon, it has a single-shot grenade launcher under the barrel. The beam rifle can easily destroy a ZGMF-1017 GINN with one shot, but is mostly ineffective against armor with anti-beam coating. It is stored on the side skirt armor when not in use. The same beam rifle is later used by other mobile suits.

Fitted underneath the barrel of the beam rifle. It can fire a variety of grenades, but is a single-use weapon.

Mounted on the right shoulder of the Assault Shroud armor, this weapon uses electromagnetic forces to launch the projectile.

Mounted on the left shoulder of the Assault Shroud armor, it is similar to those on the GAT-X103 Buster Gundam.

A piece of equipment that increases the Duel's defensive capability, it is mounted on the left forearm and/or handheld. The shield does not have phase shift armor, so it is not as durable as the Duel's body armor, however, it also does not drain energy each time it is hit. The shield's major advantage is that it is anti-beam coated and can block or deflect beam weapon attacks, against which phase shift armor is ineffective. The same shield is also used by Strike Gundam and other mobile suits. The shield can seemingly be stored on the rear waist armor when not in use.

A handheld range weapon that uses electromagnetic forces to launch its projectile. Originally developed for the Duel Gundam, it was taken for use by the MBF-P01 Gundam Astray Gold Frame.

A weapon borrowed from the GAT-X103 Buster Gundam, this beam cannon type weapon has a very high energy output, firing a larger beam that is capable of penetrating several targets, including battleships.

As with all of the G Project mobile suits, the Duel is equipped with phase shift armor. When activated the Duel's color is changed from a light grey to a blue and white scheme with a bit of orange mixed in. Phase Shift armor, when activated, renders the Duel immune to physical attacks such as bullets, the GINN sword, or against missiles. However, Phase Shift armor continually drains the battery of energy, shortening the mobile suit's combat endurance, and uses up additional energy when it is hit.

A ZAFT manufactured add-on, built for the Duel after it was damaged in combat. It is based on similar equipment used by the ZGMF-1017AS GINN Assault Type and the ZGMF-515AS CGUE Assault. The Assault Shroud increases the Duel's battle effectiveness by granting it extra armor and new weapons like the "Shiva" Railgun and a Missile Pod. It also contains additional vernier thrusters to enhance Duel's mobility in space and offset some of the added weight. However, the latter is effective only in space and the extra bulk still hinders the Duel's movement when under gravity. If a lethal or heavily damaging strike is suffered, the Assault Shroud can be detached, and the Duel Gundam can still fight using its basic form and weaponry.

The Duel Gundam was the first mobile suit developed under the Earth Alliance's G Project during the First Alliance-PLANT War. It served as a testbed for the GAT-X103 Buster Gundam, GAT-X105 Strike Gundam, GAT-X207 Blitz Gundam, GAT-X303 Aegis Gundam. On January 25, CE 71, the Duel was stolen from Morgenroete Inc.'s Heliopolis facility by ZAFT mobile suit pilot, Yzak Jule of the Le Creuset Team, and taken back to the team's mothership, the Vesalius.[1]

Together with the stolen Buster, Blitz, and Aegis, the Duel was deployed in the pursuit of the Strike and the new Alliance battleship, the Archangel, and along the way, it was also involved in severely damaging the Eurasian Federation space fortress Artemis. During one of the subsequent battles with the GAT-X105+AQM/E-X01 Aile Strike Gundam, the Duel was hit below its left chest by the enemy's Armor Schneider combat knife, leading to an explosion in the cockpit that left a scar on Yzak's face.[2]

Later, the Duel was upgraded with the Assault Shroud and took part in the operation to stop the Archangel from descending to Earth. During the Battle of Orbit, the Duel Gundam Assault Shroud fought against the Alliance's 8th Fleet, which was protecting the Archangel, and had a rematch with the Aile Strike. As Yzak was too caught up in the fight, the Duel Gundam Assault Shroud was caught in the Earth's gravity well and could not return to its allies. Despite this, Yzak continued shooting at the Aile Strike, and even shot down a shuttle launched from an Alliance ship that got in his way, unaware that it was carrying civilian refugees.[3]

Yzak and the Duel Gundam Assault Shroud survived the atmospheric entry alongside the Buster and its pilot, Dearka Elsman, and they were then assigned to Andrew Waltfeld's North Africa team. The two Gundams were deployed atop the Lesseps in the Battle of Talbadiya against the Archangel as they could not keep up with the TMF/A-802 BuCUEs. Yzak later tried to get more involved in the fight, but failed as the Duel Gundam Assault Shroud was not properly adjusted to the soft and sandy terrain.[4] Following the defeat of Andrew Waltfeld's forces, the Duel Gundam Assault Shroud and Buster met up with the Blitz and Aegis that arrived on Earth, and they operated from a Vosgulov-class submarine. The group then made two separate failed attacks on the Archangel, with the former ending due to the battle encroaching on Orb Union's waters,[5] and the latter resulting in the destruction of the Blitz and death of its pilot, Nicol Amalfi.[6]

The Duel Gundam Assault Shroud then took part in the disastrous Operation Spitbreak,[8] the attack on the Alliance's JOSH-A base, as well as the successful attack on the Panama Base, where the Gundam easily defeated the Alliance's first mass-produced mobile suit, the GAT-01 Strike Dagger.[9] During the Battle of Panama, Yzak and his Duel Gundam Assault Shroud also fought against the GAT-01D Long Dagger (which was developed using Duel Gundam Assault Shroud's data and used a similar set of armor known as "Fortestra") piloted by Alliance's ace pilot, Jean Carry. However, this duel was cut short when ZAFT forces activated the Gungnirs and disabled all Alliance mobile suits, but Yzak spared Jean, allowing him to escape.[10]

The Duel Gundam Assault Shroud eventually returned to space and took part in various battles, such as the battle around the Mendel colony where Yzak learnt that Dearka had defected to the Three Ships Alliance along with the Buster.[11] In the Second Battle of Jachin Due, the last battle of the war, the Duel Gundam Assault Shroud defended the PLANTs against the Alliance's nuclear missiles attack, with assistance from the Three Ships Alliance.[12] Later, Yzak protected the Three Ship Alliance's MBF-02+AQM/E-X01 Aile Strike Rouge from the Earth Alliance's GAT-X252 Forbidden Gundam and even destroyed the Forbidden by sacrificing the Assault Shroud as a decoy.[13] Subsequently, Yzak and the Duel helped the Buster, that was heavily damaged by ZAFT's ZGMF-X13A Providence Gundam, and then used the Buster's hyper impulse long-range sniper rifle to destroy the Alliance's GAT-X370 Raider Gundam that attacked both of them.[14]

Duel and Buster were later picked up by the Archangel. Afterwards, Duel headed out using the Strike's spare shield and rifle to protect the Archangel as the ship joined up with the Eternal and Kusanagi. The Duel was apparently decommissioned in the aftermath of the war. Meanwhile, on the Alliance's side, as part of the "Actaeon Project" MS development plan that was initiated after the war, another Duel Gundam was manufactured and piloted by Phantom Pain pilot, Mudie Holcroft. The unit was later modified into the GAT-X1022 Blu Duel Gundam.

Appearing in the manga Mobile Suit Gundam SEED Re: it is the Duel Gundam equipped with a new atmospheric flight pack on its backpack. The pack is based on data fragments of the GAT-X105 Strike Gundam's IWSP pack that ZAFT recovered while in Heliopolis. It is built with parts from the AMF-101 DINN, and is armed with a pair of swords similar to the YFX-200 CGUE DEEP Arms's Heavy Laser Sword but with solid blades, as well as a pair of double barrel cannons where the top barrel is a beam cannon and the bottom barrel is a railgun. The equipment also allows the Duel Gundam to enter a 'High Mobility Mode' whereby its head is covered by an aeroshell helmet similar to the one used by the DINN. 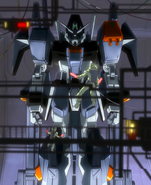 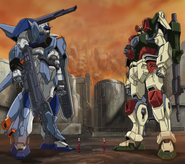 Charging after ejection of Assault Shroud (The Final Light, Original)

Firing CIWS (To a Future that Never Ends, HD Remastered)

Guarding the Archangel with Strike Gundam's spare Beam Rifle and Shield (To a Future that Never Ends, HD Remastered)

Duel Gundam (Atmospheric Equipment) (in foreground) on Earth with the other four stolen Gundams in Mobile Suit Gundam SEED Re: 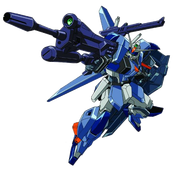 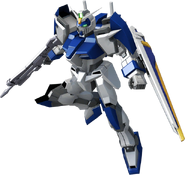 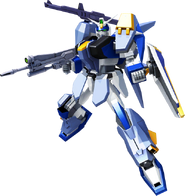 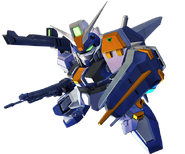 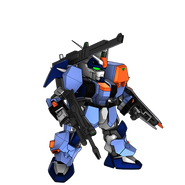 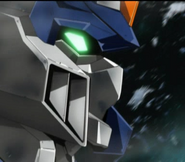 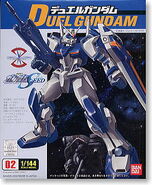 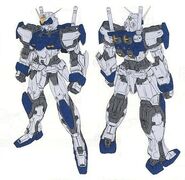 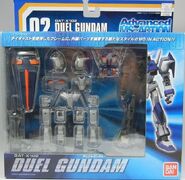 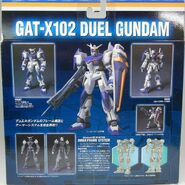 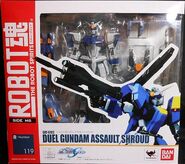 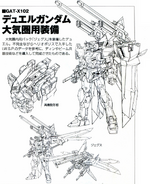