The GAT-X1022 Blu Duel Gundam is a mobile suit that appears in the OVA Mobile Suit Gundam SEED C.E. 73: STARGAZER.

The Blu Duel Gundam is a modified GAT-X102 Duel Gundam produced as part of the "Actaeon Project", a joint development between several companies led by Actaeon Industries and Phantom Pain. The project's main aim is to create customized MS for use by Phantom Pain's ace pilots. The Blu Duel is designed with an emphasis on melee combat to maximize combat efficiency in group battle tactics with the GAT-X105E+AQM/E-X09S Strike Noir Gundam and the GAT-X103AP Verde Buster Gundam.

Mounted on various parts of the Blu Duel, the additional armor "Fortestra" is a redesigned version of the one used by the GAT-01D Long Dagger and GAT-01D1 Duel Dagger, and featured enhanced thrusters and weapons for better mobility and offensive capabilities. It is also fully integrated with Blu Duel's body and cannot be ejected. This allows the application of the VPS armor to be extended to the Fortestra, enhancing its armor capability. At the same time, the mounting sites of the Fortestra are selected to preserve the suit's range of motions and avoid adding unnecessary weight, thereby enhancing defensive capabilities without reducing mobility.

With the exception of the two head-mounted CIWS guns, the armaments of the Blu Duel are mounted or stored in the Fortestra armor: a shield with railgun mounted on the right shoulder armor, a pair of retractable beam guns attached to the forearms' armor, two beam sabers stored on the legs' armor, and three anti-armor penetrators in the left shoulder's armor. Like the Strike Noir and the Verde Buster, the Blu Duel is also equipped with a power extender to increase its energy storage capacity.

A pair of shell-firing armament built into the head. While not very effective at damaging the armor of a MS, they serve as point-defense weapons for destroying incoming missiles, enemy aircraft/fighters and other light-armored targets or to deter enemy MS from closing in. The Blu Duel's use of the smaller caliber 12.5mm "Todesschrecken" CIWS as compared to the older 75mm "Igelstellung" CIWS allows it to store more ammunition for the weapon.

A small throwing knife that can also be used as a bomb, three are stored in the left shoulder's Fortestra armor. Same as the ones used by the GAT-04 Windam and the GAT-02L2 Dagger L, the vernier at the back of the weapon propels it forward after it is thrown, and once it pierce the enemy's armor, it explodes to cause damage.

Attached to the forearms' Fortestra armor, the two retractable beam guns are carried in the hands when in use. Their small size made them easy to wield during close combat, while their high rate of fire allows Blu Duel to suppress a large number of enemy units quickly.

Two beam sabers are stored on the legs' Fortestra armor for close combat. They are created by Phantom Pain for their own use and are a modified version of the ES04B beam saber used by Windam and Dagger L. They have greatly improved reliability and durability.

The same shield as used by the original Duel, but mounted on the universal mount of the right shoulder's Fortestra armor, allowing it to move independently.

Mounted on the shield's underside, this gun uses electromagnetic forces to launch projectiles. It can rotate during use, ensuring a wide angle of fire.

An improved version of the phase shift armor with greater energy efficiency. The voltage applied to the armor can be adjusted, and this changes the armor's strength and color to meet the needs of the mobile suit and its pilot. For Blu Duel, the armor is applied to its normal body armor and to its "Fortestra" armor.

A large-capacity power pack added to the power supply system. This device improves a mobile suit's energy storage capacity, allowing it to use its VPS armor for a longer duration.

During the First Alliance-PLANT War, the Earth Alliance collaborated with Orb's Morgenroete Inc. to create their own series of mobile suits. One of the suit produced under this "G Project" was the GAT-X102 Duel Gundam, which together with three other suits, was stolen by ZAFT. After the war, as part of the "Actaeon Project", another Duel Gundam was manufactured. It was assigned to Phantom Pain pilot, Mudie Holcroft, and subsequently upgraded into the more powerful Blu Duel Gundam. Mudie and her Blu Duel often work in a team together with Sven Cal Bayang and his GAT-X105E+AQM/E-X09S Strike Noir Gundam, as well Shams Couza and his GAT-X103AP Verde Buster Gundam.

Later, Mudie and her comrades protected the land battleship Bonaparte from a ZAFT attack. During the fight, her Blu Duel lost its right arm and shield/railgun to an attack by a TMF/A-802 BuCUE, while a second shot off its left leg, causing it to fall to the ground. Mudie was killed when three TMF/A-802W2 Kerberos BuCUE Hounds attacked her damaged suit and tore into its cockpit using their beam fangs. The three Kerberos BuCUE Hounds were subsequently destroyed by Sven and his Strike Noir Gundam. 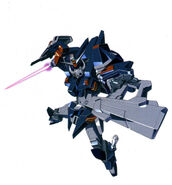 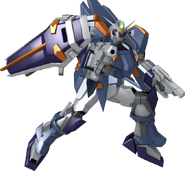