The GAT-SO2R N Dagger N is a limited production special operations stealth mobile suit, it is featured in the original design series SEED DESTINY-MSV and made an appearance in the manga Gundam SEED Destiny Astray.

The N Dagger N is developed based upon the GAT-01A1 Dagger and infused with technology used by the GAT-X207 Blitz Gundam. The 'SO' in its model code stands for 'Special Operations', and it is mainly used for destroying enemy’s defensive positions and facilities at the rear of the frontline, recon, kidnapping, assassination, etc. To fulfil its role, the suit is equipped with Mirage Colloid Stealth System and Neutron Jammer Canceller, the latter allowing it to be powered by a nuclear reactor that grants the suit unlimited operation time while cloaked. However, since both technologies were forbidden under the Junius Treaty, the N Dagger N was produced in secret, with an unknown number of units finally produced. The Earth Alliance does not acknowledged the suit's existence, but it is an open secret. The N Dagger N is primarily armed with close combat weapons, including an anti-armor penetrator, a pair of swords, a rocket-propelled claw, and a shield mounted with a energy blaster. The suit is also equipped with multi-purpose launcher ports all over its body.

The N Dagger N is equipped with a rocket-propelled anti-armor penetrator stored in its right side armor. This is the same weapon as used by the GAT-02L2 Dagger L, and can be used for close combat or as a throwing weapon, which can destroy a single suit if it hit a critical spot.

Mounted on the left side armor of the suit is a pair of anti-armor swords, with one sword being longer than the other. The swords are similiar in appearance to a samurai's 'Daito' and 'Wakizashi'.

A simplified version of the Blitz Gundam's "Trikeros" Offensive Shield System, the "Schildgewehr" is mounted on the right forearm. It is a shield with a mounted energy blaster, and allows the suit to switch between offense and defense quickly.

Mounted on the "Schildgewehr" Offensive Shield System, the energy blaster is the N Dagger N's main ranged weaponry and its only beam weapon. Its muzzle is bigger than that of the beam rifle mounted on Blitz Gundam's "Trikeros".

Like the Blitz Gundam, the N Dagger N is fitted with the Mirage Colloid stealth system, which renders the suit completely invisible to the naked eye and sensors when activated, thus helping the suit in its covert missions. As the suit was produced after the Junius Treaty, this feature is in violation of the treaty, which bans the use of the stealth system.

The Neutron Jammer Canceller counters the effects of the ubiquitous Neutron Jammers and allows the N Dagger N to be powered by nuclear reactors. This helps the suit to meet the high energy consumption of the Mirage Colloid stealth system and to use it for an unlimited amount of time, unlike the Blitz Gundam, which can only used the system for 80 minutes. This feature is also in violation of the Junius Treaty, which also bans the use of Neutron Jammer Canceller by MS.

17 multi-purpose launcher ports are installed across the body of the suit. These ports are normally equipped with rocket anchors like those of the GAT-X105E+AQM/E-X09S Strike Noir Gundam, but can be switched for other equipment. The two anchors mounted inside the hands can quickly establish an up-link to another machine's computer system when launched and copy the data stored on it.

The N Dagger N was in secret development before the signing of the Junius Treaty, and after the treaty was signed, this secrecy was increased in further. On the surface, its development was stopped and the team disbanded; in fact, it continued in extreme secrecy. The team carried on the development in a spontaneous manner, resulting in the appearance that the military and other companies were not involved. As such, the developers self-ridiculed their shadow-like existence and called themselves “Ninja Works”. This name gave rise to one of the "N" in the suit's name, while the other "N" stands for 'Neutron'.

In October 73, a single N Dagger N meets up with a spy who stole data from the ZAFT colony, Armory One. After copying the data from the shuttle, the stealth suit destroys it. Later, two N Dagger N units take part in the Armory One raid, but are intercepted by Courtney Heironimus in his XMF-P192P Proto-Chaos. Another unit is piloted by Stephen Wiltshire, who participated in the battle of Heaven's Base and protected the Nibelung anti-aircraft cannon from being discovered by ZAFT's reconnaissance team before it is used.[1] One abandoned unit is commandeered by Orb MS pilot, Takito Haya Oshidari, who led his team in an attempt to rob the Seiran mansion.[2] 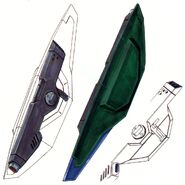 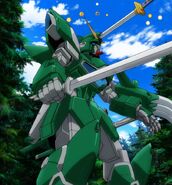 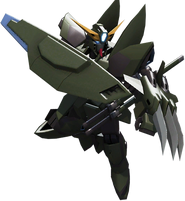