The GAT-FJ108 Raigo Gundam is a prototype multi-mode mobile suit featured in the manga series Mobile Suit Gundam SEED Frame Astrays. It is first piloted by Gai Murakumo and then by Lukas O'Donnell.

The Raigo is developed by Fujiyama Company based on GAT-X105E Strike Gundam E, with assistance from Actaeon Industries. It can utilize the Striker Pack system and is equipped with Variable Phase Shift armor. Using its Another Trial Striker Packs, which seems to be developed based on those created by Actaeon Industries, the Raigo can be outfitted for high mobility combat (Speculum Raigo), long ranged assault (Sumbullet Raigo), or heavy melee combat (Caliburn Raigo).

The same beam rifle as used by the GAT-X105 Strike Gundam, it can easily destroy a MS with one shot, but is mostly ineffective against suits with anti-beam coating. It can be used together with the Speculum Striker.

A small shield can be attached to each forearm to improve Raigo's defense capabilities.

Stored in each shield is a "Armor Schneider" Combat Knife, which don't need power from the suit and capable of piercing the joints and under-armored sections of mobile suits.

The same shield as used by Strike Gundam, it is used to intercept attacks that the pilot cannot, or will not dodge. It can be used together with the Speculum Striker.

Raigo Gundam can be equipped with custom Another Trial Striker packs. Each striker pack is designed to outfit the MS with the equipment needed to fulfill specific combat roles.

Similar to the Aile Striker, the Speculum Striker increases Raigo's mobility in both earth and space. It also provides Raigo with full flight capabilities in the atmosphere and is equipped with beam sabers as well as hardpoints on its wing to carry various weapons such as missile pods. Due to the Speculum Striker's high output, it can withstand the weight of the added weaponry.

Similar to Sword Striker, the Caliburn Striker increases the suit's close combat capabilities. It features improved version of Sword Striker's weapons as well as a new armament. Mounted on the left arm is the "Panzer Eisen Kai" rocket anchor , the "Midas Messer Kai" Beam Boomerang is mounted on the right arm, and both "Schwert Gewehr Kai" anti-ship sword and the new "Caladbolg" large beam saber are mounted on the backpack.

Like the Launcher Striker, the Sumbullet Striker gives the Raigo long ranged combat capabilities. Its armaments include the "Agni Kai" hyper impulse beam cannon (an upgraded version of the Launcher Striker's "Agni" hyper impulse beam cannon), the "Todesblock Kai" plasma-sabot cannon (an advanced version of the GAT-X131 Calamity Gundam's "Todesblock" plasma-sabot bazooka), and a 8-tube missile launcher on the back. With a mixture of beams, physical rounds and missiles, it can launch various types of ranged attacks.

The latest version of Phase Shift armor, Raigo's VPS armor can change its colors according to which custom Another Trial Striker Pack is equipped at the moment.

The Actaeon Project's GAT-X105E Strike Gundam E represented the Earth Alliance military's future in versatile MS and represented a potentially new starting point in MS development. Fujiyama Company, a firm that participated in the Actaeon Project, planned to capitalize on this and start a development program based on the Strike Gundam E. Fujiyama Company, which mainly developed MA such as the FXet-565 Cosmograsper, was falling behind its competitors in the area of MS development. With the completed Raigo Gundam concept model, Fujiyama Company aimed to be reborn as a core company of the Earth Alliance's defense industry. The Raigo Gundam is deployed in Republic of East Asia, where a small scale battle is going on between EA and ZAFT, and is thus suitable for conducting field testing. 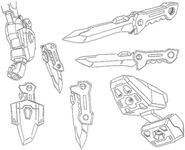 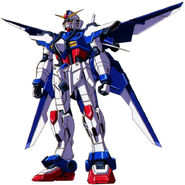 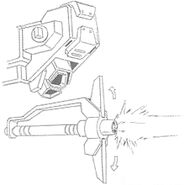 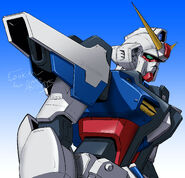 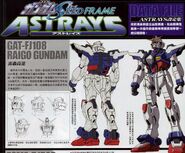 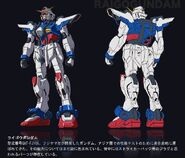 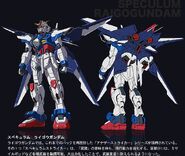 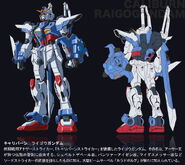 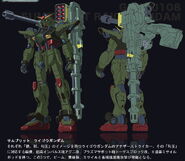