The GAT-707E Forbidden Vortex is a Mobile Suit in the series Gundam SEED Destiny.

The Forbidden Vortex is Earth Alliance's latest amphibious mobile suit and an identical copy of the prototype GAT-X255 Forbidden Blue, except that it also has reinforced titanium cockpit armor in addition to the "Geschmeidig Panzer" like the GAT-706S Deep Forbidden. Forbidden Vortex has exactly the same weaponry as Forbidden Blue and is thus armed with a phonon maser cannon, torpedo launchers, CIWS, machine guns, heavy scythes, and a trident. It also has tail extension, Trans-Phase armor and the ability to transform into a high-speed assault form. Besides solving the fatal flaw of the Forbidden Blue, the reinforced titanium cockpit armor also improves sinking depth and extends diving time.

The Phonon Maser Cannon is a sonic weapon that is unaffected by water, allowing it to function as an effective weapon both on land and in the sea. It is mounted on the backpack but only usable in high-speed assault form. This weapon is the only energy weapon installed on the suit.

A pair of them are mounted on the backpack identical to where the Forbidden Gundam's railguns are, and fire supercavitating torpedos, a type of torpedo faster than normal ones. They are usable only in high-speed assault form.

A pair of retractable close combat heavy scythes are built into each shield, for a total of four scythes.

Two of these light projectile weapons are mounted in the MS's head and usable only after the MS has surfaced. Although classified as Anti-Air, they can be used for missile interception and to destroy lightly armored vehicles.

Mounted on each forearm, usable only after the MS has surfaced.

Like the Forbidden Blue and Deep Forbidden, Forbidden Vortex is equipped with "Geschmeidig Panzer" energy deflection armor, which is mounted on the two shields of the suit. This system is primary used for moving through water and counteracting water pressure.

The Forbidden Vortex is equipped with a tail extension, which mounts an ultra-long-wave antenna, a towed sonar array and an anchor. The first two equipments grant the suit advanced sensor capabilities when used underwater, while the anchor can also be used as a close combat weapon due to its sharpness.

The suit is equipped with the Trans-Phase armor, like the one used on the Forbidden Blue.

Besides the one mounted on the tail extension, the Forbidden Vortex is equipped with a large number of different sensor systems, granting it superior underwater sensor capabilities. These sensors include IR sensors, a sonar, lorenzini sensors, and several ultra-low-light cameras.

Developed some time before the Second Alliance-PLANT War, an unknown number of units were built. During the second war, Forbidden Vortexes were deployed in the defense of Heaven's Base, the last military stronghold on Earth under control of Logos. 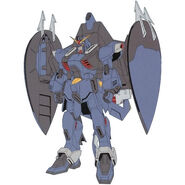 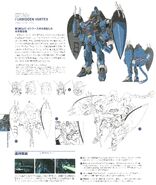