A new Earth Alliance mobile suit developed as a successor to the GAT-02L2 Dagger L, the GAT-04 Windam adopted data and know-how obtained from the Dagger Series and gained extremely high general capabilities.[1] Its development was deeply connected to the Junius Treaty signed in C.E. 72 that imposed restrictions on deployable mobile suits, resulting in an increase in demand for next-generation units with higher capabilities rather than modification of existing units.[2] Through inheriting the frame of the X100 Series units and with added thrusters on its legs and shoulders, the Windam's mobility and maneuverability within and outside the atmosphere have been enhanced.[2] It also has newly designed feet for walking more easily on rough terrain.[3]

It is said that the Windam realized the Earth Alliance's long-cherished wish to fully mass-produce the famous GAT-X105 Strike Gundam from the previous war. This is due to its overall performance being comparable to the Strike's and depending on its pilot, it can even compete against the ZAFT's New Millenium Series units.[2] In the hands of a skilled pilot like Neo Roanoke, the machine proved to be a challenge even to the ZGMF-X10A Freedom Gundam. Due to its excellent performance, the Windam was described as being one of the culminations of the Earth Alliance's mobile suits.[2] The Windam's standard armament is similar to the Dagger L's, consisting of CIWS guns, beam sabers, anti-armor penetrators, a new beam rifle, and shield.[2][3] Like its predecessors, the Windam is also compatible with the Striker Pack system, enabling it to handle a variety of missions.[2][3] However, its shoulder armor design prevents the mounting of the Sword or Launcher Striker Packs.

Two CIWS are located in the head and another two on the clavicle.[3] They are primarily for intercepting missiles or enemies at close range. Like the Dagger L, the Windam's use of the smaller caliber 12.5mm "Todesschrecken" CIWS as compared to the older 75mm "Igelstellung" CIWS allows it to store more ammunition for the weapon.[3]

The beam saber serves as the Windam's standard melee weapon, and its beam blade can cut through most non beam-resistant material. This model is the same as that used by the Dagger L. The Windam is equipped with two beam sabers stored on the top of the side armor.[3]

A small throwing knife that can also be used as a bomb, one is stored in each side armor.[3] After being thrown, the vernier at the back of the weapon propels it forward, and once it pierces the enemy's armor, it explodes to cause damage.[3]

The Windam's standard equipped beam weapon for ranged combat. This beam rifle is larger and more powerful than the beam carbine used by the Dagger L series.[2][3]

Mounted on the left forearm and/or handheld, it is a large physical shield and has a beam resistant coating.[2][3] This model is a new type of shield and is named as such as it carries missiles. The shield's tip has sharp blades for use in close combat.[2][3]

The shield mounts two missiles on the back.[2][3]

As with the 105 Dagger and Dagger L, the Windam can mount striker packs to adapt to different missions and environments.

The Windam was introduced in October C.E. 73, when a squad equipped with Multi Striker Packs was sent to destroy the PLANTs, shortly after the declaration of the Second Alliance-PLANT War. However, they and their supporting fleet were all destroyed by ZAFT's Neutron Stampeder. Soon afterwards, Windams equipped with the Jet Striker were deployed to oppose ZAFT's "Operation Spear of Twilight", in which large numbers of mobile suits were dropped to Earth to reinforce their Carpentaria and Gibraltar bases. Windams were also employed in a failed attempt to destroy ZAFT's battleship, Minerva, as it left Orb territorial waters, and in most major Earth Alliance operations on the planet thereafter such as the battles of Heaven's Base and Orb.

Neo Roanoke, commander of the 81st Independent Mobile Battalion, piloted a custom Windam with a unique purple and dark gray color scheme. Windams were also used by the renegade Earth Alliance forces that sided with ZAFT after the existence of Logos was exposed. The Earth Alliance also used Windam in large numbers in space in the last month of the second war, during which they were deployed without any Striker Pack or with the Doppelhorn Striker. The Windams were used to protect the emitter of the Requiem superweapon at the Daedalus Lunar Base as well as its relay stations. At the end of the war, a dozen Windams allied with the Three Ships Alliance to destroy Requiem, now controlled by ZAFT. 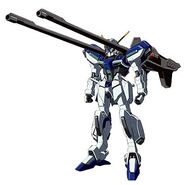 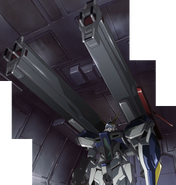 A Windam deployed by the Coalition of Volunteers (Gundam Build Divers) 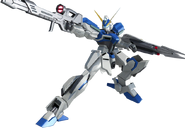 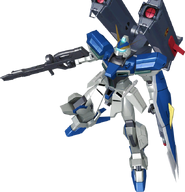