The GAT-04+AQM/E-A4E1 Jet Windam is a variant of the GAT-04 Windam featured in the anime Mobile Suit Gundam SEED Destiny. A custom unit is piloted by Neo Roanoke.

The Jet Windam is the GAT-04 Windam equipped with the AQM/E-A4E1 Jet Striker, a Striker Pack that improves mobility and grant flight capabilities in Earth's atmosphere, thus it is the mobile suit's standard equipment on Earth (although some Windams are seen using the old Aile Striker). With its flight capabilities, the Jet Windam has a distinct advantage over ZAFT's ZAKU series on Earth, possessing greater range, speed, and maneuverability. Furthermore, hardpoints beneath the wings can mount propellant tanks, along with a variety of additional equipment and weapons like missile launchers to bolster its offensive capabilities. The Jet Windam used by Neo Roanoke has the Jet Striker's various performance limiters removed or dialed back, allowing for increased output and higher speed.

Two CIWS are located in the head and another two on the clavicle. They are primarily for intercepting missiles or enemies at close range.

The beam saber serves as the Windam's standard melee weapon, and its beam blade can cut through most non beam-resistant material. This model is the same as that used by the Dagger L. The Windam is equipped with two beam sabers stored on the top of the side armor.

A small throwing knife that can also be used as a bomb, one is stored in each side armor. After being thrown, the vernier at the back of the weapon propels it forward, and once it pierces the enemy's armor, it explodes to cause damage.

The Windam's standard equipped beam weapon for ranged combat. This beam rifle is larger and more powerful than the beam carbine used by the Dagger L series.

Mounted on the left forearm and/or handheld, it is a large physical shield and has a beam resistant coating. This model is a new type of shield and is named as such as it carries missiles. The shield's tip has sharp blades for use in close combat.

The shield mounts two missiles on the back.

Rocket pods that can fire a barrage of unguided rockets at multiple targets.

During the Second Alliance-PLANT War, the Jet Windams were deployed in nearly all Earthbound battles, sometimes alongside the older GAT-02L2 Dagger L, which also used the same Jet Striker. The Jet Windam made its first known combat debut during Operation Spear of Twilight early in the war, when a relatively small force of Windams caused significant casualties to ZAKUs being dropped from space to reinforce the Carpentaria and Gibraltar garrisons. The Windams also took part in many battles against the ZAFT ship LHM-BB01 Minerva during its journey from the Carpentaria Base to the Gibraltar Base. The suits deployed in these battles however were shot down in massive number by the Minerva's mobile suits. One prominent exception was Neo Roanoke's custom Windam, whose Jet Striker was modified for greater mobility. He proved to be a formidable enemy even for ZAFT ace Athrun Zala. Neo's Windam was defeated in the Battle of Berlin by the ZGMF-X10A Freedom Gundam, although Neo was able to destroy the Freedom's shield using an anti-armor penetrator. Jet Windams were also deployed during ZAFT's attack on Heaven's Base.

At the Indian Ocean base

A Jet Windam that's part of the Earth Alliance forces that sided with ZAFT.

Head close up of Neo's unit 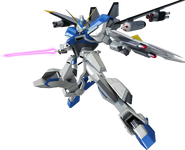 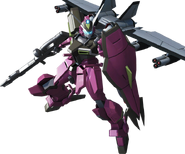