The GAT-02L2 Dagger L is a mass-production multi-mode mobile suit, it is featured in the anime series Mobile Suit Gundam SEED Destiny.

The GAT-02L2 Dagger L is the successor of the GAT-01A1 Dagger, it does not have the latter's laminated armor but has superior weaponry and retains the ability to mount Striker packs. The Dagger L's armament consists of four 12.5mm CIWS (twice the amount of CIWS than most other mobile suits have, and much smaller than the earlier mobile suit mounted CIWS weapons), two beam sabers, two rocket-propelled anti-armor penetrators and a physical shield for defense. The suit's main weapon is a handheld beam carbine, and can optionally use a low-recoil cannon for anti-ship combat.

The Dagger L is armed with 4 M2M5 Todesschrecken 12.5mm automatic CIWS. Two barrels are mounted in the head and two are mounted at the top of the shoulders. CIWS is typically inadequate for dealing with mobile suit-grade armor, but is sufficient for destroying small high speed targets such as missiles, small ground vehicles, and soft targets.

The ES04B beam saber serves as the Dagger L's standard melee weapon, and its beam blade is capable of cutting through most non beam-resistant material. The Dagger L is equipped with two beam sabers, that when not in use are stored on the hips, above the Anti-armor Penetrators.

The Mk315 "Stiletto" rocket-propelled anti-armor penetrators are dagger-like weapons, which are stored inside the suit's side armor. The penetrators can be used for close combat but are often used as throwing weapons, which can destroy a single suit if they hit a critical spot.

A handheld defensive equipment, it is used to intercept attacks that the pilot cannot, or will not dodge. The shield is also anti-beam coated and can block or deflect energy based attacks from beam weapons. The Dagger L uses the same type of shield as the GAT-01 Strike Dagger.

The M703K beam carbine is the standard ranged beam weapon of the Dagger L. The beam it fires is not as strong as that of most beam rifles but it is capable of rapid fire, and its small size make it easier to wield and very suitable for the mass attack tactics often employed by the Earth Alliance.

The Mk39 low-recoil cannon is a bazooka-like weapon and is an alternative to the M703K, however unlike the beam carbine the Mk39 does not draw energy from the mobile suit's battery. The damage caused by the Mk39 is more wide-spread.

Like the old GAT-01A1 105 Dagger, the Dagger L is capable of mounting Striker Packs such as the newer AQM/E-M11 Doppelhorn Striker pack for artillery bombardment, and the AQM/E-A4ME Jet Striker pack, which gives the Dagger L the ability to fly in an atmosphere and four hardpoints for missiles or rockets. The Dagger L is also compatible with the original Striker Packs, like the Launcher Striker and the Sword Striker.

During the last months of the first Bloody Valentine War, besides the mass-produced GAT-01 Strike Dagger, the Earth Alliance also produced in limited numbers the GAT-01A1 Dagger aka 105 Dagger, which is the "true" successor to the prototype GAT-X105 Strike. After the war, the EA stopped the production of the former and starts to mass-produce the latter. Later, the Dagger L is developed as the successor to the 105 Dagger and retains the ability to mount Striker Packs. These enhancements make the GAT-02L2's performance equal to that of ZAFT's ZGMF-601R GuAIZ R, but they fall short of the newer ZGMF-1000 ZAKU Warrior.

The Dagger L is first known to be used in the South American War of Independence, during which several of these suits, some using standard equipment while other used Launcher and Sword Striker Packs, are used by the EA to fight against the rebel forces of the USSA.

In CE 73, the Phantom Pain ship Girty Lue used four Dagger Ls (two normal unit and two Dark Dagger L ) to attack the ZAFT military colony Armory One, while three of its Extended humans stole three of the new Second Stage Series Gundams. The normal Dagger L were equipped with Doppelhorn Strikers and attacked a Nazca-class outside the colony, while the Dark Dagger Ls used a Mk39 Low-recoil Cannon each to destroy a Laurasia-class inside the space dock and eventually the dock itself. Two of these suits however were later destroyed by Minerva pilot Rey Za Burrel in his ZGMF-1001/M Blaze ZAKU Phantom during battle in the Debris Belt. After the fall of Junius Seven on Earth, the Alliance sent a fleet to take down the PLANTs with a large Dagger L force, going into battle against ZAFT's ZGMF-601R GuAIZ Rs, ZGMF-1000 ZAKU Warriors, ZGMF-1001 ZAKU Phantoms, ZGMF-1017 GINNs, and ZGMF-515 CGUEs.

The Dagger Ls were also used on Earth, mainly to defend EA bases, such as the one at Gulnahan Ravine. After the fallout of the Earth Alliance's failed attempt at destroying the PLANTs there was great unrest on Earth, particularly in the Eurasian Federation. Dagger Ls were used to suppress areas of unrest that showed. They were occasionally used for front-line combat, however this was, a rare event since at this time the Dagger L was already in the process of being replaced by the more advanced Windam, both on Earth and in space. Nevertheless, several Dagger Ls were used by renegade EA forces which had joined the Three Ships Alliance and fought against ZAFT during the last battle of the Second Bloody Valentine War.

A stealth operation variant of the Dagger L used by EA's special forces such as the Phantom Pain. It is identical to the normal Dagger L in all areas except that it has a darker paint scheme. 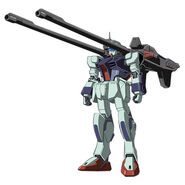 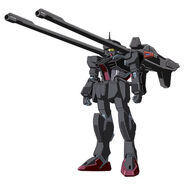 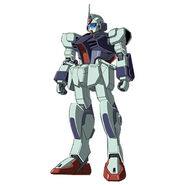 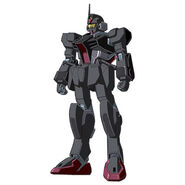 Retrieved from "https://gundam.fandom.com/wiki/GAT-02L2_Dagger_L?oldid=292568"
Community content is available under CC-BY-SA unless otherwise noted.