The GAT-01D Long Dagger is a high performance mobile suit, and first featured in the original design series SEED-MSV.

Unlike the GAT-01 Strike Dagger, which is hastily built for Naturals, the Long Dagger is a versatile, high performance unit created for Earth Alliance's Coordinators and the Socius series of Combat Coordinators. It inherited the concept of the GAT-X102 Duel Gundam and was developed simultaneously with the Strike Dagger. It has the simple structure of the GAT-X100 series (which Duel Gundam is a part of) while sharing more than 50% of its components with the Strike Dagger, resulting in excellent producibility. Its operating system (OS) is specified for Coordinators and Combat Coordinators, so it cannot be used by Naturals. The suit's superior performance over the Strike Dagger is in part due to various OS centered improvements.

Long Dagger retains the armaments of the Strike Dagger, but has twice the CIWS and beam sabers, and is known to use Duel Gundam's beam rifle and shield as alternate handheld weapons. Like the Strike Dagger, the Long Dagger cannot mount any Striker Packs. Instead, it has a set of add-on equipment similar to the Duel's Assault Shroud, called the Fortestra. The Fortestra provides the suit with extra armor, and a linear cannon on the right shoulder as well as a 8-tube missile pod on its left shoulder. Although the Fortestra has additional thrusters to offset the added weight, the suit's maneuverability is still hindered when under gravity. Thankfully, the Fortestra is ejectable and will release an intense flash capable of blinding the enemy during the process. When not equipped with Fortestra, the Long Dagger is as agile as the MBF-P03 Gundam Astray Blue Frame.

An early weaknesses of the Long Dagger is inadequate EMP shielding similar to those of the early Strike Dagger, but this is likely rectified after the Battle of Panama. Production of the Long Dagger ceased when its Natural-use OS counterpart, the GAT-01D1 Duel Dagger, was successful developed. Interestingly, the Long Dagger was originally called "Duel Dagger", and the name change occurred as some in the military were against the idea of naming a mobile suit after a unit that was captured by the enemy.

The same close combat weapon as used by the Strike Dagger, the Long Dagger has a pair of them stored on its side skirt armor. The beam sabers can slice through any armor that does not have an anti-beam coating

The Long Dagger can use the shield used by Strike Dagger or the one used by Duel Gundam. Both kinds of shields are similar, they have anti-beam coating to block or deflect energy based attacks from beam weapons, and a vision slit near the top.

Mounted on Fortestra's right shoulder, it operates on similar principle as the Duel Gundam's railgun but is clip-fed. It remedies the basic Long Dagger's lack of firepower in mid to long range.

Mounted on Fortestra's left shoulder, it is a basic high-explosive missile pod and is meant to compensate for the Fortestra's lower mobility.

One of two type of beam rifles that can be used by Long Dagger. This is the same beam rifle used by Duel Gundam and has an underslung single-shot grenade launcher.

The second type of beam rifle used by the Long Dagger, it is the same rifle as the one used by the Strike Dagger. A grenade launcher is mounted at the bottom.

Despite having high versatility, the Long Dagger's armor and firepower are relatively weak. To remedy these issues, a set of add-on equipment known as Fortestra (meaning 'strong dress') was developed. Not a part of the Long Dagger's original design, it was created based on the Archangel’s records of the Duel Gundam’s data from the ship's numerous fights against it. Particularly, the ZAFT's use of the Assault Shroud on the Duel Gundam was an inspiration for this equipment. The Fortestra includes additional armor mounted around the mobile suit's body, providing additional protection against enemy attacks, but it weighs the Long Dagger down and cuts mobility. To offset this, additional thrusters are included to improve mobility but it is still a problem when the suit operates under gravity. To improve offensive ability, a clip-fed linear cannon and an 8-tube missile pod is mounted on the additional shoulder armor. The Fortestra can be detached if it proves to be burden, and will releases an intense blinding flash so that the Long Dagger is not vulnerable during the process.

With the Strike Dagger's production being delayed by ZAFT's theft of the G Weapons, the Earth Alliance decided to develop the Long Dagger in parallel to fill the gap in its mobile suit force.[1] Two Long Daggers were later stolen by rogue Combat Coordinators, Eleven and Seven Socius, after testings were completed. They wanted to prove to the Earth Alliance that Combat Coordinators are still useful and not a threat. They challenged Gai Murakumo, who is rumoured to be the best MS pilot in the earth sphere, to a fight and won as Gai was unaware that he was fighting against two opponents. Taking the head of Gai's MBF-P03 Gundam Astray Blue Frame as a prize, they managed to contact an Alliance base but was told that attacking Gai meant nothing. They were then ordered to attack Gibraltar base. Before they could attack the base, they were intercepted by Gai and his MBF-P03secondL Gundam Astray Blue Frame Second L. Eleven and Seven accepted Gai's request for a rematch and were defeated. However, Gai did not kill them, instead he convinced them that they should reconsider their goals in life.

Another known Long Dagger, painted in his trademark white colors, was piloted by Jean Carry (a.k.a. "Glimmering Cursed Star J") in the Battle of Porta Panama. He briefly fought Yzak Jule and his Duel Gundam, but eventually Jean's Long Dagger was disabled by ZAFT's Gungnir EMP weapon. Jean however survived the massacre conducted by ZAFT and afterwards defected to the Three Ships Alliance, where he piloted an MBF-M1 M1 Astray at the end of the war.[2] 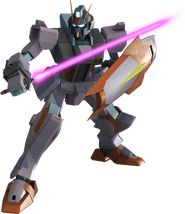 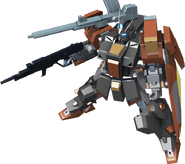 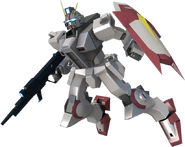 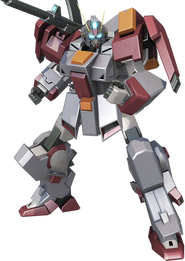