The suit's primary close combat weapon, it can slice through any armor that does not have an anti-beam coating. Two are stored on the side skirt armor.

The Duel Dagger can use the shield used by Strike Dagger or the one used by Duel Gundam. Both kind of shields are similar, they have anti-beam coating to block or deflect energy based attacks from beam weapons, and a vision slit near the top.

Mounted on Fortestra's right shoulder, it operates on similar principle as the Duel Gundam's railgun but is clip-fed. It remedies the basic Duel Dagger's lack of firepower in mid to long range.

Mounted on Fortestra's left shoulder, it is a basic high-explosive missile pod and is meant to compensate for the Fortestra's lower mobility.

The second type of beam rifle used by the Duel Dagger, it is the same rifle as the one used by GAT-01 Strike Dagger. A grenade launcher is mounted at the bottom.

Like the Long Dagger, the Duel Dagger can use a set of add-on equipment known as Fortestra (meaning 'strong dress') to remedy its relatively weak armor and firepower. The Fortestra includes additional armor mounted around the mobile suit's body, providing additional protection against enemy attacks, but it weighs the Duel Dagger down and cuts mobility. To offset this, additional thrusters are included to improve mobility but it is still a problem when the suit operates under gravity. To improve offensive ability, a clip-fed linear cannon and an 8-tube missile pod is mounted on the additional shoulder armor. The Fortestra can be detached if it proves to be burden, and will releases an intense blinding flash so that the Duel Dagger is not vulnerable during the process.

After its successful development, the Duel Dagger was put into production and the Long Dagger ceased to be produced. The Duel Dagger was given to and operated mainly by Alliance ace MS pilots, including Edward Harrelson and Rena Imelia. 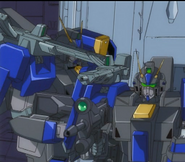 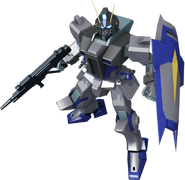