A customized GAT-01A1 Dagger used by the Phantom Pain unit. Besides the change in color, Slaughter Dagger is modified to be lighter and has its OS adjusted for better performance. Furthermore, it is equipped with an improved, higher output AQM/E-X01 Aile Striker as part of its standard equipment, granting it full flight capability in the atmosphere as well as improved mobility in space. The armament of the Slaughter Dagger is largely identical to the ones on the Dagger, except that it is equipped with a MX703G beam rifle instead of the handheld machine gun or the M703 beam rifle. Due to the use of the Aile Striker, an extra pair of beam sabers are also added to its armament. When necessary, the Aile Striker can be replaced by other Striker Packs that are more suited for the situation. Like the Dagger, Slaughter Dagger has laminated armor to protect its vital areas.

The primary handheld ranged weapon of the suit. Its outer appearance is identical to the GAU-8M2 52mm Machine Gun, but its internal component has been changed to those of a beam rifle's. It is a trial weapon and serve as a proof that shell and beam firing weapon can co-exist on a common platform

During the first Bloody Valentine War, the Earth Alliance created the GAT-01A1 Dagger, a mass-produced version of the prototype GAT-X105 Strike. The Dagger is able to mount the same Striker Packs as the Strike but due to its high production cost, the EA instead mass produced the more simplified GAT-01 Strike Dagger. The Slaughter Dagger is a special variation of the Dagger used by Phantom Pain special forces unit under the command of Logos. As a result, the Slaughter Daggers were used in many inhuman operations which the Phantom Pain conducted both on Earth and in space.

In CE 73, a group of Martians came with the Acidalium to the Earth Sphere to check the situation there and to meet with representatives of all superpowers. During the first meeting between the Martians and members of the EA (which were actually part of the Phantom Pain), the group was "greeted" by Slaughter Daggers. Shortly afterwards, another battle ensued and the Martians eventually fled. The group then reached the Orb Union but the Phantom Pain insisted that Orb helped them destroy the Martians. To keep this operation a secret, five Orb pilots were given Slaughter Daggers, each mounting a different Striker Pack, to attack the Acdialium. The whole task force was led by Phantom Pain and GAT-X105E+AQM/E-X09S Strike Noir pilot Sven Cal Payang. After the Mars ship left Orb's territory, the task force split up and attacked the ship. The Sword Slaughter Dagger, piloted by Hoskin Gira Sakato, used his rocket anchor to tether the Acidalium to the ground of the sea, while Gard Dell Hokuha in his Lightning Slaughter Dagger and Sars Sehm Elia in her Launcher Slaughter Dagger used the ranged weapons of their Striker Packs to attack the ship from afar. In the meantime, Vanfeldt Ria Lindsay in his Slaughter Dagger and Waid Rabby Nadaga in his Slaughter Dagger IWSP fought against the GSF-YAM01 Δ Astray, piloted by Ergnes Brahe. Hoskin eventually was defeated by Nahe Herschel in his GSF-YAM02 Guardshell, while both Sars and Gard were taken down by ZAFT pilot Isaac Mau in his TMF/A-802W2 Kerberos BuCUE Hound, who accompanied the Acidalium on orders from PLANT Supreme Council chairman Gilbert Durandal. Vanfelt is then shot down by Ergnes, while Waid's IWSP pack was taken by Sven (who had lost his own flight pack), causing the reckless Orb pilot to crash into the waters.

In CE 74, several Slaughter Daggers under the command of Sven were used to completely destroy a supposed terrorist camp. Some times later in space, a large Phantom Pain unit, which included several Slaughter Daggers attacked the DSSD space station to steal the GSX-401FW Stargazer. During the attack, they fought against the much weaker UT-1D Civilian Astray DSSD Custom as well as the Stargazer. Eventually the Phantom Pain fleet was destroyed. 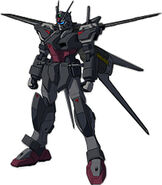 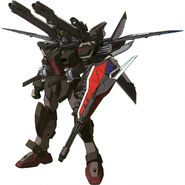 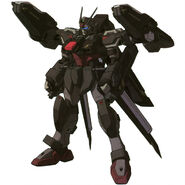 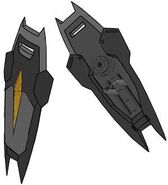 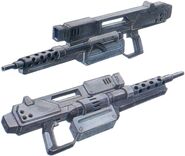 Beam Rifle
Add a photo to this gallery