The GAT-01A1 Dagger is the other mass-production mobile suit, besides the GAT-01 Strike Dagger, to be developed by the Alliance during the First Alliance-PLANT War using data from the GAT-X105 Strike Gundam. In fact, it is the "true" mass production MS that the Alliance had in mind, the Strike Dagger is a stripped-down version of it for quick production. The suit is commonly known as "105 Dagger" as it can utilize the Striker Packs used by Strike, and to differentiate it from the Strike Dagger. It also has the ability to be fitted with the same high-performance sensor suit used in the Strike's head and unlike the Strike Dagger, it is equipped with proper EMP shielding from the start, and fitted with two head-mounted antenna as well as CIWS, although the latter has been altered to use 40mm ammunition. Other armaments include a pair of foot-mounted 12.5mm anti-infantry guns, a pair of beam sabers mounted on the side armor, a shield for defense, and either a hand-held machine gun or beam rifle for ranged combat.

To reduce production cost, the 105 Dagger does not have Phase Shift Armor and instead is equipped with a modified version of laminated armor used by warships, like Archangel, on its vital areas. This also leads to the suit having better protection against beam weaponry. Furthermore, the lack of the power-intensive PS armor also increases the suit's effective combat endurance. During the war, only 23 units were manufactured, including 1 system verification unit and 2 prototypes. Production of the suit continues after the war ends and upgrades are continuously applied to the suit to keep it up to date. It is later replaced by the GAT-02L2 Dagger L sometime before the second war, but some units are still kept in service and they can use the new Striker Packs in use at that point.

The Dagger mounts two "Igelstellung II" 40mm multi-barrel CIWS guns in its head to shoot down incoming missiles or enemies at close range. Compared to the original "Igelstellung", these CIWS are smaller in caliber to increase the amount of ammunition available. By using the FCS automatic control system, the CIWS can automatically engage incoming enemy units.[1]

The Dagger's main close combat weapon, a pair of them are stored on the side skirt armor when in not use.

The most unusual armament of the Dagger are its shell-firing 12.5mm anti-infantry guns, one mounted on each foot. They are used to shoot down enemy soldiers on the ground and can cause severe damage to an area covered with humans. They are installed to avoid the criticism that against infantry, MS’s weapons are overkill.

One of the hand-held ranged weapons available to the suit. This weapon makes the Dagger one of the few Earth Alliance mass-produced mobile suits that can use a shell-firing weapon as their main handheld weapon, as most others use the more advanced and powerful beam guns/rifles. Although not as powerful as a beam weapon, it also does not drain energy from the suit's battery.

An alternative hand-held ranged weapon used by the Dagger, it is the same rifle as the one used by GAT-01 Strike Dagger. It can easily destroy a ZGMF-1017 GINN with one shot, but is mostly ineffective against armor with anti-beam coating. Has a grenade launcher at the bottom.

Another alternate hand-held ranged weapon used by the Dagger, it is the same weapon as the one used by the GAT-02L2 Dagger L. The beam it fires is not as strong as that of most beam rifles but it is capable of rapid-fire, and its small size makes it easier to wield and very suitable for the group tactics often employed by the Earth Alliance.

The same shield as used by Strike Dagger, it is meant to intercept attacks that the pilot cannot, or will not dodge. The shield is anti-beam coated to defend against attacks from beam weapons. However, the shield has its limit and can be damaged or even destroyed by extremely powerful attacks, such as a positron cannon blast.

Instead of PS armor, the suit is equipped with laminated armor to protect its vital areas. However, unlike the one used on warships like the Archangel, the armor used here is made of heat-resistant ablative gel DPX-30, which is more commonly used by warships for atmospheric re-entry. While this offered no increased protection against projectile weapons, it provided defense against mobile suit-scale beam weaponry.

The Dagger is the first mass-produced mobile suit capable of mounting the same Striker Packs used by the original GAT-X105 Strike Gundam, allowing it to adapt to different combat situations. It is also able to mount the newer Striker Packs developed after the first First Alliance-PLANT War.

In CE 71, the Earth Alliance rolled out its first five mobile suits as part of the secret G Project with the intention to create an own series of suits that could better fight against ZAFT's suits than the outclassed TS-MA2 Moebius mobile armors. One of these suits was the GAT-X105 Strike, which was able to mount Striker Packs to adapt to different situations. The Strike was also the only unit of the five prototypes which was not stolen by ZAFT. The EA eventually created the GAT-01A1 Dagger, the "true" mass production version of the Strike. However, due to the need to produce as much mobile suit as quickly as possible to fight against ZAFT, the EA instead mass-produced the GAT-01 Strike Dagger, an emergency model which was a stripped-down (and less expensive) version of the Dagger.

Nevertheless, the Alliance put the Dagger into limited mass production during the war and full-scale mass production started after the war. Due to its ability to use Striker Packs like the GAT-X105 Strike and the fact that the "Strike Dagger" name was already taken, it was nicknamed the "105 Dagger". The Daggers produced during the war were given to ace pilots like Morgan Chevalier, who used his suit with the AQM/E-X04 Gunbarrel Striker, thus forming the GAT-01A1+AQM/E-X04 Gunbarrel Dagger. Morgan used his Dagger in several battles of the war, among them the Second Battle of Jachin Due, as well as the South American War of Independence, during which he fought another EA ace pilot, Edward Harrelson. During the South American War, the GAT-01A1+AQM/E-X02 Sword Dagger seems to be a common model of mobile suit the EA sent to the area.

Eventually, both the Strike Dagger and Dagger were succeeded by the GAT-02L2 Dagger L, which was a combination of the two models and introduced sometime before the second war. The Dagger lineage was eventually succeeded in the second war by the GAT-04 Windam. However Earth Alliance's Phantom Pain unit still made use of an upgraded version of the Dagger, the GAT-01A2R Slaughter Dagger, while some of the standard Dagger was still kept in service and participated in the defense of Heaven's Base against a massive ZAFT attack during the Second Alliance-PLANT War, these units were equipped with Launcher and Jet Striker Packs. 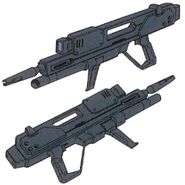 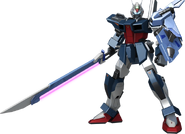 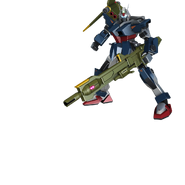 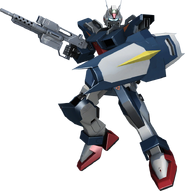 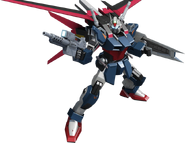