The G87 Luna Tank is a limited-production defense weapon developed by Principality of Zeon. It first appeared in the MSV-R series.

Developed as an auxiliary weapon for the defense of the Granada lunar base, it can only be operated under gravity of the moon and features caterpillar treads smaller than the main body. It is fitted with an underside rocket engine for flight during combat. The four panels on its sides are part of its flight system.

A series of three pods that emit a destructive plasma field in tandem. This weapon was installed on a Luna Tank for testing, and would later be used by the MA-06 Val Walo.

The development for the G87 Luna Tank began in U.C. 0077. By July of U.C. 0078, the first units were rolled out and 22 Luna Tanks had been completed by the time war broke out. In June of U.C. 0079, 12 more G87 Luna Tanks were built during the first half of the war, giving a total of 34 units produced. Twenty-eight units were lost during the upheaval in October of that year. After the war, all remaining Luna Tank units, disabled or operational, were dismantled. 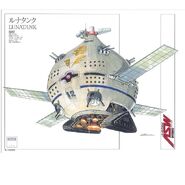 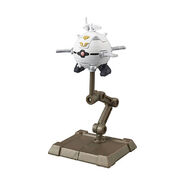 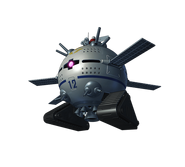