The G3-Saviour (pronounced "Gee Third Saviour", aka "G-Saviour") is a mobile suit and upgrade of the G-Saviour appearing in the G-Saviour video game. Developed by the Illuminati, it was piloted by ace pilot Reed Fox.

After the G-Saviour suffered heavy damage from previous battles, the members of the Saviour team redesigned and repaired the G-Saviour with newer components previously incorporated in the J-SAVIOUR J-Saviour.[1] The unit is given a design overhaul as well as newer weaponry and armor parts designed for all-terrain combat. Despite the changes in design, the key components of the G3-Saviour remain the same as the G-Saviour.[1] Overall the MS boasts higher mobility and armor durability, as well as a new beam rifle. In addition, the new double-jointed frame design allows for higher response speed.[2]

Like other mobile suits in the Saviour series, the G3-Saviour can use different modules to suit the combat situation. The Intensive-Attack Mode features thicker armor and two back-mounted cannons for long-range artillery. The Ground-Attack Mode features greater mobility and is equipped with additional armaments. It also features wheels on its feet for faster movement on terrain.

Overall the G3-Saviour outperforms all other current models, although it puts on a physical strain on its pilot.[1]

A single beam saber used for close range combat. Unlike the G-Saviour, the G3-Saviour's beam saber is emitted from a beam generator mounted to a hardpoint on the left arm. As such it cannot be used at the same time as the beam shield.

A shield that is emitted from a beam generator located on the left arm. It cannot be used at the same time as the beam saber.

Used on the Intensive-Attack Mode, two cannons are mounted on the back of the G3-Saviour. These cannons are used for long-range artillery fire, but are very heavy, reducing mobility.

Used in the Ground-Attack Mode, a two-barrel beam gun is mounted on a hardpoint on the right arm.

A back mounted cannon equipped in the Ground-Attack Mode. Swings from the back when active, under the right arm.

A weapon with high rates of fire, it is mounted onto the backpack in Ground-Attack Mode and positioned below the left arm.

A missile pod used by the Ground-Attack Mode, it is mounted over the left shoulder, on the backpack.

An attachment point for weapons, shields, spare ammunition, or optional equipment. Hardpoints can also be used to store carried weapons when a mobile suit needs its manipulators free for other purposes.

An optional loadout for the G3-Saviour. This equipment includes a new backpack with additional thrusters, as well as wheel attachments for the sole of the feet, greatly increasing mobility on terrain. The leg hover units have also been removed, and a beam gun attached to the hardpoint on its right arm. It is also equipped with range of new armaments mounted on a new backpack: a buster cannon, a gatling gun and a missile pod.

An optional heavy weaponry loadout for the G3-Saviour. This mode is the heaviest of the equipment sets, and features two back-mounted cannons, as well as thicker armor.[3]

The G-Saviour was heavily damaged during a battle against the Raven, before it was rescued by a squad of J-Saviours. Two weeks after the battle, Reed insisted on piloting a MS despite still recovering from his injuries. Ben gave Reed the G3-Saviour to pilot during the Lightning Squad's assault on Dry Valley, a CAF base. After destroying most of the base's defenses, consisting mainly of MW-Raids, the last remaining CAF soldier, Kite Goldman, and his Spearhead Cannon Type were defeated by Reed and the base was captured by the Illuminati.

Following the fall of Dry Valley, the Lightning Squad headed to Tokyo where an attempted coup d'état by the Gremly Sheep was taking place. Reed sortied in the Intensive-Attack Mode and destroyed most of the coup d'état MS. The Gremly Sheep forces retreated, leaving MW-Raids for Reed to fight.

The Lightning Squad subsequently attacked the Kilimanjaro Fortress, where MW A.I. was being developed. Reed took out most of the turrets and the shield generator, and defeated the Spearhead (Ballistic Type) left guarding the fortress.

During the assault on the Angel Halo MW factory, Reed fought against several MW-Raid units, noting their movements to be on par with those of an actual human pilot.

Returning to Tokyo after a second coup attempt by the Gremly Sheep, Reed duels Major Richard Rite and his Bugu II. After suppressing the coup attempt, the Lightning Squad return to the dropped colony, where Reed faces Rysis and his Raven. In the aftermath of the battle, the G3-Saviour's onboard systems fail temporarily due to damage, as the colony falls apart. However, Reed is able to barely escape after the systems begin to work again. 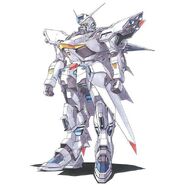 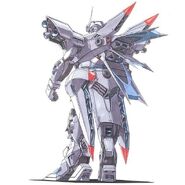 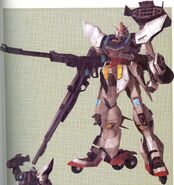 Retrieved from "https://gundam.fandom.com/wiki/G3-Saviour?oldid=465450"
Community content is available under CC-BY-SA unless otherwise noted.