The G2-Saviour (aka "G-Saviour", pronounced "Gee Second Saviour") is a mobile suit appearing in the June 2000 issue of Hobby Japan.

An issue with previous mobile suits designed by the Saviour team, such as the G-Saviour, was the slow response speed of the rigid single-jointed frame. The G2-Saviour uses an experimental double-jointed frame, which has overall improved the flexibility and responsiveness of the frame.[1] Overall it is an improvement over the G-Saviour in terms of speed and maneuverability. However, due to the changes to the frame, the area from the knee to the ankles of the mobile suit have become bulky, so thrusters have been added to increase mobility.[1]

A pair of vulcan guns located in the head. Not as powerful as beam weapons, but good for shooting down enemies who are up close.

A rapid-fire beam rifle, it is the same type used by the G-Saviour.

Standard beam sabers used for close range combat. The G2-Saviour is equipped with two beam sabers, one stored on the backpack and the other emitted from a left forearm-mounted beam generator.

A shield that is emitted from a beam generator located on the left arm.

A new mobile suit frame constructed by the Saviour team that was first tested on the G2-Saviour.[1] The double-jointed frame is more responsive than the rigid single-jointed frame of the G-Saviour, and was later used in the G3-Saviour and J-SAVIOUR J-Saviour.

The G2-Saviour was originally built to test a new double-jointed mobile suit frame, to be used as an optional replacement part for the G-Saviour's single-jointed frame.[1] However, its performance during testing proved so exceptional that this frame became the new standard for Illuminati's line of mobile suits, such as the J-Saviour. Additionally, equipment tested on the G2-Saviour was later incorporated into the G3-Saviour.

1/72 scratch-built reference Gunpla by Atelier-Sai.
Add a photo to this gallery 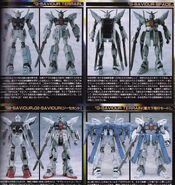 Retrieved from "https://gundam.fandom.com/wiki/G2-Saviour?oldid=442494"
Community content is available under CC-BY-SA unless otherwise noted.