The G-Sky Easy appears in the Mobile Suit Gundam series.

G-Sky Easy is created by combining the FF-X7 Core Fighter from either the RX-77-2 Guncannon or RX-75-4 Guntank with the B Block section from the G-Fighter. This is also notably the only combination that does not involve using any of the RX-78-2 Gundam's modular components (the G-Bull Easy uses two shields for defense), enabling the Gundam to remain active during this combination.

Equipped on the nose of the Core Fighter. While essentially ineffectual against mobile suits' armor, they are useful in intercepting incoming missiles/rockets, destroying mobile suit sensors, and engaging lightly-armored vehicles.

Two missile launchers are located in the Core Fighter's main body, one in the left and the other in the right side. The launchers are open-hatched design, and pops up from the top surface when in use.

The two missile launchers are loaded with the AIM-79 air-to-air missiles, which are used for bombardment or dealing damage to heavily armored enemies that the vulcan guns are incapable of.

In addition to the missile launchers, an AIM-77D air-to-air missile can be mounted optionally on each wing via the wing pylons, thus augmenting the Core Fighter's air-to-air combat capacity. 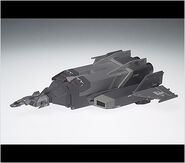 Retrieved from "https://gundam.fandom.com/wiki/G-Sky_Easy?oldid=442798"
Community content is available under CC-BY-SA unless otherwise noted.