G-Saviour Sound Cinema is a radio drama series broadcast on Japanese FM stations prior to the G-Saviour film. Set in the Universal Century, it is a series of three stories that take place before the events of the film, serving as a prequel. These were released on CD in December 2000 by Pioneer LDC.

At Side 2, Congressional Armed Forces burn the crops of farms. CAF ace pilot Andria Grachet, known by his nickname "Grim Reaper Icarus", lands his black mobile suit in a grape orchard. As he exits his cockpit, the farmer and his wife confront him. The farmer aims a rifle at Andria and threatens to shoot him for ruining the harvest. Although Andria attempts to talk him into putting down the rifle, he refuses, leading to the Bugus shooting him and his wife. Elicia Erg, their blind daughter, overhears the events and remembers Andria's black helmet with red wings.

Years later, Andria has left the Congressional Armed Forces and changed his name to Andy Sinclair. He is able to smuggle Elicia to Earth. Hiding his past, the pair settle on a grape orchard in an European agriculture district controlled by the Congress of Settlement Nations. Andy, guilt-ridden over causing her parents deaths, strives to live a peaceful life with Elicia and fulfill her father's legacy. Elicia has recurring nightmares about the day her parents were killed.

The corrupt local governor, Cliff, seeks to industrialize the local agricultural areas into military facilities for his own political gain. This is met with resistance from the local farmers. In response, the governor deploys the local Congressional Armed Forces to burn the fields and kill the families of those who opposed the industrialization of the sector. As a result, a resistance group called Club Four forms. The Saviour team arrives with the F-SAVIOUR F-Saviour to assist them. At the same time, Mimi Devere arrives to investigate Cliff's activities.

Paolo and Ryoya, members of Club Four, approach Elicia to convince Andy to become a pilot for them, after witnessing his skill with piloting agricultural mobile suits. Elicia refuses, as she does not want Andy to participate in combat.

Suddenly, Congressional Armed Forces mobile suits attack, under the pretext of knowing the location of the Club Four leader, Cerulean. Elicia is knocked unconscious as she attempts to escape, while several Club Four members are killed. She is discovered by Mimi, who takes Elicia to her room in a local government building.

After Andy arrives home to find Elicia missing, Paolo and Ryoya ask Andy to pilot the F-Saviour to find Elicia. Andy agrees, on the condition that they kill him if he loses control. Paolo and Ryoya, upon seeing Andy's black helmet with red wings, along with his apparent experience with military MS, correctly deduce Andy is "Grim Reaper Icarus". Club Four attacks the local government buildings with their mobile suits from the Saviour team. Andy is able to easily destroy several mobile suits, due to his piloting skills and the high performance of the F-Saviour.

While watching the battle with her CONSENT superior, Sizzleine Foster, Mimi is unable to find any record of "Andy Sinclair". Foster also notes the F-Saviour's black colors and military combat abilities. Realizing Elicia might be connected to Club Four, Mimi runs to her room only to find it empty. Determined to find Andy, Elicia had wandered her way out of the building by listening to footsteps. Mimi follows her and tries to convince her to return to the building, but she refuses. Elicia believes Andy only took care of her out of sympathy over her parents' deaths, but Mimi convinces her otherwise, that it was out of love.

As the battle begins to settle down, Andy begins to go berserk, shooting at Club Four mobile suits. Determined to stop Andy, Elicia yells for Andy to stop fighting, but he is unable to hear her. With the help of Mimi however, Elicia uses an intercom system to talk to Andy. Elicia reminds him he is no longer the "Grim Reaper Icarus" who killed her parents. This calms Andy down, who exits the F-Saviour.

Following these events, the governor is arrested following an internal investigation. The Congress halts all of the governor's plans, given the current agricultural crisis. Mimi is given Andy's helmet as a souvenir, although she considers throwing it away, as "the Grim Reaper Icarus has already disappeared".

G-Saviour Sound Cinema 02: Before the Mission

In U.C. 0223, the Saviour team tests the prototype G-Saviour. System engineer Barry Adams is piloting the G-Saviour 702 (Unit 2) as April O'Reilly and Joyce Santayana of the Saviour team monitor the test from the Nimbus. Suddenly, the G-Saviour malfunctions and Barry loses control, crashing into debris and exploding, killing Barry.

To continue testing, Illuminati leader Phillippe San Simeone meets with April at the Side 4 Settlement of New Manhattan. Phillippe promises to deliver the G-Saviour 703 (Unit 3) within three days, but asks April to find a replacement system engineer by that time. April and Joyce go to a bar frequented by former CONSENT members and are approached by a man who convinces them to sing karaoke with him. He soon introduces himself as Abner Saviour, former CONSENT system engineer and the son of John Saviour, the lead designer of the Saviour team. The Illuminati's intel indicates Abner was discharged from the CAF in October U.C. 0221.

Meanwhile, at the bar, April asks Abner to order the best drink in the bar, the "Phillippe margarita". Abner complies, unaware this is code for meeting with Phillippe. Phillippe invites Abner to join the Illuminati, although Abner refuses until he is shown the G-Saviour.

Abner joins April's team as the test pilot of the G-Saviour Unit 3. During a meeting of Illuminati members, Mark Curran, who is en route to Side 4 after escaping from Earth, is chosen as the new pilot of the G-Saviour. Due to the limited time, system engineer Sydney Rowland Schwartz insists on testing with live ammunition. April refuses, although acknowledging they cannot give Mark a non-combat ready mobile suit. Abner accepts the risks, with Sydney reassuring the group that he will program the MW-Rais to avoid hitting the G-Saviour.

Before the test, Abner reveals the truth behind his discharge to April. Abner had been part of the development of the MW-Rai, in an attempt to surpass his father. This caused a falling out with his father, who did not believe in Mobile Weapons. During a test with the MW-Rai, a malfunction caused the MW-Rai to go out of control and destroy the testing facility. Feeling responsible for the incident, John Saviour disappeared from CONSENT and later joined the Illuminati.

During the test, an explosion causes contact with Abner to be lost. The MW-Rais also activate, targetting the G-Saviour. The Saviour team realize Sydney sabotaged the tests and was a CAF operative. Abner manages to defeat the MW-Rais and find his way back to the Nimbus, with the necessary data. The data is used to make final adjustments to the G-Saviour, in time for Mark's arrival to Side 4.

Maurice Riva, a New York University student, is the star of the college baseball team. His father, Doctor Riva, is working on research concerning bioluminescence, which could revitalize the Earth's agricultural capabilities. However, Doctor Riva is soon assassinated by the Congressional Armed Forces, who seek to suppress this discovery. 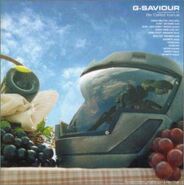 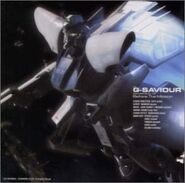 G-Saviour Sound Cinema 02: Before the Mission 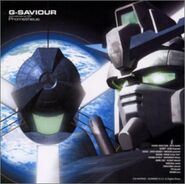 Retrieved from "https://gundam.fandom.com/wiki/G-Saviour_Sound_Cinema?oldid=460346"
Community content is available under CC-BY-SA unless otherwise noted.