The G-SAVIOUR G-Saviour Origin Mode is the titular mobile suit of the G-Saviour series. Developed by the Illuminati, it was piloted by ex-CONSENT pilot Mark Curran and later Illuminati pilot Reed Fox.

The G-Saviour was built with a skeletal frame so that it could be equipped with interchangeable modules to make it adaptable for both space and land. Another benefit of the frame is that it can eject parts of its armor, which proves useful if the limbs should become trapped. The modules are equipped in special hangars designed for Saviour series mobile suits.[1] Without any modules equipped, the G-Saviour is referred to as the G-Saviour Origin Mode.

The G-Saviour's EFX-8 Type cockpit also has a life support system capable of sustaining a pilot for up to 72 hours.[1] Its overall performance exceeds most CONSENT mobile suits.[2]

The G-Saviour is part of the Saviour line of mobile suits developed by the Saviour team, headed by former CONSENT MS engineer, John Saviour. The Saviour team referred to its design concept as an "evolving mobile suit".[3] Its Gundam-like head is modeled after the legendary mobile suits used earlier in the history of the Universal Century.[3]

A pair of vulcan guns located in the head. Used to thwart enemy movement.

A single beam saber used for close range combat. It is light blue in color.

A shield that is emitted from a beam generator located on the left forearm.

A variety of universal weapons can be equipped to the G-Saviour.[2] The only one seen is the beam rifle.

A rapid-fire beam rifle that shoots blue beams. It can be stored on the rear skirt armor when not in use.

Compatible modules that can be swapped to suit the conditions of the battlefield. The ones seen are the Space Mode, Terrain Mode and Terrain Mode Hover Type modules.

In order to combat CONSENT, as it imposed its oppressive policies on the Settlements, the Illuminati needed to construct mobile suits that could match those of the Congressional Armed Forces. Its mobile suit engineers formed the Saviour team, headed by John Saviour. Many of these engineers had defected from CONSENT and had been designing mobile suits since the period before the collapse of the Earth Federation.[2] This resulted in the production of the Saviour series, with the G-Saviour being the latest model rolled out in U.C. 0223. The G-Saviour's test pilot during its development included Barry Adams, who piloted Unit 2, and Abner Saviour, who piloted Unit 3.[3]

When a group of Gaeans, on the run from CONSENT soldiers, escape to Side 4, they are met by the leader of Illuminati, Phillippe San Simeone. He takes them in and shows Mark Curran the G-Saviour, wanting him to pilot it and fight for their cause. Mark refuses, but later boards the G-Saviour in its Space Mode to clear debris blocking the only safe route to Side 8. However the Congressional Armed Forces follow them and declares war on Gaea. While they formally ask the Gaeans to surrender, CONSENT jams communications in Gaea, preventing any kind of surrender message. The Gaeans decide to fight back, but the battle quickly turns in CONSENT's favor, as the RGM-196 Freedoms are severely outmatched by the much more powerful Bugus and MW-Rais. Due to this, Mark sorties in the G-Saviour in its Space Mode to repel the enemy and soon encounters Jack Halle in his MS-Rai. Mark and Jack fight each other, with Mark managing to disable the latter instead of killing him. The G-Saviour is then ambushed by a squad of MW-Rais, but is saved by Phillippe in the I-SAVIOUR Illusion, who tells Mark to deal with the Bugus inside the colony. Mark returns to Gaea and has the G-Saviour converted into its Terrain Mode, and promptly destroys the Bugus as the battle reaches its end.

Some time after the Battle of Side 8, Illuminati hears of CONSENT's new mobile suit development project, code named "Project Raven". They task their Lighting Squad with destroying the new units, and assign squad member Reed Fox to pilot the G-Saviour for the mission. After the G-Saviour is severely damaged by the CAMS-15 Raven mobile weapon, it is upgraded into the G3-Saviour. It is unknown what happened to the G-Saviour modules after this. 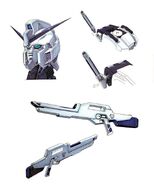 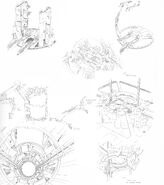 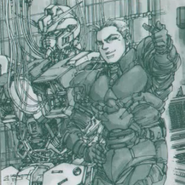 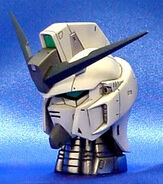 G-Saviour model head miniature
Add a photo to this gallery

Retrieved from "https://gundam.fandom.com/wiki/G-SAVIOUR_G-Saviour_Origin_Mode?oldid=464344"
Community content is available under CC-BY-SA unless otherwise noted.