The G-M2F Zssan is a mobile suit from the Correct Century timeline and the successor of the AMX-102 Zssa.

The Zssan is quite different from normal Zssa with a different frame and blue paint job. It carries less missiles and lacks other armaments such as the beam rifle utilized by Zssa. Instead, Zssan's arms can deliver the "arm punch" attack, by launching its fist outward and increasing its impact punching force (similar to Zssa's partner machine in Universal Century era, the AMX-101 Galluss-J). It's 6-tube leg missile launchers are usually loaded with wire anchors that can be used in close range combat. While Zssan is never seen equipped with any optional booster pack, it is always armed with a single 7-tube missile pod similar to one used by the Zssa.

Like most MS deployed by Ghingham's forces, there are unmanned units of the Zssan which can be remote controlled by a squad leader pilot. These unmanned Zssan most likely use similar technology to the Mobile Doll system of After Colony era.

A replica of the AMX-102 Zssa discovered by Gym Ghingham's forces in the Moon Mountain Cycle. 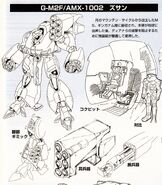 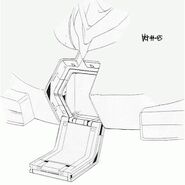 Retrieved from "https://gundam.fandom.com/wiki/G-M2F_Zssan?oldid=456852"
Community content is available under CC-BY-SA unless otherwise noted.