The G-M1F Bandit (aka XM-0754 Bandai) is a mobile suit that appears in the Turn A Gundam series.

The Bandit was originally a police unit designed to deal with MS crimes. Therefore it is armed for capturing MS. The back weapon rack seems to have been prepared for options such as knives and scissors. The Bandit features a rare standing type cockpit. It is possible for the Bandit to act without a pilot, via unknown unmanned control methods.

Mounted on the back pylons. These devices are for destroying enemy units without killing the pilot, and are packaged with heat hawks with sensor eyes and restraining wires.

The Bandit can secrete hardening nanomachines from its frame, which dramatically improve its durability.

The Bandits were sealed away after the use of nanomachines was forbidden. Several units were uncovered from the lunar Mountain Cycle in 2345 C.C. One of these units would be piloted by Merrybell Gadget, while others were controlled via unmanned methods. 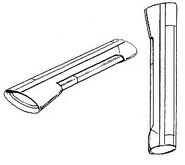 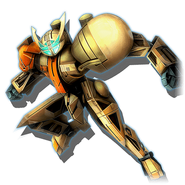 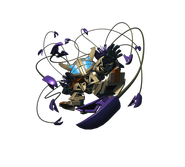 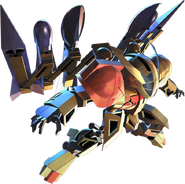 Retrieved from "https://gundam.fandom.com/wiki/G-M1F_Bandit?oldid=495881"
Community content is available under CC-BY-SA unless otherwise noted.